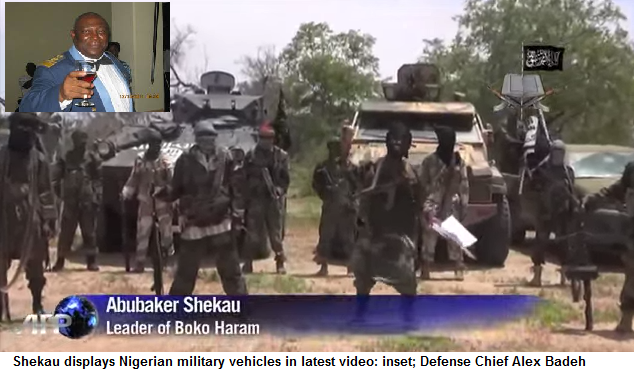 A lot of lies can be hidden in the truth.

Thousands have died in the violence in Nigeria’s northeast between Boko Haram insurgents and the security forces, with no end in sight to the bloodletting.

Bombings and shootings by the Salafist group after five years of insurrection, is now being capped with the group holding towns, in the state of Borno, Yobe and parts of Adamawa; a fortnight ago, leader Abubaker Shekau announced a self-declared caliphate.

Before I go further in my admonition and intervention on this matter, let me share this two fables…It may need a second reading to decipher, but bare with me and let us reason in the next few paragraphs.

A father decided to take his son abroad to learn English because it has proven to be impossible in Nigeria. He took him to a language school in UK and demanded that the school should have him stay with a host family (An English family).

After 6 months, the father decided to pay his son a surprise visit. He called the school, got the host family’s address and dropped there without notice.

When he rang the doorbell, an English lady in her 40’s answered the door.

ENGLISH LADY: Hello, how may I help you?

FATHER: Hello, I am Adamu’s father. I’m here to see my son.

ENGLISH LADY: Hi, I’m his host mother. I will get him for you.

Moral: Boko Haram is changing us, I am not an advocate of bashing the Nigerian Army or Nigerian security personnel, however I am not oblivious of the fact that for a complexity of many intertwined dynamics, the army is failing, and may continue to fail not because it wants to fail but because it is set out to fail.

Do many Nigerians and I want the army to fail, my honest opinion: No is the answer, but beyond rallying behind the army verbally Boko Haram is teaching the English host to speak Hausa rather that the other way round.

For example we have a 7th Division that exist only on paper with all its constituent units chopped out of other Divisions creating half strength divisions.

The latest information at my disposal is that Nigerian troops had as of Saturday last week, raided the hideout of Boko Haram in Kawuri, Konduga Local Government Area of Borno State. Killed some 50 terrorists in the raid, but the source of the information was a Defence Headquarters tweet.

The question is why is too difficult for the Nigeria Army to embed Nigerian Journalists alongside, is it so difficult, sadly to date all the experts and  negoitiators on our conflicts have to be a Dr. Davis and co, and if it is my humble self, no one believes.

Why can we not get those eyewitness reports, all these “We have captured Gwoza—Shekau” and “No, it is a lie—Army Spokesman” back and forth, who does it benefit.

And the foregoing above is one of the many reasons, why a Steven Davis dimension has been added to the mix, and it has further reinforced my belief that this nation needs a knowledge based revolution, a body polity shake up. Or else if we keep towing this line and continue this Boko Haram joke, sooner or later ala Libya, trouble looms, there will be guerilla warfare everywhere. A big arms market and profitable humanitarian crisis field.

Indeed, it is safe to say, Allah forbid, it is convenient to limit the disaster to a section of the nation but it would consume us all

It is sad when persons with supposed education or masquerading as intellectuals pour conspiracies into public space, my friend SFD captures it when he says, “the Lugardian experiment in divide and rule has succeeded beyond his wildest dreams.”

Meanwhile, even as many Nigerians take information from the Department of State Services, DSS, with a pinch of salt, the Department has denied being the source of the information credited to Australian Boko Haram hostage negotiator, Dr. Steven Davis, describing him as “a self-styled and self-appointed negotiator.”

I do not think Nigerians understand what sponsorship of Boko Haram means, the kind of resources being put into it, and for a sizable population to believe the rabble rousing of some Central Bank of Nigeria staff story, only further takes conspiracy theories to another level.

I am not going to hold brief for past Chief of Army Staff, COAS, Lt. Gen. Azubuike Ihejirika as a financier of the deadly Boko Haram.

And even though, the department said it couldn’t be true that the immediate past army chief was a financier and it would be wicked of anyone to link him with the sect, I take the department’s words with a pinch of salt.

However I would add my second fable and round up this intervention.

Joe decides to take his boss Phil to play 9 holes on their lunch. While both men are playing excellent, two women in front of them often hold them up moving at a very slow pace.

Joe offers to talk to the women and see if they can speed it up a bit. He gets about half of the way there stops and jogs back.

His boss asks what the problem is. “Well one of those women is my wife and the other my mistress,” complained Joe.

Phil just shook his head at Joe and started toward the women determined to finish his round of golf. Preparing to ask the ladies to speed up their game, he too stopped short and turned around.

As controversy rages over the allegations against Senator Ali Modu Sheriff and Lt. Gen. Azubuike Ihejirika (rtd) by Dr. Steven Davis, on Boko Haram sponsorship, the Nigeria Bar Association (NBA) in Borno state disclosed that it would send nothing less than 50 lawyers to the International Criminal Court–the joke is on us.

Fact is that the Yusufiyya goons called Boko Haram have taken over Gulak, killed several persons and a certain Ahmed Gulak, and clown is contesting to be governor of a state his hometown has ceased to be part.

It’s three weeks now, the Police training school, Gwoza is still under Boko’ occupation, and several policeman still missing.  The army keeps reassuring us, Maiduguri residents are not at peace, politicians are playing politics and doing a crankum crankom of who did it, and could I not mention the Chibok girls, I am sure I would be talking as we approach 200 days of their abduction.

And while we continue to dance around all sorts of conspiracies and do the deafening musical chairs of blame games, the Boko Haram dudes are having not only a ball, but also a dangerous joke on us all, need I remind us all that when in a hole, you do not dig—will we conquer, only time will tell!