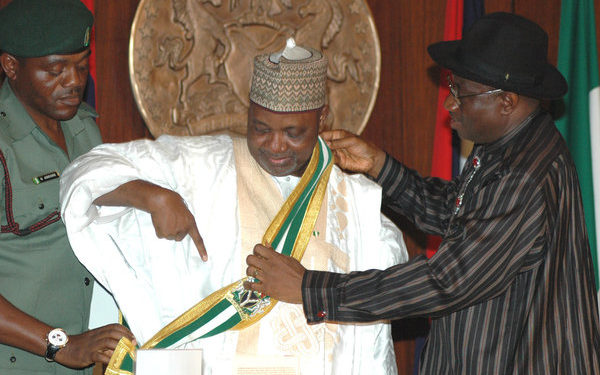 The attempt to hand over a critical government communication frequency to Emeka Offor, has spanned three governments.

Nigeria’s Vice President Namadi Sambo is leading a surprising push for the sale of a key police security communication frequency to controversial businessman, Emeka Offor, brushing aside warnings by a top government panel about the implications for national security, PREMIUM TIMES can report today.

Openskys Services Limited, a firm owned by Mr. Offor, first got the government’s nod in 2009 to take over the 450 Megahertz frequency, a strategic police channel that has grown even more useful with escalating threats from extremist group, Boko Haram.

The deal was characterised by controversy lasting years, with the police refusing to surrender the lucrative medium which Openskys Limited planned to deploy commercially for high-speed internet and smart phone data needs.

A government advisory panel named by Mr. Sambo himself, which includes two ministers – Abdul Adesiyan of police affairs and Omobolaji Johnson of communication- now wants the deal reversed, calling it a “compromise” of national security.

The committee, which also includes a permanent secretary and other officials, also asked the government to reject an alternative offer from Openskys Limited to partner with the police affairs ministry and manage an important police security project configured on the contentious 450 Megahertz frequency.

That security project is the National Public Security Communications Systems, NPSCS, the largely failed closed circuit television infrastructure installed around the federal capital, Abuja, in response to Boko Haram’s growing threat between 2010 and 2012.

The two recommendations by the committee were rejected by Mr. Sambo in April, senior government officials well briefed about the workings of the committee said.

But the officials who spoke to us point at the vice president’s defiance as part of a decade-old plot by three administrations- Olusegun Obasanjo, Umaru Yar’adua and now Goodluck Jonathan- to subtly hand over the lucrative 450 Megahertz slot to Mr. Offor, a longstanding financier of the ruling Peoples Democratic Party, PDP.

Ownership of the high-end 450 Megahertz has been steeped in controversy since 2004 when the Obasanjo administration ordered original users of the frequency, to be allotted a new channel.

The 450 Megahertz was originally used by the Nigeria Police, oil firms Chevron and Shell, and a few others until November 2004 when the National Frequency Management Council, NFMC, issued an order to relocate the previous users.

By July 2007, without any required bidding, a presidential directive from President Umaru Yar’adua ordered the vacant frequency be transferred to NigComSat, Nigeria’s satellite company.

But under a so-called government’s liberalization of the communication sector, the presidential directive required that NigComSat partner with a private firm before taking up the new slot.

That partner turned out to be Openskys Limited.

Officials in the presidency, the police affairs ministry and the communication ministry, who have monitored the events for years said the NigComSat arrangement was to merely provide a sham vehicle to transfer ownership of the channel to Mr. Offor, as compensation for years of loyal support to the party.

A pointer to that fact is reflected in how Openskys suddenly emerged the majority shareholder of the partnership shortly after takeover.

But Openskys Limited was yet to meet the conditions for completing the transfer from police which included payment of N1.2 billion as quoted fee for the frequency to the Nigerian Communications Commission, NCC; payment of N350 million to the police to re-tune its old trans-receivers resulting from the relocation.

By 2010 when the federal government launched the security communication programme, NPSCS, in response to Boko Haram’s increasing violence, the police received permission to install the project on the 450Megahertz, given the urgency of the security situation in the country.

The security systems was administered for the police by NigComSat, the government-owned satellite company.

Openskys Limited later completed its payment and assumed full control of the frequency. And as new owners of the frequency, the firm has now proposed to partner with the police affairs ministry, and take over the management and operation of the NPSCS.

While that happens, the company will deploy part of the frequency for commercial purposes, including high speed Internet and communication.

The mandate of the inter-ministerial committee, named by the vice president, was to review that proposal and make recommendations as the nation faces renewed threats in Abuja and elsewhere. That meeting held April 9, 2014.

In its 11-page report, the panel warned of national security risk if the deal is allowed to go through, and urged that NigComSat be allowed to run the programme for the police alone.

“In the light of the foregoing, and in consideration of the technical and strategic intelligence nature of the NPSCS project, the adoption of a commercial entity for the commercialization of the network would compromise the confidentiality of communications operations,” the committee said.

The committee advised that NigComSat, “being a wholly indigenous company with representation of government, is regarded as the appropriate entity to assist the government in the project implementation and commercialization of the network excess capacity”.

The recommendations, delivered on April 15 – a day after Boko Haram militants detonated a bomb in Nyanya near Abuja, killing at least 75 people – were rejected by Mr. Sambo, officials told PREMIUM TIMES.

The panel criticized the offer as not only a security risk but also unethical given that Openskys evidently has foreign partnership-a violation of the National Telecommunications and Industrial Policy; and second, that the police had already spent substantially on the NPSCS.

Should the government insist on accommodating Openskys on the 450Megahertz since the firm already obtained the rights for it since 2009, then it should be migrated to Band “L”, while the police retains Band “A”, the panel said.

That suggestion too, has been turned down by the Vice president who enjoys the support of the Secretary to the Government of the Federation, Anyim Pius Anyim, our sources say.

In an emailed response, he said the report was yet to be submitted to the plenary for discussions.

“… the report is yet to be submitted to the plenary and no position has been officially taken on the matter yet ,so I wonder how you came to the conclusion that the Vice President is opposed to any recommendation as regards to the 450 megahertz thank you for the inquiry,” he said.

The officials who spoke to PREMIUM TIMES said the plenary discussion, if ever held on the matter, would be a formality as the VP communicated his preference once the report was presented to him.

It remains unclear why the 450MegaHertz has drawn so much attention since a separate frequency could be assigned to Mr. Offor.

But operators point at the huge commercial potential of the frequency for internet and smartphone data transmission- communications needing very high frequencies.

For a start, the government and the firm understand that even where police retains the network, the force can barely exhaust its bandwidth.

A strategic option in that circumstance would be to commercialise the remaining bandwidth, a venture so promising the government slated it for generating revenue for the repayment of the $399 million loan obtained from China for the construction of the NPSCS in the first place.

The 4G LTE is said to be 10 times faster than the 3G currently used for Internet by some Nigerian telephone operators.