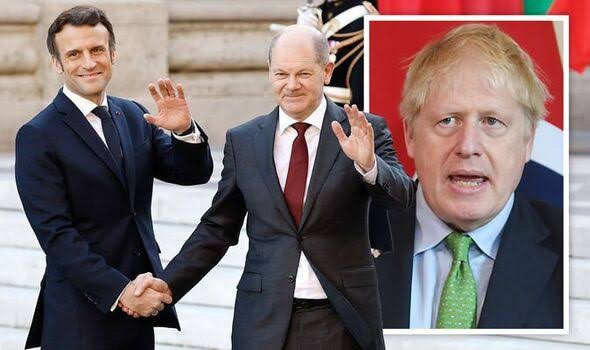 Former UK Prime Minister, Boris Johnson has claimed France was “in denial” about the prospect of a Russian invasion of Ukraine, while accusing the German government of initially favoring a quick Ukrainian military defeat over a long conflict.

In comments that are unlikely to be welcomed in European capitals, Johnson said that the attitudes of Western nations varied widely before Moscow launched its all-out invasion of Ukraine on February 24, singling out three leading EU countries

He said countries didn’t want to support Ukraine before the invasion unlike now.

Speaking to Richard Quest on CNN Portugal , he said;

“This thing was a huge shock … we could see the Russian battalion tactical groups amassing, but different countries had very different perspectives,”

“The German view was at one stage that if it were going to happen, which would be a disaster, then it would be better for the whole thing to be over quickly, and for Ukraine to fold,” Johnson claimed, citing “all sorts of sound economic reasons” for that approach.

“I couldn’t support that, I thought that was a disastrous way of looking at it. But I can understand why they thought and felt as they did,” Johnson went on.

Before the war Germany was heavily dependent on Russian gas, but since the invasion the nation has rapidly sought to reduce its reliance on Russian energy .

“Be in no doubt that the French were in denial right up until the last moment,” Johnson also said.