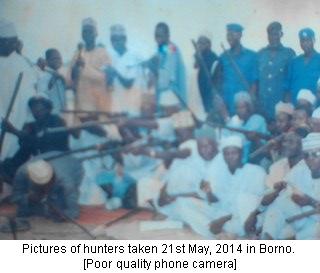 Associated press, AP publicized three days ago, that hundreds of hunters were beginning to lose patience, waiting for the governor and national security service to give them clearance to go after Boko Haram terrorists and on a mission to rescue the abducted girls. A head of the hunters group, told us that the hunters had been gathered there, requesting and awaiting government nod and support for well over a month now. ENDS conducted a phone interview from our Abuja office, with ‘Baa Malum,’ a representative of the Jiddari hunters in Borno; the full transcript is presented below. Along with the hunters, Nigeria’s Civilian-JTF (Civilian vigilantes) who have been at the forefront of the war against Boko Haram and have killed, captured and interrogated hundreds of terrorists, have for weeks been sending repeat requests to Nigeria’s leadership to give them the right to be meaningfully armed so they can go after the terrorists in the jungles (where they camp) the limited members of the Nigerian army are unable or unwilling to explore.

The Civilian-JTF have met with the hunters and both teams await approval for a joint, supported mission to ransack Nigeria’s forests for terrorists; however the approval does not seem to be coming any time soon. As it stands, the governor of Borno state, Kashim Shettima thus-far declined to give them the approval. In his latest request denial, governor Shettima reportedly sent an aide, Tuesday, to tell the hunters that he is unable to grant their request. He cited ‘the forests being explosive booby-trapped’ as his reason for denial; though this excuse is hardly believed or anything to go by. People wonder why governor Shettima will stand in the way of a true holy cause by virtually all standards and one which will protect Nigeria while defeating Boko Haram morally, mentally and physically and at last offer an ending for the four years of terror’s upper hand in Nigeria.

The hunters and Civilian-JTF are ready to make the ultimate sacrifice of their lives in this pursuit which many of them regard a holy struggle (Jihad), and believe as they stated that their Lord will protect them. The hunters know the forests like no on else and are confident in their physical and supernatural ability to give Boko Haram what they never anticipated. People are seriously questioning and wondering why the governor has been stopping these willing hunters and vigilantes (including committed youth from all over the country) from seeking out the terrorists who have continuously run a free flowing deadly insurrection and killed and destroyed thousands, in hundreds of farming villages in the state and across Nigeria’s north.

A vigilante we spoke to said, “why is it that it is bad people our leaders give gun to in Nigeria? Boko Haram are mere people like us… we know Sambisa, we will finish them. Boko Haram are always afraid of us. I am suspecting this governor, why is he refusing us and the hunters to pursue them?”

On May 8th, 2013, in an intelligence media report that we participated in drafting—the “Nigeria At War” report that advised the president of Nigeria to declare a state of emergency in the northeast—we clearly stated that a full state of emergency must be declared immediately and the Borno state governor, retired for the time being to allow actual and meaningful emergency rule. Maintaining a state civilian administrator with a parallel army command especially in this time of colossal war, creates a loophole for re-proportioning blame and permitted-failure to secure life. Nigeria’s President, Goodluck Jonathan, recognized as weak, refused to do the responsible and declared a half-boiled, partial state of emergency in what can be considered as failure to uphold his oath to the nation: as usual, he put politics before the people. Further suggesting a collaboration between the President and the state governor to continue permitting the eradication of all the state’s indigenous farming villages; rather than remove a governor who has for four years failed to manage to secure life in his domain, and failed to raise alarms and propose urgent motions in the best interest of his people (for whom he receives a Security vote) when and wherever due, the executive leadership has been allegedly toying with the idea of not holding elections in Borno state and recently, rather unbelievably, a proposition to extend the tenure of the Borno civilian administrator was pushed. This follows Nigeria’s administrative culture of executive impunity and reward rather than impeachment and punishment for failure.

Though a defined joint mission by the Borno state governor and the head of national security-President of Nigeria, to systematically allow and facilitate a Boko Haram wipe-out of the farming villages in Borno, cannot be empirically proven; there is mounting evidence that at the state and federal level, there is a mutualistic, deliberate complicity towards the destruction of the state, the farming villages and the nation’s food security, and at both levels there is conscious or administrative faux pas, advanced facilitation of Boko Haram and its activities against the farmers of the north and the nation’s food and life security as a whole.

The people of Borno are getting weary of their governor. Many are beginning to point fingers toward him, most especially seeing him as weak in the face the challenges the state faces at a time like this. The failures of the state governor which were recently compounded by his allegedly opening the Chibok school where the 276 girls were abducted, contravening state security regulations; are becoming too many for the people worst it by Boko Haram’s four years of terror,  to over look. Governor Shettima aroused global attention when he was reported to have said a few days ago: “Leadership calls for restraint. Believe me, if I should speak, heads will roll.” People wondered, quite uncomfortably, whether he is concealing the sponsors of terror, feeling their ‘heads’ are superior to the heads of the masses already rolling, or if as unconscionably, he was concealing information of top level security incompetence and sabotage that was behind the failure of the army to protect life. In both cases, they asked if this handful of elite government officials’ heads were more important than the lives (heads) of the thousands of farmers and traders that have been killed, orphaned, displaced and are still being killed in the hands of Boko Haram in their unending war against Nigeria’s poor, farming and trading masses.

ENDS’ conversation with ‘Baa Malum,’ of the hunters association of Jiddari in Maiduguri. Interview conducted by Ahmadu Awana through phone call from Abuja:

ENDS – Can you tell me your name please?

Baa : My name is Baa Malum. I am the secretary of the hunters union of Jiddari. I succeeded my father who was a renowned chief hunter during his time.

ENDS – Have you met with Governor Shettima?

Baa : Yes we have met the governor with our request to engage Boko Haram not just in Sambisa but anywhere we can find them.

ENDS – What exactly did he say?

Baa : The governor wasn’t straightforward when our elders presented our request to him. That we are tired of the happenings in our land; we want an end to this. Our people are dying… no one is safe. Our wives our daughters and anyone is not safe from these mad people.

ENDS – I just want you to say what the governor said to you people.

Baa : What the governor said was that the bushes are booby trapped with bombs and other traps that only the experts can go in and diffuse. That we will be risking our lives to enter the bush. We told him that we know our bushes for years and that there is nothing in that bush that is new for us. But he simply refused our request.

Now we are beginning to think that he is involved in the whole thing. Why else will he say no when we can bring this to an end. We have over six hundred hunters some in Kawuri waiting for approval but he used politics to say no. Some of us are feeling that he is protecting the government in Abuja .

ENDS – So you think the government has a hand in this?

Baa : Yes it’s the government of course how else can these boys get armored tanks? They have many. When we collected an armored tank at Kala Balge the governor said we should surrender it but we refused. We set it on fire because we are afraid if the government gets it, it will somehow end up with Boko Haram again.

From now on any time we collect things like this from Boko Haram, we will simply set it on fire.

ENDS –   Are you saying the government has a hand in this?

Baa : You know when you say you don’t know if the government is involved or not you annoy me too.

ENDS –  I’m sorry sir. But do you think you can face these boys without help where the army failed?

Baa : Yes we can we have done it before. Boko Haram knows very well we can defeat them.

Now we have declared war on them but the government is slowing us down.

Baa : We will ask for better weapons from the government … like the one the army is using. We want it for us and the Civilian-JTF too.

ENDS – You are saying the Civilian-JTF should be armed too?

ENDS – You know what I will do whit our conversation you know I said I am going to write it for the world to read?

Baa : Yes I know; with permission. We have our code of honor. Your grand father was a hunter so you know what mean.

ENDS – Yes I do thank you very much I will be expecting your call. Salam alaikum.