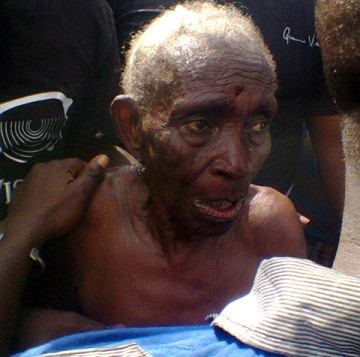 Residents of Ajegunle area of Lagos were, yesterday, thrown into shock, after a bird was said to have transformed into an old woman who confessed to being a witch.

The dark-complexioned nonagenarian with tribal marks, who spoke in Yoruba, told a bewildered crowd that she was on her way back to Ibadan, Oyo State (as a bird) when she missed her track.

She was also said to have told the mammoth crowd that her mystical powers disappointed her because it was dawn.

Eye-witnesses said three black birds were seen at about 7am, flying side?by?side along Old Ojo Road.

Then, all of a sudden, one of them landed on a moving pick?up van owned by Eko Electricity Distribution Company.

An eye witness who identified himself simply as Mr Okafor said: “Immediately the bird landed on the van, it transformed into an old woman.

“Everyone ran away at first but we later gathered round the woman only to discover that she had a bruise on her forehead with which she landed.

“When we asked her what her mission was, she said three of them were sent to Lagos from their coven in Ibadan but that on their way back, they missed their way.

“She said they started hovering in the area until it was morning, adding that she fell because she was tired.

“She also told us that she initially did not want to embark on the journey and that she used to restrict her witchcraft activities to Ibadan because of her age.

“She was thereafter taken to the Baale of Ajeromi, where she confessed to have killed her husband through witchcraft.”

Policemen from Layeni Police Division were said to have been contacted to prevent the woman from being lynched and they came and took her away.

Police sources told Vanguard that the woman would be released to any of her relations who shows up, explaining that the law does not recognise witchcraft.

“She has not committed any crime and will, therefore, be released to any member of her family who shows up. We did not arrest her. We only prevented a likely jungle justice,” the police source said.