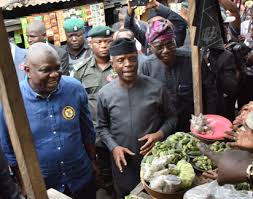 President Muhammadu Buhari has slashed allocation to a key social intervention scheme of his administration, the Social Investment Programmes (SIPs), by a massive 94 per cent.

While the programme received N500 billion in each of the previous three budget cycles, it got only a paltry N30 billion in the 2020 budget proposal Mr Buhari presented to the National Assembly on Tuesday.

The programme recently came under a controversy following its transfer from the office of the Vice President where it had been domiciled since its inception in 2016 to the newly created Ministry of Humanitarian Affairs, Disaster Management and Social Development.

The Special Adviser to the President on Social Investments in the Office Maryam Uwais, in May, disclosed that the National Social Investment Office (N-SIO), the coordinator of the NSIP, had received N470.825b in the three years out of the N1.5trillion budgeted for the poverty alleviation initiative.

She also said the NSIP had distributed $22.216m recovered Abacha loot to poor Nigerians under the programme’s cash transfer scheme.

It was not clear by Wednesday night why the administration made such a huge slash of the budget for a programme the President often speaks fondly about.

Mr Buhari during the Independence Day speech when he announced the movement of the NSIPs to the newly created Ministry of Social Development reiterated the administration’s commitment to the programmes.

”Our government remains committed to ensuring the equitable sharing of economic prosperity. Our focus on inclusive growth and shared prosperity underscores our keen interest in catering for the poor and most vulnerable.

”Accordingly, we are revamping and improving the implementation of the National Social Investment Programme through the newly created Ministry of Humanitarian Affairs, Disaster Management and Social Development.”

Presidential spokesperson, Femi Adesina, referred PREMIUM TIMES to the Ministry of Finance and Budget Planning for explanations on the matter.

But the minister, Zainab Ahmed, did not respond to several calls to her telephone line. The Director of Budget, Ben Akabueze, also did not answer or return multiple calls.

The president proposed a total fiscal allocation of N92 billion to the three in the 2020 budget.

The programmes and their allocations are the NEDC, N38 billion; SIPs, N30 billion; and the Niger Delta Affairs Ministry, N24 billion.

In the 2019 budget, the NEDC was allocated N45 billio﻿n, while the Niger Delta Ministry got N39.4billion.

Despite the slash, president Buhari said the NEDC 2020 budget proposal ”would fast-track the rebuilding efforts in the North East region.

”Furthermore, to fast-track the rebuilding efforts in the North East region, a provision of N37.83 billion has been made for the North East Development Commission,” the president said.

The NEDC has the responsibility to “receive and manage funds from allocation of the Federal Account international donors for the settlement, rehabilitation and reconstruction of roads, among other social amenities in the war-ravaged North-East states.” The states are Adamawa, Bauchi, Borno, Gombe, Taraba and Yobe.

Mr Buhari on Tuesday proposed a total expenditure of N10.33 trillion at the joint session of the two legislative chambers for the Federal Government in the 2020 budget.

Debt service is estimated at N2.45 trillion, and provision for a Sinking Fund to retire maturing bonds issued to local contractors is N296 billion.

While capital expenditures are monies spent on acquiring or maintaining fixed assets, such as land, buildings, and equipment, recurrent spending refers mainly to expenditure on operations, wages and salaries, purchases of goods and services, and current grants and subsidies.