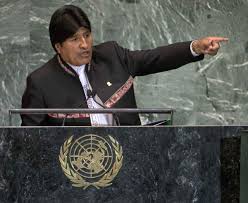 South American state of Bolivia on Wednesday declared Israel a terrorist state and renounced a visa exemption agreement with Israel that allows Israelis free travel to Bolivia since 1972.

The huge decision was announced by Bolivian President Evo Morales during a talk with of educators in Cochabamba.

Morales said that by revoking the travel treaty, it meant “in other words, we are declaring (Israel) a terrorist state,” further stating that “Israel is not a guarantor of the principles of respect for life and the elementary precepts of rights that govern the peaceful and harmonious coexistence of our international community.”

Over 1300 Palestinian civilians have been killed in the latest Israeli aggression on occupied Palestine.

The White House condemned Israel Wednesday for firing mortars at a UN shelter, killing over 20 Palestinians holing up inside.

Eva Morales last entered global headlines July last year after his presidential jet was detained for over 36 hours by the United States on suspicion that he was transporting NSA leaker, Edward Snowden. The Bolivian state subsequently offered Snowden asylum in the South American nation.

In related news, it is really unfortunate that there are increased reports of antisemitism in Europe. Jews and Jewish community buildings have been increasingly coming under attack in the last few weeks.

There is never any justification for this type of genocidal-thinking behavior towards people not directly involved in conflicts. The attacks on innocent Jews living in Europe is being condemned globally with Muslim, Christian, Jewish and all other groups clearly condemning these acts against innocent civilians as nonreligious, unconscionable and inhuman.