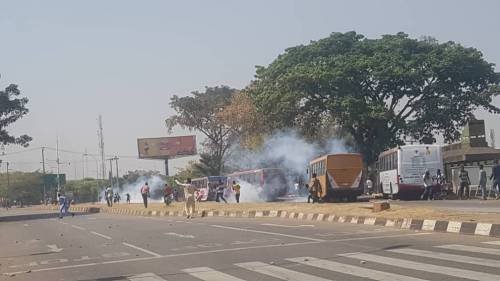 Policemen have fired gunshots at protesting members of the Islamic Movement in Nigeria in Abuja as members of the sect took to the streets in commemoration of four years of the Zaria massacre where many of their colleagues were allegedly killed by the Nigerian Army.

The protest, which kicked off from Wuse Market, was disrupted at Berger bus-stop when the armed policemen fired teargas and live ammunition to disperse the crowd.

The demonstrators retaliated in anger and pelted the policemen with stones.

Commercial activities have been grounded around the area as people scurried for safety.

Recall that the group had engaged in a bloody clash with the entourage of Chief of Army Staff, Tukur Buratai, in Zaria, Kaduna State, in 2015 leading to the death of many members of the sect and arrest of their leader, Ibraheem El-Zakzaky, who remains in detention together with his wife.