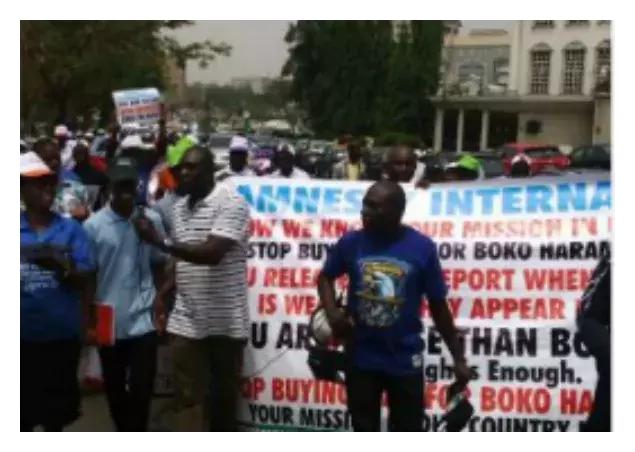 Vanguard reports that the Executive Director of the group, Comrade Melvin Ejeh, while addressing the protesters, said if in the next 24 hours Amnesty International does not shut down its operations in Nigeria and leave the country, the group as well as other Nigerians shall begin a Five-Day Occupy Amnesty International Protest as a first warning.

He said: “Let us warn at this point that there will be no interval of respite if AI fails to leave Nigeria at the end of the five days as we will activate other more profound options to make the organization leave Nigeria. We therefore use this opportunity to call on Nigerians to join the movement to get this evil out of our land before it plunges us into real war.”

According to Ejeh, well respected organizations including the National Human Rights Commission (NHRC) and the Global Amnesty Watch have condemned the recent report by amnesty international which alleged human rights abuses by Nigerian security agencies against arrested Boko Haram suspects.

He said the deliberate attempt by Amnesty International to indict the security agencies working day and night to restore peace in troubled parts of the country without condemning the heinous crimes committed by Boko Haram terrorists proves that the international organization has ulterior motives.

He said: “Previous calls by concerned groups for the government to kick Amnesty International out of Nigeria for the safety of citizens have gone unheeded.

Unfortunately, if this organization is allowed to continue carrying out its atrocities here, it will destabilize Nigeria.”

“Unlike our leaders, most of us do not have the resources to relocate our loved ones to other lands if Amnesty International succeeds in ruining this nation down. Like the victims of AI’s operation in the Middle-East, we would be left without a country and we would not be welcomed in other nations.

We will become mere footnotes in its next annual report since it stops showing interest in places it has successfully destroyed.”

Speaking further, he said recent revelation by Haaretz, an Israeli newspaper, has indicated that Israel used Amnesty International as a front for its foreign ministry.

“The documents reveal how some heads of Amnesty International Israel were allegedly in regular contact with the Foreign Ministry from the late 1960s to the mid -1970s, reporting on their activities in real time, consulting with officials and taking instructions from them.”

“The Amnesty office in Israel received regular funds transferred through the Ministry of Foreign Affairs which reportedly included hundreds of Israeli pounds for flights abroad, per diem allowances, and registration fees and dues payments to the organization’s headquarters.”

He said though the Nigerian authorities might not be unaware of the evil machinations of this organization, but it may have opted to treat it with diplomatic considerations.

He however said that: “This in our consideration is not the right approach to dealing with this demonic entity. Its evil contaminates any country it chooses to work against. Its destructive touch leaves countries in failed state.