The truth of the matter is that there was no time that Sheikh Zakzaky was at the custody of the Nigerian police, since his detention he has been under the custody of the Department of State Services (The Nigerian secret police) that is led by a die-Wahhabi Mamman Daura, a relative of President Buhari.

Whoever is aware of the first coming of the Nigerian President as the military Head of State in 1984 will know the history of his notorious Gestapo-like secret police, the NSO, that abducted many Nigerians and some of them were tortured to death. Sheikh Zakzaky was their “guest” at the notorious Alagbor detention center in 1984 and was held there incommunicado for 6 months, he was subjected to server torture morning, afternoon and night.

Due to his wicked mindset and vengeful character President Buhari uses the Nigerian secret police to do and supervise his dirty jobs that the conventional police will not handle. After he ordered the inhuman Zaria slaughter of defenseless and unarmed Nigerians, he them brought in the DSS to “clear” what remained.

Attached to this post is a letter written by the DSS to the Head of the legal team representing Sheikh Zakzaky and the #IMN, Chief Femi Falana (SAN). From the letter we can see that the Nigerian regime via the DSS are unhappy of the independent path of the IMN legal team as they had wished that the legal team become willing actors to the post-massacre script that was written by the Nigerian regime and directed by it. 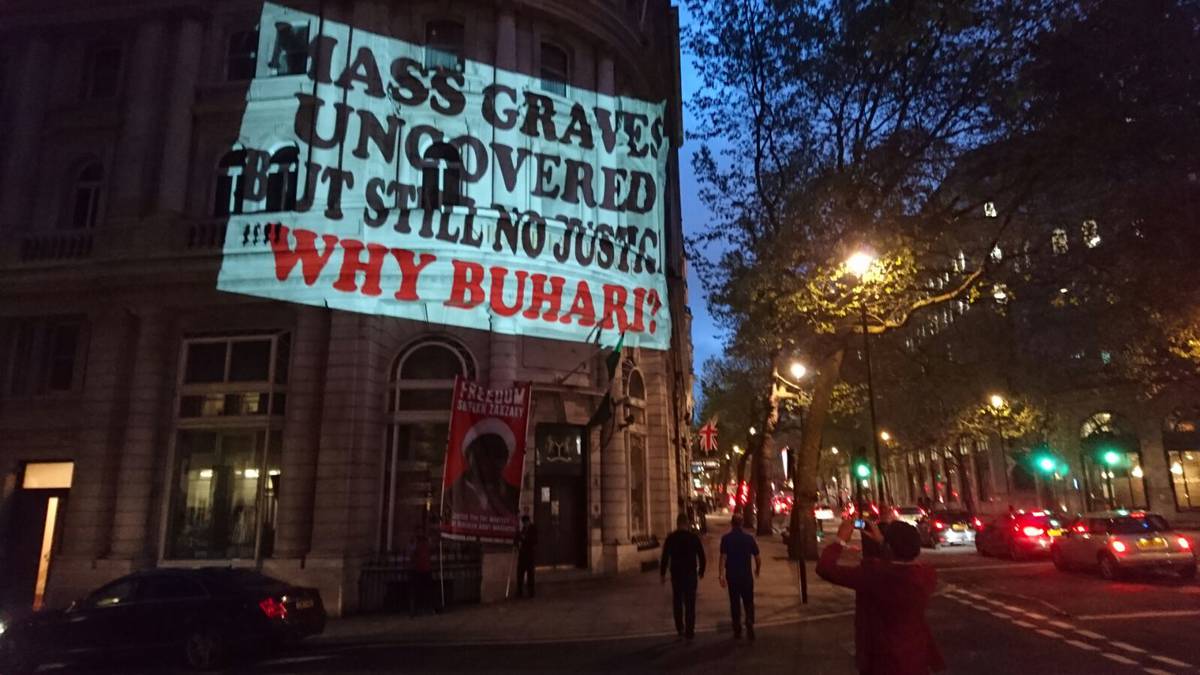 After the Nigerian regime brutally murdered close to 1000 peaceful Nigerian Shia Muslims and dumped their dead bodies in mass Graves to serve an evil imperialist agenda that has the savage Saudi regime as a front, the regime constituted a kangaroo Commission and populated it with die-hard bloodthirsty Wahhabis that have #ShiaGenicide as a global agenda. The IMN decided to boycott the kangaroo Commission and Sheikh Zakzaky latter certified that when his legal team where eventually allowed to have audience with him.

The DSS have since then being threatening Chief Femi Falana and other members of Sheikh Zakzaky legal team and preventing them free access to him despite the fact that they have two important cases coming up against the Nigerian government in Kaduna and Abuja Courts in weeks to come. The DSS is insisting that new Lawyers should be introduced as if the DSS that all Nigerians know are a tool of the Nigerian tyrant are the representatives of Sheikh Zakzaky!

On a final note, Sheikh Zakzaky and the IMN have no intention of changing their legal team and the Femi Falana-led team is doing a good job. Nigerians and the International community should ask the Nigerian President Buhari to call his DSS hunting dogs to order and to respect the laws of the land. The Nigerian Courts are there for all Nigerians to seek redress on any injustice and wrong done to them and the IMN legal team has decided to seek redress in Courts. 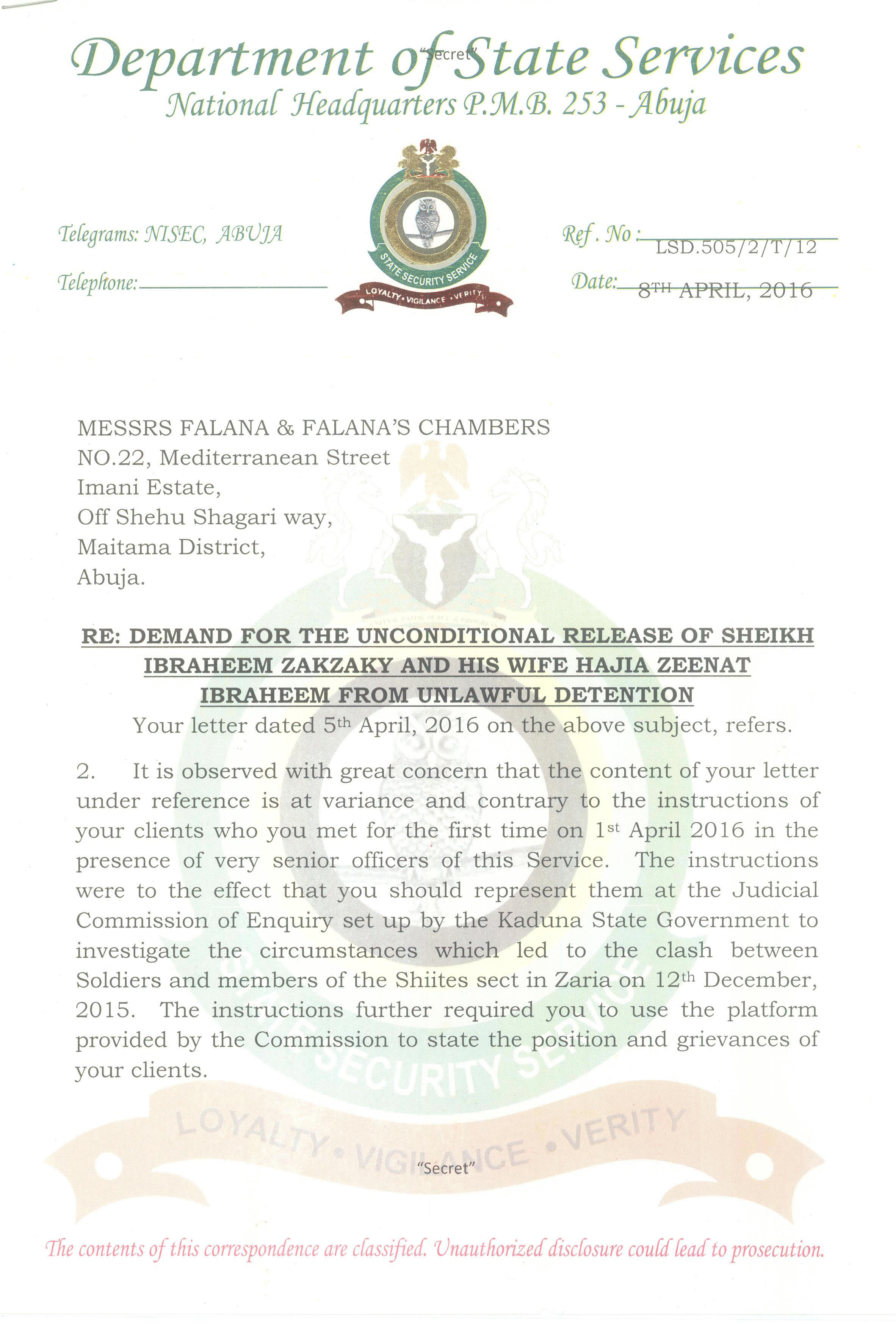 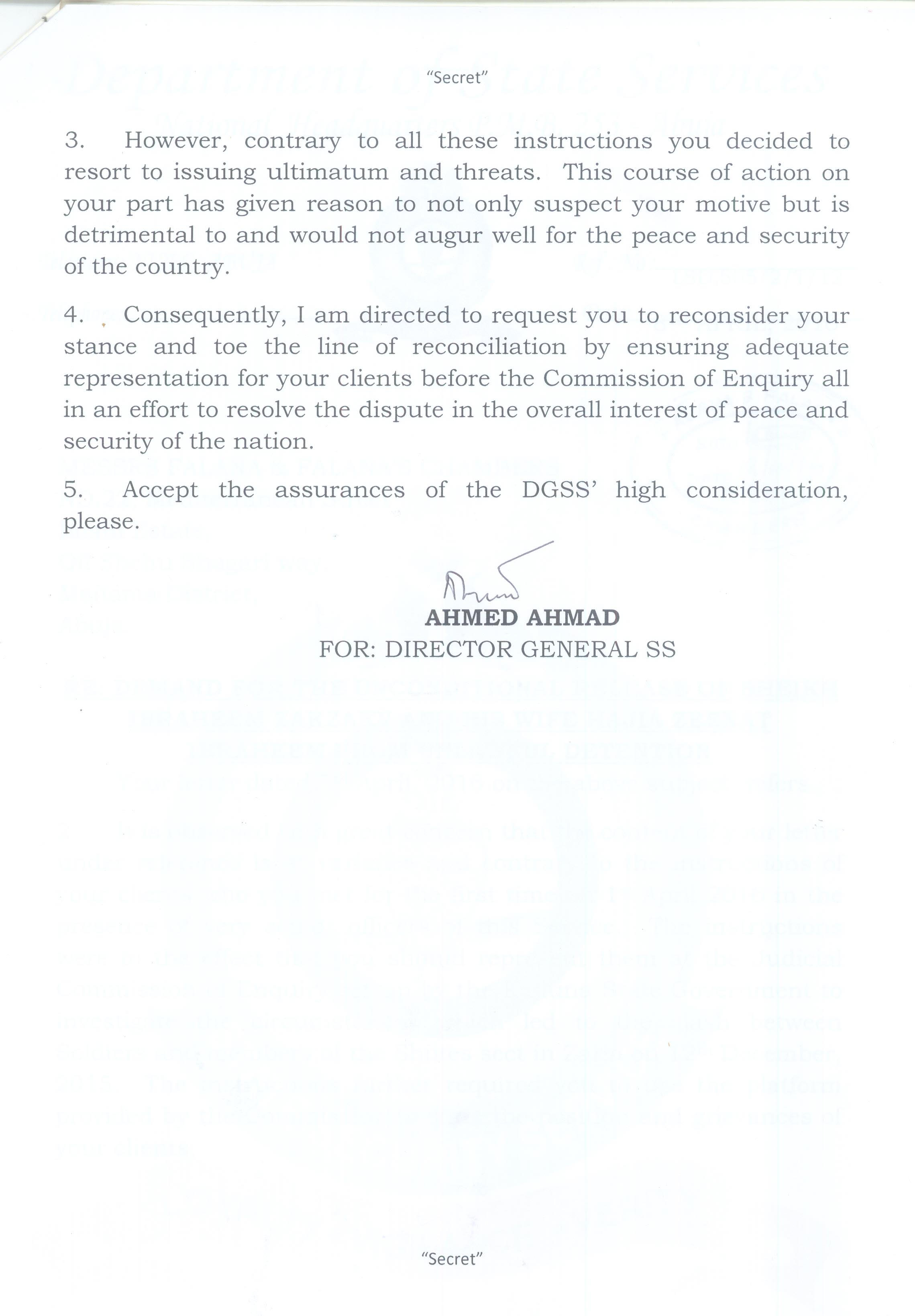