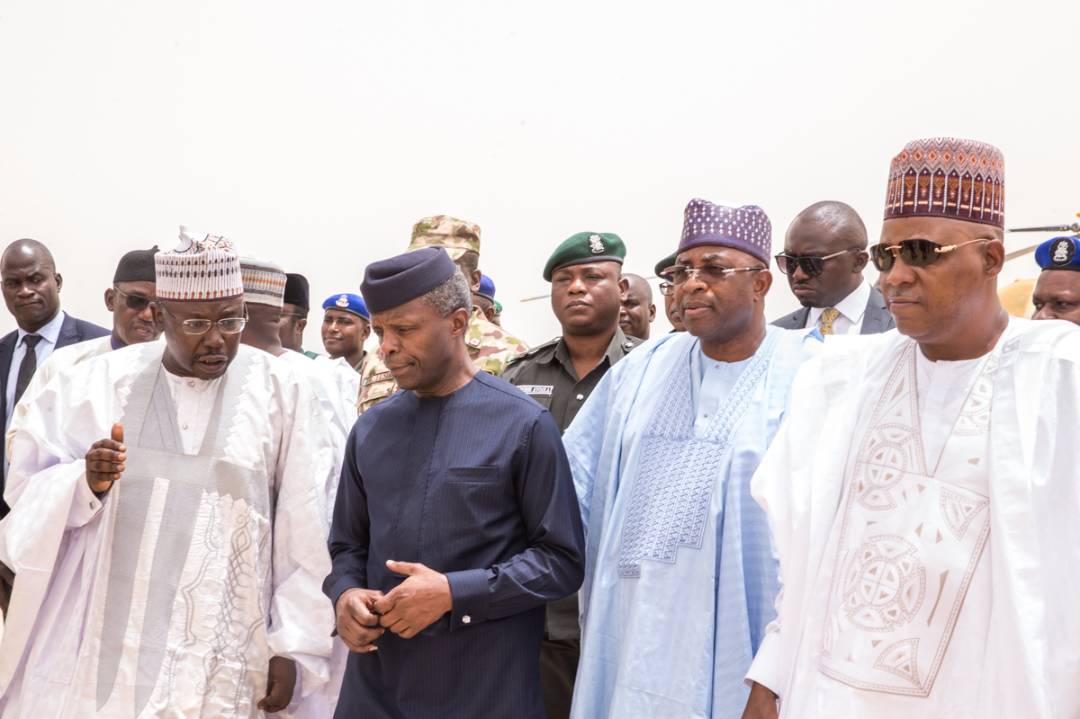 The Acting president inspected warehoused grains being distributed to displaced and vulnerable persons across the state.

5. One of the highlights of the new food distribution plan for IDPs is that it removes indignity of problematic queues 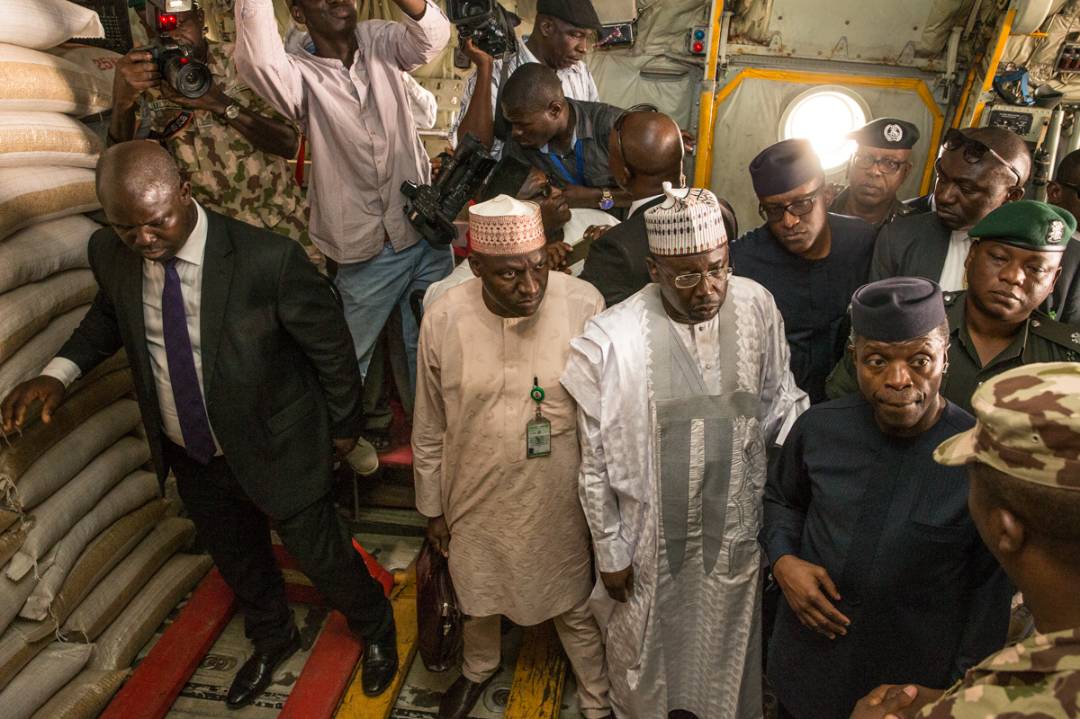 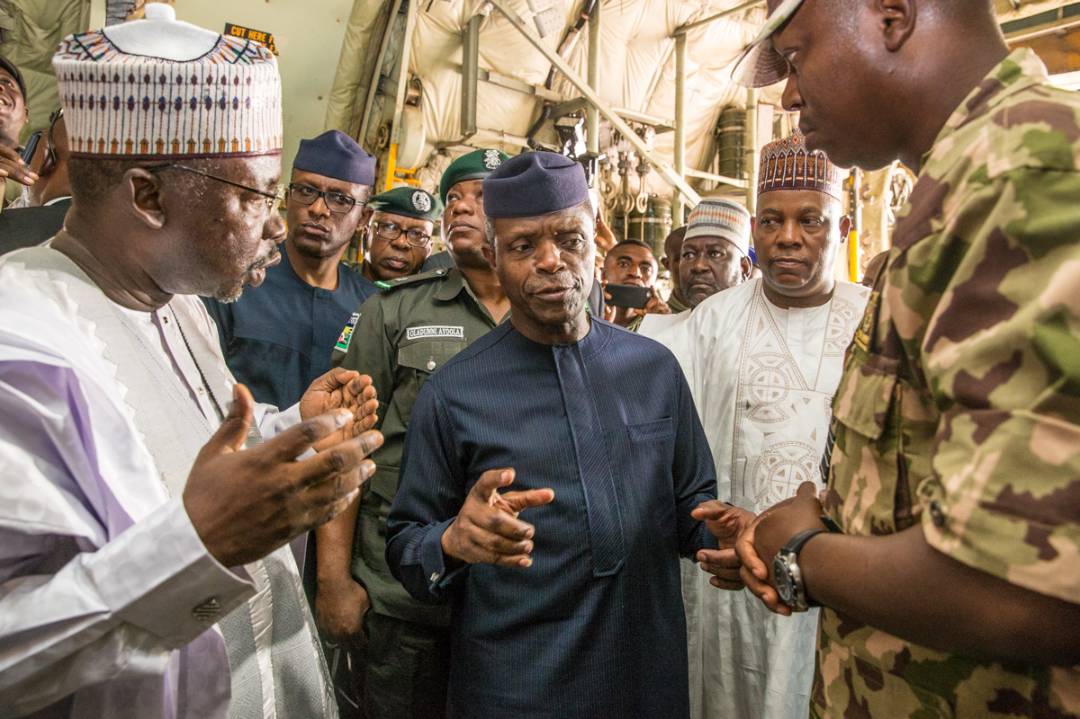 6. In his speech @ IDP camp Borno Gov says he had thought with attack yesterday, AgP’s trip today would be cancelled.

The attack reminisces the era of political Boko Haram where bombs go off in Maiduguri anytime former governor Sheriff visits to “scare him off.”

A former governor of Borno State, Ali Modu Sheriff, who has come under attack since Tuesday’s bomb blast in Maiduguri, has said the outlawed Boko Haram sect is not responsible for the blast.

Mr. Sheriff blamed Borno State government officials and members of his All Progressives Congress, APC, for the blast that is believed to have killed at least 31 people with dozens more injured.

The blast, carried out by a suicide bomber in a pick-up van, occurred at about 1:30 p.m. in the state capital.

Shortly after the incident, angry youth gathered in their hundreds and attacked persons and property linked to Mr. Sheriff. They blamed the ex-governor, who returned to the state over the weekend after a 11-month absence, for the attack. Several cars, and buildings, were damaged and burnt by the youth.

While the rampaging youth went wild, the ex-governor, who was billed to hold an inaugural All Progressives Congress, APC, meeting where interim party officials in the state would be inaugurated, shelved the meeting and left the city. He was accompanied by the state police commissioner and other top security chiefs in the state.

Likewise it appears possible that that the brazen attack yesterday was a ploy to thwart of the Acting president’s visit, which would mean that certain state officials in the know of the secretly planned visit inspired Boko Haram to make the attack.

It is known that elements in the north are unhappy with the vice president’s performance in acting capacity and would like him docile.

In highly sophisticated coordinated attacks yesterday, Boko Haram killed 17 people and injuring dozens, when they entered the city from two points. While the Jiddari Polo, Giwa barracks invasion was being engaged by the army, the terrorists also entered the city from its eastern axis, deploying several suicide bombers who would later blow themselves up at several Mosques during the Ramadan holy month 7pm fast breaking convergence.

Miaduguri residents narrating the attack told newsmen as contained in our earlier report that they had seen the Boko Haram terrorist formation at a village bordering Maiduguri and villagers fleeing the terrorists invasions earlier in the day had informed the army and security services but nothing was done.

A report was taken to the security about the Boko Haram gathering at about 3 p.m., but nothing was done to that effect”

“But it was about three hours later that we learnt that the gunmen had attacked some of the small villages and chased all residents away. Most of the displaced residents made it to Maiduguri on foot”.

Stating that those dislodged by Boko Haram in its earlier attacks who had run to the capital, told security men about the terrorists on their way, to no apparent avail. The attack of the capital started around 7pm.