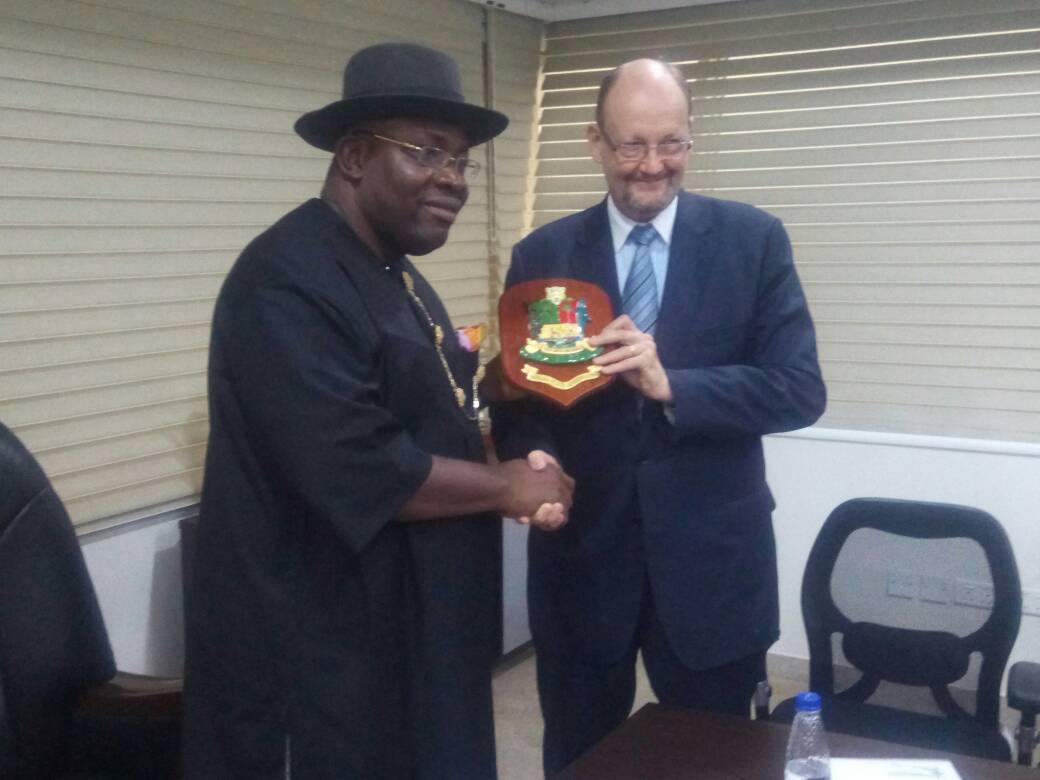 The European Union (EU), on Wednesday commended Governor Henry Seriake Dickson of Bayelsa State for his administration’s massive investment in health and education.

The commendation was also premised on his decision to ensure provision of an enabling environment for investors to do business.

EU Ambassador to Nigeria, Michel Arrion‎ gave the commendation when he paid a courtesy visit to Dickson at the Government House in Yenagoa.

Arrion who is on a three days visit to Bayelsa State said he was overwhelmed at the quality of schools and health institutions built by the government and expressed the EU’s desire to support Bayelsa in key sector of the state’s economy.

According to him, Bayelsa State has benefited from its programmes since 2008 through some of its development partners.

He stressed that the EU’s focus on going forward would, among others, be centred on technical and vocational education.

While maintaining that the EU’s interest will also be geared towards creating more jobs and boost the state’s economy, he urged the government to identify other areas of interest for investment.

The EU Ambassador ‎told his host that because of the historic ties and values between Africa and Europe, a lot of Europeans are eager to come and put their money and Bayelsa is one of the fancied destinations for them.

He said, “We have nine years of cooperation in Bayelsa and the state has benefited a lot from our development projects like health and water. Sometimes you don’t see us because we give money to UNICEF to implement the projects. We also give a substantial amount of money to the world bank and they are implementing SEEFOR but we will like to be more in Bayelsa State.

“We have seen what you are doing in education and we want to come in and take a key component of it which is technical and vocational education. One thing that brings investors is an enabling environment which‎ is here. So let us together look at areas we can work closely. There are a lot of possibilities and opportunities here.”

Arrion also extended an invitation to the governor to address a monthly meeting comprising the 21 European Ambassadors in Nigeria and other diplomats so as to further discuss about Bayelsa and the future plans for the state by the government.

The Governor, in his response, thanked the EU Ambassador for finding time to visit the state and for going round to see some projects of his government ‎also extended his hand of partnership to attract more investment in Bayelsa State.

Dickson decried the negative narrative about Bayelsa, saying every society has security challenge but there has been a shift because of his government’s‎ effort in that area and appeal to the diplomat to work on travel advisories to attract more investors to the state.

He said, “Bayelsa State is peaceful and secured. We are doing our utmost best in the area of security. Just because there are some incidents, does not mean the entire location is a no go area. People create a false alarm and that impedes our capacity to address issues of the economy.

“If you scare investors from coming, we will not be able to create jobs that will employ these young people who are out there creating some of these concerns. So the solution Ambassador is not to scare people away but to get them involved. So as you return to your base, please help us tell the Bayelsa story that the narrative out there is not correct and unfair.”

The governor equally used the meeting to inform the EU Ambassador of other‎ projects that his government is putting in place like the Industrial park and international airport that will further stimulate the economy and create lots of jobs.