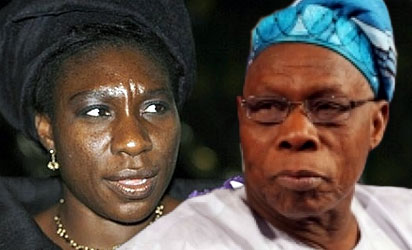 Iyabo Obasanjo-Bello, the first daughter of former President Olusegun Obasanjo has curiously kept mute over a letter she purportedly wrote her father, several hours after it was leaked to the media.

In the 11-page letter which was exclusively published by Vanguard newspapers, Ms. Obasanjo-Bello, a former senator reportedly made scathing remarks about her father’s official and private life. She described her father as a liar, abuser and hypocrite.

Repeated efforts by PREMIUM TIMES to speak with her on Wednesday to confirm if she actually wrote the controversial letter were unsuccessful.

This newspaper repeatedly called Ms. Obasanjo-Bello’s mobile telephone, sent her multiple e-mails, text messages and left voicemails on her telephone, but she did not respond to any of them.

Her continued silence has however cast a shadow of doubt about the claim by her family and some of the former president’s spokespersons that she did not write the letter.

This newspaper first sent her emails at 10.32 a.m. Nigerian time. We later obtained her U.S. telephone contact and called her multiple times beginning at 2.55 p.m. Nigerian time. She did not answer or return the calls.

We later send her a text message and left multiple voicemails for her. We got no response.

A member of the family who pleaded anonymity for fear of being harassed by security agencies had told this newspaper in a telephone interview on Wednesday morning that Ms. Obasanjo-Bello did not write the letter.

The family member, who claimed to have discussed the matter with Mr. Obasanjo, said the letter must have been forged because the former president spoke with his daughter two days ago.

Two other associates of the former president, Tunde Oladunjoye and Femi Fani-Kayode also denied that the former senator wrote the letter.

“I can tell you that such letter never existed. I can tell you authoritatively it only existed in the imagination of those who forged and published it. It is the height of desperation of those who masterminded it,” Mr. Oladunjoye, a former deputy governorship candidate of the Peoples Democratic Party, PDP, in Ogun State, told PREMIUM TIMES.

He also insisted Mr. Obasanjo did not receive such a letter from his daughter.

On his part, Mr. Fani-Kayode, a former Aviation Minister in the administration of Mr. Obasanjo, said based on his knowledge of the family, the former senator could not have authored the letter.

“I can tell you the so-called letter was forged by those in government, Mr. Fani-Kayode, a former Aviation Minister told PREMIUM TIMES in the morning.

“They think they can get Baba that way but they are mistaken. One thing is that if they want to fight Baba they should face him and leave his family out of it. Baba has spoken the truth and they should respond to the issues he raised.”

However, Mr. Fani-Kayode, in a text message he sent to this newspaper on Wednesday evening, urged Nigerians to stop bothering about the controversial letter .

“I don’t know what to believe about who wrote the letter to OBJ published by Vanguard Newspaper anymore,” he said.

“Let Iyabo Obasanjo talk because there are conflicting reports. I am more interested in the letter that Obasanjo wrote to Goodluck Jonathan and issues raised there than Obasanjo’s private matters.”

Senator Iyabo Obasanjo, daughter of former President Olusegun Obasanjo, is standing by her earth-shaking letter published this morning in Vanguard newspaper and reproduced by News Express as well as some other media.

“We have contrary information. We have spoken with her several times today and she’s standing by her letter. We have her on record, so it’s not a problem,” Vanguard Editor Mideno Bayagbon said when News Express called minutes ago to get his reaction to the news making the rounds that Iyabo has disowned the letter.

Asked what he made of the radio programme in which Iyabo reportedly denied writing the letter, the Vanguard Editor said: “I did not watch or listen to it, so I do not know who appeared on the programme.”

Bayagbon disclosed that that Vanguard has more on the issue, saying: “We are doing an update tomorrow.”

It would be recalled that in the 11-page explosive letter dated December 16, 2013, Senator Iyabo described retired Gen. Obasanjo as a liar, manipulator, and two-faced hypocrite determined to foist on President Goodluck Jonathan what no one would contemplate with him as president.

Senator Iyabo Obasanjo further accused her father of having an egoistic craving for power and living a life where only men of low esteem and intellect thrive.

She berated Obasanjo for orchestrating a third term for himself as president, cruelty to family members, abandonment of children and grandchildren, and also, a legendary reputation of maltreatment of women.

Iyabo told him pointblank that he does not own Nigeria and should stop deceiving himslef.