Wikileaks has released what may have been the final 2,073 Podesta emails in part 32 of its ongoing dump of hacked campaign chairman emails.

Dubbed #DNCLeak2, the fresh release contains some 8,263 previously unseen, hacked DNC emails with more dirt that many are saying will destroy CNN permanently.

In which the DNC writes the questions for a CNN interview with Trump. (h/t @tytuswilson) #PodestaEmails32 pic.twitter.com/QDeFjwPH0J

The latest dump has direct colusions between the Democratic National Convention and CNN, in preparing questions for CNN interviews of republican party candidate Donald Trump.

“Rigged without a doubt!”

In an April 2016 email from DNC research director Lauren Dillon, we find that CNN’s Wolf Blitzer had tasked the DNC with coming up with questions for his interview of Donald Trump:

Wolf Blitzer is interviewing Trump on Tues ahead of his foreign policy address on Wed.

Please send me thoughts by 10:30 AM tomorrow.

The DNC was quick to oblige, even if ultimately the interview ended up getting cancelled.

Also in April 2016, Dillon was tasked by CNN to come up with questions, only this time for Ted Cruz and Carly Fiorina: 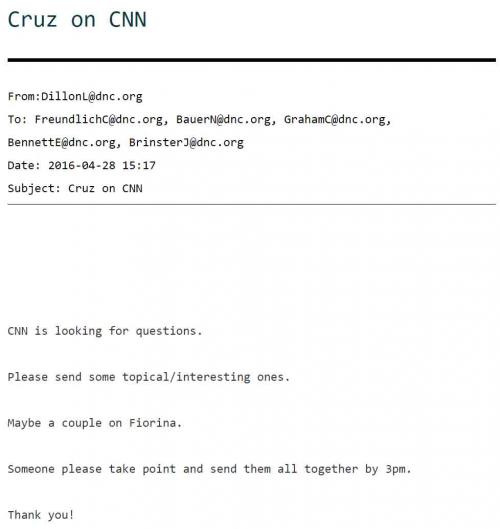 An email from May 2016, shows yet another instance of the DNC creating and approving a fake Craigslist ad seeking to mock Donald Trump.

Hillary couldn’t even bust 5.5K viewers on FB with LeBron in the house. She started coughing & had to suddenly end the Rally!#NeverHillary pic.twitter.com/e9PZIUab1U