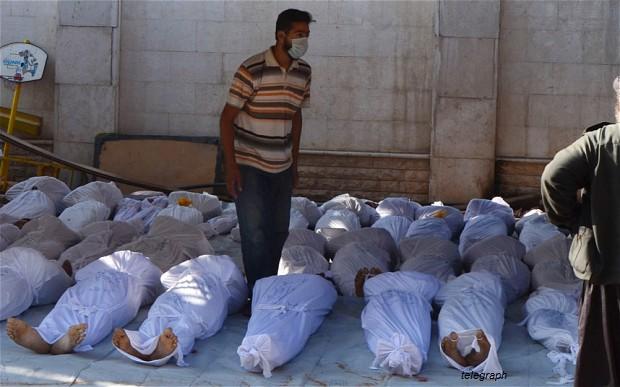 A British lawmaker says he believes the Israeli regime was the main culprit behind killing hundreds of civilians in Syria, because it provided terrorist groups affiliated with al-Qaeda with chemical weapons they used against civilians.

“If there’s been any use of nerve gas, it’s the rebels that used it…If there has been use of chemical weapons, it was Al Qaeda who used the chemical weapons”, said Respect Party MP for Bradford West, George Galloway.

Meanwhile, media reports had it that Qatar’s Al Jazeera TV and Reuters news agency published the news of massacre in East Ghouta, Damascus “one day” before the massacre happened.

According to the reports tens of videos were uploaded before foreign-backed terrorists announced and accused the Syrian government of conducting chemical attacks on its own people. Those evidences show the terrorists massacred people, including women and children, then recorded and uploaded the scenes to deceive the world’s public opinion, but they did so hurriedly and gave themselves up.

The question here is why the Syrian government and its army should have committed such a heinous mass murder using chemical weapons when the United Nations inspectors are visiting the country to investigate the use of such weapons?

The foreign-backed terrorists and mercenaries hired by certain regional Arab countries are making up those allegations against the popular government of President Bashar al Assad to invoke a foreign armed intervention in Syria the same as what they did in Libya.

Qatar’s Al Jazeera TV published the news of the alleged chemical weapons attack by the Syrian army, citing unknown activists as its source.

At the same time, one of the well-known pro- terrorists’ Youtube account ‘SHAMSNN’ swiftly uploaded tens of videos between 03: 00 and 04: 00 am, 20 August. The same people behind all these scenarios accused the government of Syria and its army of carrying out chemical attacks on 21 August.

Now, even if the chemical attacks had happened at 03:30 on 20 August, it’s not possible to film the scenes and upload tens of videos of these heinous crimes with the best quality pictures.

Therefore, all the evidence shows is that foreign-backed terrorists perpetrated the crimes, filmed and uploaded the scenes and went to their mouthpieces such as al Jazeera, al-Arabiya, Sky News and Reuters to accuse the Syrian government of a massacre the terrorists did.

Another best evidence of such brutality by the terrorists, who are regularly coming close to their end of life, is that they had gathered innocent civilians including women and children into certain places, killed them by nerve gas and filmed the brutal murder scenes, then they did what they were ordered to accuse the Syrian government.

Syrian Information Minister Omran al-Zoubi highlighted certain countries’ hostile stance towards his country telling the world that a media and political campaign of lies is being circulated by certain Arab and foreign media outlets including al-Jazeera, al-Arabiya, Sky News and others which are involved in the shedding of Syrian blood and supporting terrorism, with the objective of distracting the UN committee of inspectors of its mission to investigate which party to the conflict has used chemical weapons.

“The cries of terrorists and their calls for aid accompany the fact that the Armed Forces are advancing on the ground, and also accompany the fabricated campaign waged by some channels in desperate bid to imbue false morale in the armed terrorist groups,” he said.

Omran al-Zoubi described the support by some Arabs and the so-called Arab League for these allegations as ridiculous, naïve and illogical.