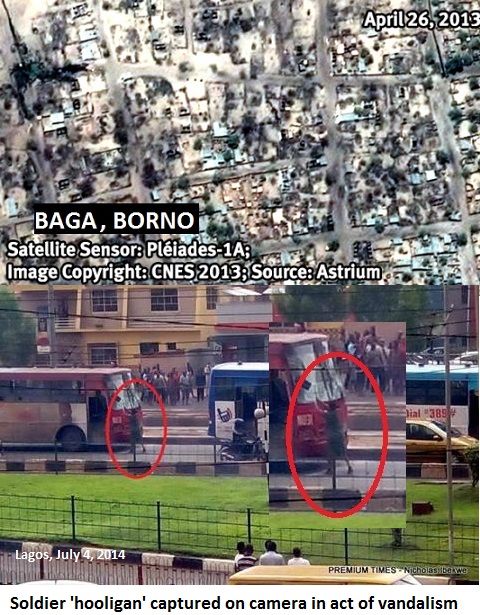 Five days after the very mad and unbelievably shameless acts of reckless, total devilment of several public transport buses in Lagos, by members of the Nigerian armed forces, the 81st Division released a statement of total denial.

The Deputy Director, Army Public Relations, Lieutenant Colonel Omale Ochagwuba in his publicly released denial, claimed that ‘hoodlums’ and not soldiers broke and burned the buses.

The denial of this veritable narrative by the army is a cause for serious concern. Does the army in its denial mean that the soldiers seen vandalizing the buses are hoodlums? With this denial, does this mean that those implicated will enjoy impunity for their acts of insolence, reckless endangerment and destruction of public property worth millions?

What does this blatant denial tell us, the people the army is here to defend, and what type of comfort does this give us in regards to all future matters of security under such authorized gun wielders? Is it this nature of people we give the right to bear arms and send to ‘defend’ our local outskirt communities?

If this denial of the truth stands, what kind of reassurance does this give us about our army’s engagement in the north east; what does it tell us about the burning down of Baga in April of 2013 for instance? In what type of hands are our citizens in the north conflict zones? What does this tell us about all the instances of claims of army excesses and army on army, civilian and civilian-JTF, terror in Borno?

Is it every time that the army is barbaric that hoodlums and terrorists are blamed? At times like this, one misses sage Fela who would certainly have released a track about hoodlums in camouflage.

No one is above error, misjudgment and reckless misadventure, however when an institution like the national army, fails to admit deadly blunders of its men, and rather than mete the appropriate punishment out to them, goes further in haste without responsible investigation, to attempt to cover up for treacherous atrocities, it puts the entire nation in a state of suspended discombobulation.

Alas, we have not heard from Abuja. With the current puerile running or better put, ruining of Nigeria, every single matter must be protested on the streets to get the attention of Abuja for simple justice and possible repudiation after national insult, stagnation and death has been delivered. And by the time it gets to Abuja, Abuja adds upon the insult. The ‘devil commandeered’ Interior Minister Abba Moro is still employed and not in jail, a reminder of our state of existence under a reign of terror.

When the BRT vandalism first occurred, Nigerians expected the entire Division responsible to be re-deployed to Borno. However, today we have been forced to take a different position. We cannot any longer trust these service men to wield weapons. We cannot be so callous as to send these lying schmuck to our isolated north eastern outskirt villages. These are the type of military men who aid and abet Boko Haam, who step back and allow Boko Haram stock-up on weapons from the nation’s armory; who receive money from Boko Haram and its federal sponsors to provide aerial support to the terrorists and assist the terrorists in bombing civilians and soldiers alike.

It was not just the buses that were broken and burned in this event, but our national faith and conscience as well.

We call on Abuja, to urgently address this newest matter of national pain and disgrace and immediately retire the offending officers and their lying commanders. Nigerians are very concerned about those in whose hands our guns are and our security is entrusted.