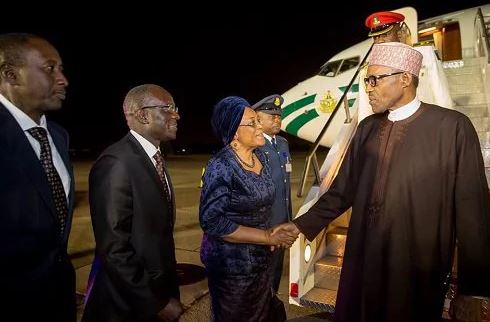 President Muhammadu Buhari has arrived New York for the UN General Assembly. He will be in the country till September 29th.

President Buhari’s commendably slim delegation list according to SaharaReporters includes: the Governors of Kaduna, Niger and Cross River states. Also on his entourage are former governors Rotimi Amaechi and Kayode Fayemi. The Senator from Katsina, Hadi Sirika and a former member of the House of Representatives, Abike Dabiri, are also in the group.

It would be recalled that in 2013, over 600 persons accompanied President Goodluck Jonathan to New York.   When SaharaReporters reported on the scandalous figure, Reuben Abati, who was then the spokesperson to President Jonathan, denied our story. However, in September 2014, Nigeria’s Minister of Foreign Affairs, Ambassador Bashir Wali, confirmed the story in a widely televised press conference.

So reckless and unaccountable had Nigeria’s participation become that SaharaReporters also found out in 2013 that the Minister of Petroleum Resources, Diezani Alison-Madueke, had taken luxury suites in two hotels: the Four Seasons, as well as the Pierre Hotel where President Jonathan lodged.  She and her delegation also rented eight luxury limousines that were parked in front of the Four Seasons throughout her stay, but only four of them were used.