“There is no crueler tyranny than that which is perpetuated under the shield of law and in the name of justice.” – Charles de Montesquieu

The first influential Nigerian personality to categorically condemn the murderous Boko Haram terrorism and unmask it as a tool of imperialism to kill innocent Nigerians and destroy cities and towns is His Eminence Sheikh Ibraheem Zakzaky. Sheikh Zakzaky made these disclosures about Boko Haram when most of the Nigerian elites were scared for their lives to condemn the heinous and murderous barbarism of Boko Haram.

Recently the Buhari administration claimed that it exchanged 82 Chibok Girls that were abducted 3 years ago with only 5 Boko Haram commanders. The question is why will one of the most deadliest terrorist group exchange 82 persons for just 5 of its own? I wrote on my Twitter handle that only the brainless fool will believe this recent lie of the Buhari administration.

Whatever money President Buhari gave Boko Haram will be use to buy weapons and arms to bomb and kill more innocent Nigerians and recruit suicide bombers.

President Buhari does not have a single achievement to show Nigerians and this is two years into his administration. Buhari paid Boko Haram huge sum of money in foreign currency for Chibok Girls to buy “achievement” for the May 29th Democracy Day speech.

The Nigerian Terrorism (Prevention) Act 2011 and Amendment Bill of 2012 with amendments to Section 17 states:

“Any person who does, attempts to do, threatens to do, promotes, assist or facilitates terrorism in any way or manner, or participates in terrorism financing, commits an offence and is liable on conviction to life imprisonment or to a fine of not less than N150 million or to both the term of imprisonment and the fine.”

Nigerians discovered that the released Chibok Girls are well fed and well taken care of than the millions of displaced Nigerians in IDPs camps. The released Chibok Girls do not look like captives in a terrorist camps. They look like well fed Nigerian elites. Oppressed Nigerians displaced by the Boko Haram insurgency in IDP camps are heap of skeletons. Buhari’s Grass Cutter gang are massively looting funds meant for the IDPs.

Statically, the number of peaceful Shia civilians killed by Nigerian Security Forces under order from President Buhari more than tripled the number of murderous Boko Haram terrorists killed between December 2015 to date.

It is important to note that the murderous Boko Haram terrorists are killing innocent Nigerians, abducting women and girls and destroying towns and cities but the Shiites have never killed a single Nigerian. The Shiites are victims of the Boko Haram insurgency with the Boko Haram leader threatening them in his videos.

Check this genocidal statistic of the brutal and inhuman Zaria Massacre by the evil, wicked and bloodthirsty mass murderer Nigerian tyrant Buhari:

* 39 families were completely wiped out!

Nigerians are asking this important question:”Why did President Buhari brutally slaughter 1000+ Shia children, women, the aged and men in Zaria in December 2015 and wickedly dumped their dead bodies in mass graves at night to bury the evidences?”

A foreign invading army will not commit the heinous crimes and atrocities Buhari’s army committed against Shia civilians in Zaria. Nigerians are asking “Why?” 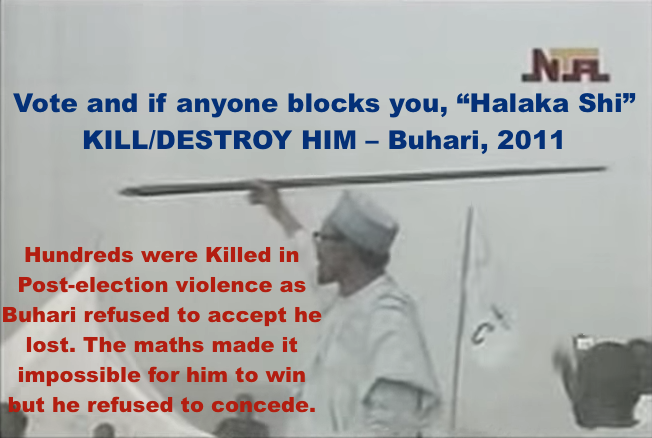 Oppressed Nigerians must understand that unity is strength & division is weakness. Unity of the oppressed is the greatest fear of oppressors. Nigerian oppressors are the most wicked and heartless in the world. They steal our money and take them to Banks of Western countries for safe keeping. Hunger, abject poverty & massive unemployment in Nigeria are not God-sent. They are the resultant evil of our wicked & heartless oppressors.