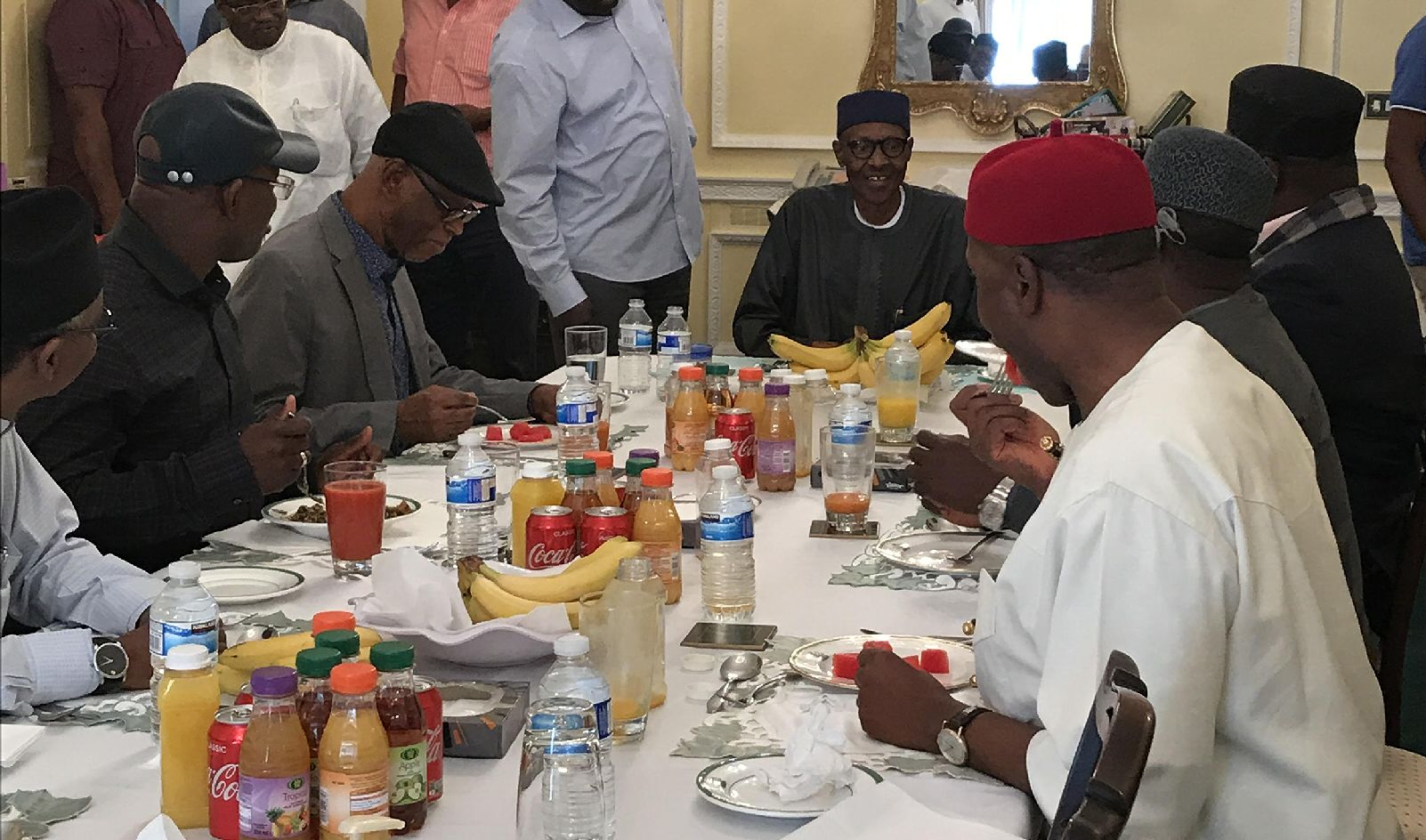 The picture of a handful of APC Governors and President Muhammadu Buhari, which was purportedly taken in London yesterday, is old and fake.

I have been reliably informed that they were taken during Ramadan in Abuja some time back and not yesterday in London.

Quite apart from that even though the picture was meant to have been taken in London curiously all the drinks on the table are Nigerian products and Nigerian-made.

Did the Governors take all those drinks along with them to London when they went to see the President? 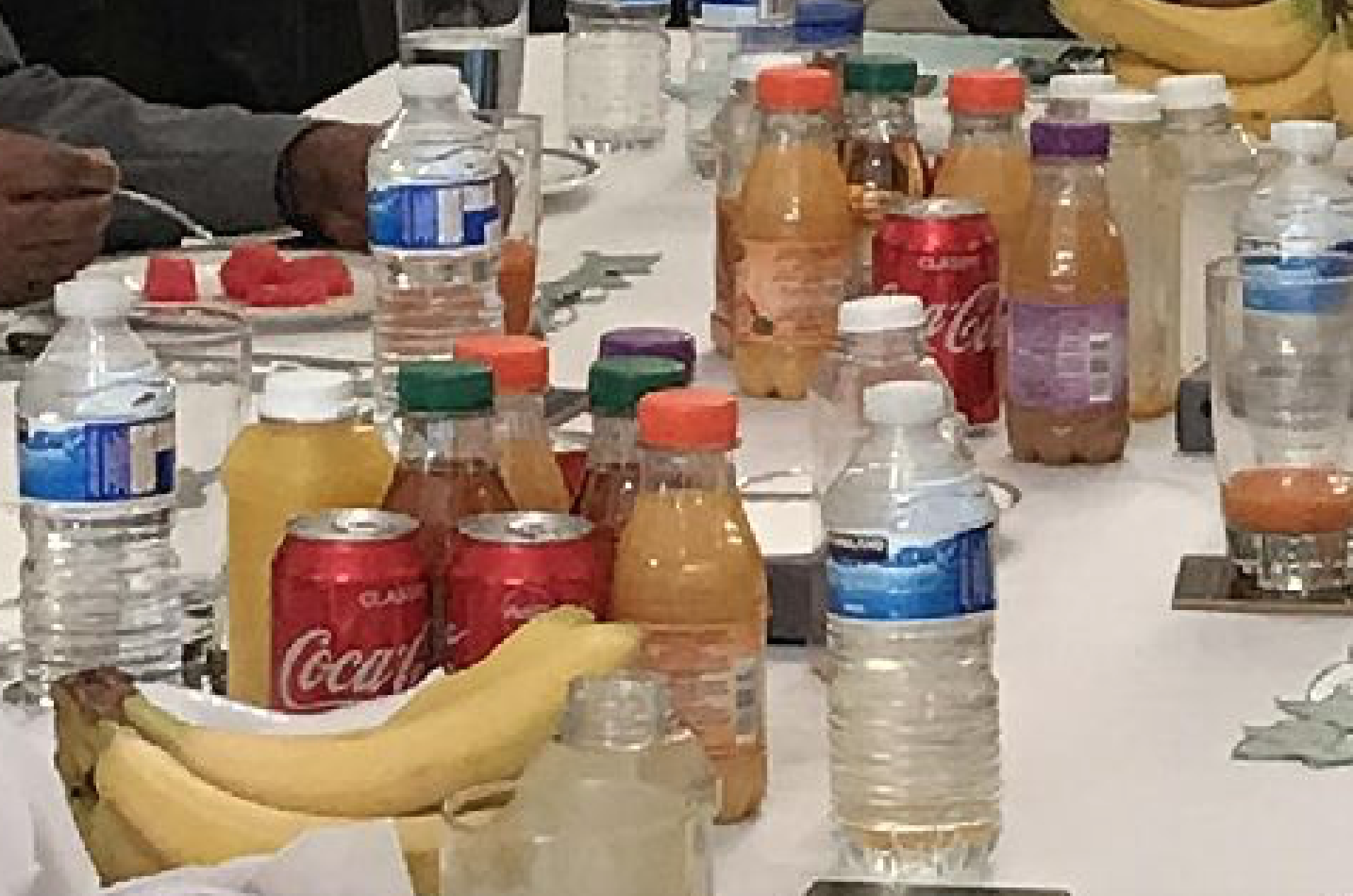 Is Buhari not coming home again anytime soon? Acting President Yemi Osinbajo and some government officials recently told us that he would be back on the 28th of July which is just a few days away.

Why the need for the APC Governors to “visit” him in far away London if he will be back in Nigeria in a few days?

Whatever the answers may be to these questions the curtain must be brought down on what can only be described as a puerile and nauseating conspiracy.

This crazy and noxious charade just has to stop. We do not wish the President dead but we have a right to know the truth. As a matter of fact we demand to know that truth because, as he once said himself, he “belongs to us all”.

For those who still believe that the meeting actually took place there are some nagging questions that need to be answered.

For example why were the Nigerian and foreign media not allowed to cover the proceedings and participate in this celebrated photo-soot and merry London feast?

Why did the Villa press corps not take one of their own camera men to London and make a short video of this “historic” event?

Why was were the whole proceedings shrouded in so much secrecy? Why is it that only one picture was taken? Why were more pictures not shot? Why was Buhari not put on audio tape and interviewed whilst he was with his celebrated and important guests?

Why did he not offer a few words of hope and encouragement to the Nigerian people to ease the tension that has been generated in the land by his prolonged absence?

How can they expect us to take Governor Rochas Okorocha’s word for anything without any solid proof or evidence to back those words up or give them a measure of veracity or credibility?

I for one would not believe a word that a man like Rochas tells me. If he told me that it was day outside I would have to assume that it was night. It is that bad.

Again why did Buhari not shake anyone’s hands during the photo-shoot? Why did he not get up from his chair, say “cheese” and give us a big Daura smile?

Why was he just sitting there. Why all the tall tales that he is getting much better

Is it not clear that even if he were to be brought back to Nigeria tomorrow he could no longer function properly and lead the nation?
Where is the shame in admitting these truths and prevailing on him to resign in order for him to be able to go home to Daura and take care of his health?

Better still he could resign and be taken to Prophet T.B. Joshua’s Synagogue Church Of All Nations (SCOAN) in Lagos for prayer, deliverance and healing. I assure you that it works.

Those who truly love Mr. President and care for him ought to advise him to take one of these two options. Yet sadly few will do so.

The bitter truth is that we have become the laughing stock of the entire civilised world since this shameless charade began.

A nation of 180 million people whose President has gone missing and who have no idea where he is, what is wrong with him or what the prognosis for his condition is. The situation is shameful and bizarre.

Worse still we have a media that is so fawning in its attitude when it comes to the Federal Government and that is so easily intimidated that they simply refuse to ask the right questions about this matter or undertake to carry out the necessary investigations with a view to establishing the truth.

This is the greatest tragedy of all and it results in total impunity on the part of the government because the media is not prepared to keep them on their toes.

Yet it doesn’t stop there. We have a Senate with 109 distiguished and able Senators and a House of Representatives with over 300 honorable legislators and yet not one of them has the fortitude or guts to call for the resignation of this ailing man who is clearly no longer well enough to lead our nation.

The following questions must be answered: are the Nigerian people under a blinding and binding spell? Is this the unholy work of vodoo-merchants, witch-doctors and necromancers?

Have our people been bound up and charmed by these broom-loving APC wizards and witches?

The truth is that God is watching this charade and He is not mocked. No matter what anyone says or does His will shall be done, His counsel shall stand, His purpose shall be established and His name shall be glorified in this situation and in our nation.

Nigeria is too important, too big and too good to be subjected to such malevolent indignities and infantile rubbish.

She is too blessed and advanced a nation to be manipulated by a faceless little cabal of power-hungry, godless, self-seeking, evil, men.

We as a people deserve far better than that and we ought to demand much more. Buhari is not a King with divine rights and neither is he God.

He is a human being like you and I and, just like us, blood runs through his veins. He is not immortal and he is not infallible.

He is mortal and he is fallible. He is not indispensible. Like all human beings, he is dispensible. With or without him Nigeria shall go on and our nation shall survive.

In any case whether he comes back alive or not is not the point and neither is it the relevant question.

The relevant point and question is whether he can continue to function as President if and when he does come back and, based on the information at my disposal, it is very clear to me that he will not be able to do so.

The morbid obsession with retaining power at all costs which has afflicted those in the Presidency that Mrs. Aisha Buhari has graphically described as the “hyenas and jackals” in the body politic of our nation must cease forthwith.

Nigerians are gracious, kind, long-suffering, resilient, loving, patient and compassionate people who wish the best for their President but that does not mean that they should be taken for granted, taken for a ride or treated like fools. They are not children and they are not stupid.

It is time for this horrendous madness and hideous nightmare to stop!

It is time for Buhari’s seat to be declared vacant and it is time for Acting President Yemi Osinbajo to fully take over and be sworn in as the new and substantive President of the Federal Republic of Nigeria.