In a clear indication that President Muhammadu Buhari’s return earlier today from London was premature and motivated by political pressure from some of his closest associates, Presidency and medical sources have told Saharareporters that the ailing Nigerian leader is set to return to the United Kingdom in three weeks to continue treatment for an undisclosed illness.

Saharareporters had consistently disclosed that members of Mr. Buhari’s medical team in the UK had advised against his return to Nigeria at this time, adding that some members of his political circle, afraid that their influence was about to slip, pressured the frail and still ill president to return to Nigeria in order to quell anxiety that he was too gravely ill to continue in office.

‘Early this morning, a presidential jet carrying Mr. Buhari landed at the Kaduna Airport in the capital of Kaduna State. The terribly emaciated and fatigued Nigerian leader was then flown in a helicopter to Abuja.

In a short address to Nigerians, President Buhari with a shaky voice expressed gratitude to “Muslims and Christians alike who have prayed and have continued to pray for my good health.” He described the collective prayers as “a testimony that, in spite of the hardship being experienced, Nigerians support the government in its effort to tackle our country’s challenges.” He claimed that his health had significantly improved during his prolonged treatment in London. 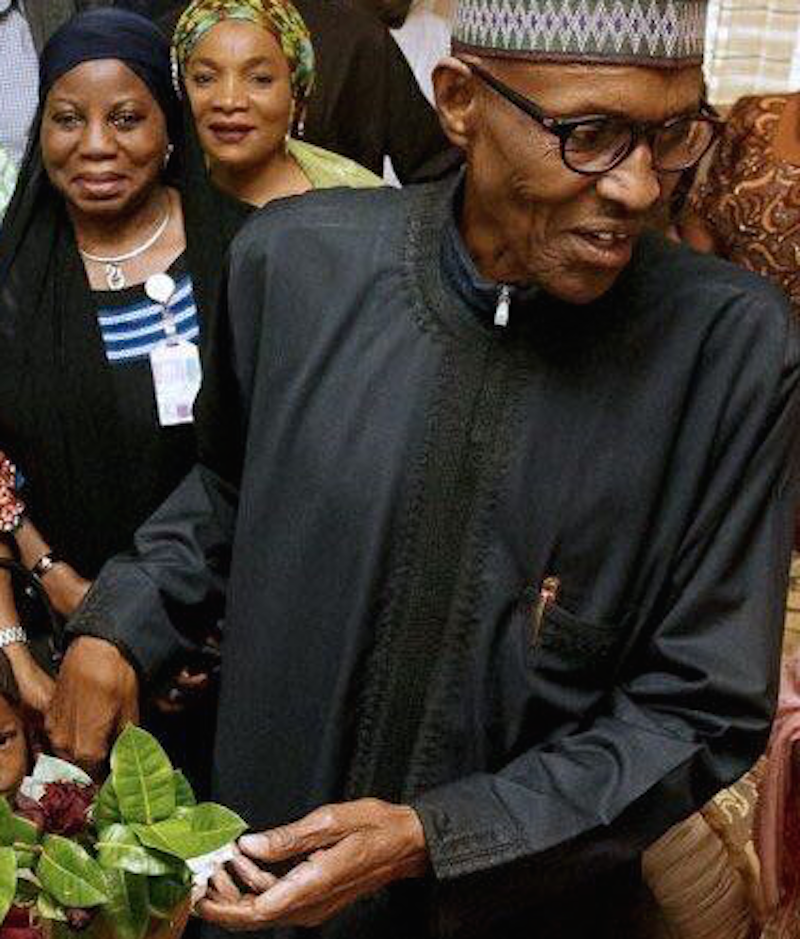 President Buhari had been flown out of Nigeria on January 19, 2017, in what his handlers billed as a 10-day vacation to rest. However, he ended up staying in London for close to two months, during which several political leaders went on pilgrimage to London to see him. The political visits often led to claims that Mr. Buhari was “hale and hearty,” and was merely resting some more before returning to assume the presidency.

In his speech to Nigerians, Mr. Buhari stated that the best way to repay for their good wishes was “to rededicate myself to serving you, protecting your interest and keeping your trust.”

Even so, the president’s address hinted at his unresolved health crisis. “I am feeling much better now,” he said before adding, “There may, however, be need for further follow up within some weeks.”

President only hinted of the gravity of his illness when he admitted he had never been this “sick” his entire life and then revealing that he had “blood transfusion.”

Our sources said Mr. Buhari plans to return to the UK within the next three weeks for further therapy. Two of the sources said it took intense pressure from his associates before Mr. Buhari agreed to return to Nigeria in defiance of his doctors’ opposition. The sources disclosed that the president finally succumbed to the wishes of his inner circle that he should leave the UK late yesterday, adding that the schedule left little room for preparation. Mr. Buhari’s presidential jet took off from Stansted Airport in London shortly after 1 a.m.

his plane touched ground in Kaduna at 7:41 a.m., sparking jubilation among members of his circle in Abuja.

After a short airport ceremony, during which a weary-looking Mr. Buhari greeted Kaduna State officials, the president boarded a presidential helicopter that took him to Abuja where a delegation led by the Vice President received him. He later met briefly with some governors and members of his staff to thank them.

In his remark, Vice President Yemi Osinbajo said Nigerians and the Federal Executive Council were satisfied to receive the President back in the country “hale and hearty.” According to the vice president, “It is a day of joy not only for us but for the whole country, Africa and the world. Your arrival has vindicated our position that you will return safely.”

Mr. Osinbajo also thanked President Buhari for respecting the constitution by entrusting power to him before commencing his trip to the UK, adding that he had a tough job “going around in borrowed robes.”

Our sources said that, given Mr. Buhari’s feeble health, the president was bound to maintain a highly light schedule with few, if any, public engagements before returning to the UK in a few weeks to continue his treatment.

Shortly after arrival ceremonies, the President retired to his residence asking VP Osinbajo to continue in an acting capacity as President while he continues resting and recuperating.

However, Presidential spokesperson, Femi Adesina quickly issued a clarification on social media stating that Buhari will transmit a letter to the Senate on Monday indicating his fitness to resume work.

Our sources had always maintained that Mr. Buhari’s doctors in the UK advised him to spend as much as four months in order to undergo the full regimen of treatment for his health crises, which include a prostrate condition as well as Crohn’s disease that had wreaked havoc on his appetite, leading to consistent weight loss.

One of our sources asserted that Mr. Buhari was due to undergo an intense phase of treatment starting from next week before his political associates persuaded him to postpone the treatment in order to return to Nigeria and shore up their waning political influence.

A statement released by presidential spokesman Femi Adesina noted that Governor Abdulaziz Yari of Zamfara State, who serves as the Chairman of Nigeria’s Governors Forum, the Minister of Information, Lai Mohammed, and the Chief of Defense Staff, Abayomi Gabriel Olonishakin, made remarks welcoming Mr. Buhari back to the country.