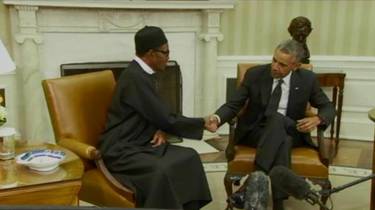 After four days in America on a first State visit, Nigeria’s new president, Muhammadu Buhari returned home half fulfilled. The vital loot recovery cooperation was on full thrust but not the quest for US arms. Just as Buhari had said no to homosexual privileges in Nigeria, so had Obama also said his no to selling Nigeria the arms it needs to fight terror.

Boko Haram trivializes 911. They’ve done at least ten 911s to Nigeria in the past 5 years and committed some of the worst abductions, mass rapes, decapitations and all types of barbaric violations in human history. This would call for ten Bush pronouncements of “you are either with us or with the terrorists.” Yet the US insists on not being with us.

In our publication ahead of Buhari’s US trip, we helped prepare the president and Nigerian minds for this predicted and predetermined refusal to support our war against Boko Haram. Obama’s posture wasn’t changing. Boko Haram, though the deadliest terror group in the world for two years straight, is our problem and no care of the US, yet. There will be no coalition; no UN resounding resolution, no reasonable financial aid, no arms and ammunition, heck, hopefully they won’t still continue to block us when we try to buy from others.

And the 1997 Leahy law has practically nothing to do with this. We all know the US is the greatest arms trader in the black-market around the world. And the one nation that always stands against UN Arms treaty resolutions against the illegal trade. The US Foreign Military Financing, FMF program, supplies arms (directly and through partners like Qatar and Israel) to the worst violators, most repressive and most tyrannical governments like Israel [the country that has perhaps the most human right and UN resolution violations in world history], Saudi Arabia, Libyan rebels – arms which are used by ISIS and Boko Haram today, “active conflict” embroiled nations like Uzbekistan, Chad, Colombia, Ethiopia, Pakistan and too many others to mention. When they block you it’s some more serious beef than the conduct of your military. When they bar you, they want you to open your nyash.

In departing remarks it was clear president Buhari was disappointed. He gave it straight at the United States Institute of Peace, USIP meeting, telling how the US had blood on its hands for declining to sell Nigeria weapons through the years on “uncertified accusations of military abuse” while watching thousands of Nigerians die.

“Regrettably, the blanket application of the Leahy Law by the United States on the grounds of unproven allegations of human rights violations leveled against our forces has denied us access to appropriate strategic weapons to prosecute the war against the insurgents. In the face of abduction of innocent school girls from their hostels, indiscriminate bombings of civilians in markets and places of worship, our forces have remained largely impotent. This is because they do not possess the appropriate weapons and technology which they could have had, had the so-called human rights violations not been an obstacle. Unwittingly, and I dare say, unintentionally, the application of the Leahy law amendment by the U. S. Government has aided and abetted the Boko Haram terrorist group in the prosecution of its extremist ideology and hate, the indiscriminate killings and maiming of civilians, in raping of women and girls, and in their other heinous crimes.” – Buhari, 22nd July, 2015; USIP.

That was strong; accusing the United States of inadvertently aiding and abetting Boko Haram terror.

But indeed it is true. The US does not care and we have racked our brains at why. Perhaps it’s because we are black.

In any case while we repair and rebuild our relationship with the US; hopefully Obama’s grouse not being things we can’t change…like our skin color or sexuality; as we said before Buhari’s trip, without further delay, president Buhari must consider other alternatives including looking inward.

And unlike Jonathan who only in his last minute realized that there is no reason a big and blessed country like Nigeria should in 2015 be begging for “mere pepper spray” as he put it, and that Nigeria should be manufacturing. Perhaps Buhari should use this blockade as an opportunity and propel Nigeria’s industrial revolution so we can become competitive as Iran became under the worst sanctions in history—and some day sit shoulder-to-shoulder with the United States as the Ayatollahs did in self respect and in the interest of mutual benefits.