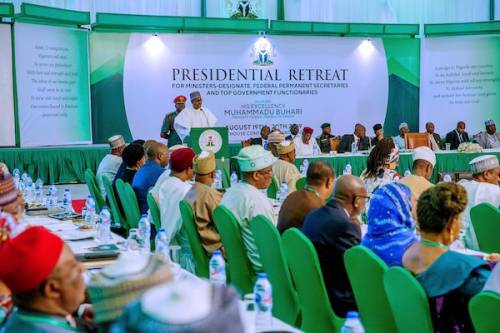 The Peoples Democratic Party has described President Muhammadu Buhari’s new cabinet as a team made up of persons “indicted for corruption and treasury looting”.

The party made its position known in a statement by National Publicity Secretary, Mr Kola Ologbodiyan.

Ologbodiyan said all 43 ministers are, “a poor parade of recycled foot-travelers”.

He added that, “The PDP is, however, not surprised that the President had no clear-cut blueprint to rescue the nation from the economic, security and social quagmires which his administration had plunged our nation into in the last four years.

“Of course, Mr President had on several occasions demonstrated a lack of required capacity to lead a nation as complex as Nigeria, especially at these trying times.

“At a ceremony where Nigerians had expected the forceful articulation of a progressive policy thrust, Mr President bored the nation with an empty and directionless script that only evoked more despondency in our nation.

“Instead of helping President Buhari to offer hope, his handlers were more interested on photo-ups and refreshments, away from serious business of governance.”

The party called on Nigerians not to lose hope in the face of abandonment by the Buhari led administration.