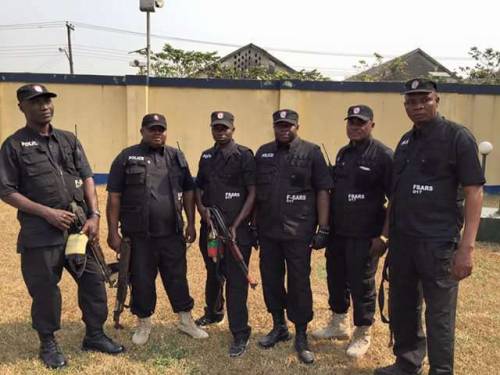 “Leave am, make I kill am,” a policeman said.

“God punish you! We no dey waste time,” one of the policemen added.

This is not a Nollywood movie scene but a video posted on the social media depicting how operatives of the Special Anti-Robbery Squad (SARS) shot dead two suspected phone thieves in Lagos.

In the video, two individuals were handcuffed and a voice (suspected to be that of the person filming the incident) said, “You go collect, you go collect.”

Then, a gunshot boomed.

The video also revealed a third individual arrested by the cops on the floor of a yellow minibus.

The three individuals were ordered to get out of the bus.

“Come down! Come down!” the policemen screamed and thereafter their victims were shot and killed.

One of the cops explained why their victims were subjected to extrajudicial killing, “They post on Jiji that they buy phones. Then, they will call you and price your phone at a higher price.

“After calling you, they will collect your phone at gunpoint. This happens at Igando. So, they collected my friend’s phone. My friend then changed his number on Jiji and posted another phone for sale.

“They called him again and he decided to go there with anti-robbery operatives to arrest them so that he could get his phone back.

“The anti-robbery team got there, caught them and shot them.”

Meanwhile, the Nigeria Police Force has yet to comment on the incident.