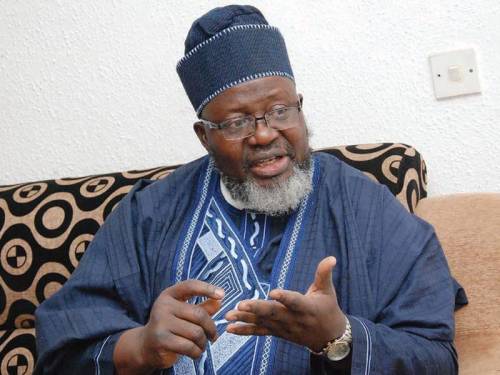 Victor Oluwadamilare, Special Assistant Media to Mr. Adebayo Shittu, Minister of Communications, has accused his boss of greed and wickedness. Mr. Olwuadamilare made the allegations in a letter to the minister. Dated 12 March and exclusively obtained by SaharaReporters, the former spokesperson’s letter said Mr. Adebayo owes him the sum of N13million in emoluments from November 2015 to the end of March 2018.

Despite Mr.  Shittu ’s refusal to pay, said Oluwadamilare, the minister has been living a lush life.

According to the spokesman, Mr. Shittu, within a space of 29 months in office, now owns no fewer than 12 luxury houses in Abuja, Lagos, and Ibadan. He also claimed that a few months ago, the minister bought a brand new N93 million printing press. Also, said Mr. Oluwadamilare, Mr. Shittu has bought over 25 luxury vehicles for himself, his family members, concubines, and cronies, despite having eight official vehicles attached to your office.

The aide equally stated that the minister has spent way beyond his legitimate earnings on his gubernatorial ambition in Oyo State, sponsored no fewer than 22 members of his family and cronies, including under-aged children, on Muslim pilgrimages in Saudi Arabia.

“Of course, everyone in Oyo State knows about your investments that run into hundreds of millions of naira in your less than three years in the office. These are currently scattered all over Oyo State,” said Mr. Oluwadamilare.

He equally stated that since Mr. Shittu’s inauguration as a minister, he has collected over N50 million in salaries, travel expenses running into several millions of naira and estacode more than $800,000.

The aide said he wrote to the minister on behalf of himself and his colleague, Mr. Tajudeen Imam, whom Mr. Shittu appointed Special Assistant (Special Duties) 25 months ago.

The Minister of Communication, Adebayo Shittu

Mr. Oluwadamilere said he was appointed as Special Assistant (Media) through a letter (HMC/026/Vol. 11/17), dated  November 23, 2015. The appointment letter stated that his “monthly emolument will be decided in line with the existing practice”.

Despite the appointment being properly documented, Mr. Oluwadamilare said the minister has refused to pay him. The refusal to pay, he added, necessitated verbal reminders after which the minister made promises to pay, but which were never kept.

“I was forced to mention the issue of non-payment of my emoluments to a number of your friends and close associates, who promised to talk to you on the imperative of paying the emoluments of your aides.  Indeed, I got several feedbacks on your promise to address the issue, but, after many months nothing happened,” he stated.

Before Mr. Shittu’s appointment as a minister said Mr. Oluwadamilare, he was planning to run for the governorship of Oyo State. In aid of the plan, Mr. Oluwadamilare said he set up a team of journalists under the name of Adebayo Shittu Media Office, using his own personal office at 36 Ososami Street, off Oke-Ado, Ibadan.

“I did not stop at that, I recruited and enlisted the support of seasoned journalists and experienced media managers, to coordinate and chart a media plan for your political ambition, ahead of your other competitors.  I was the Chairman and convener, for which I spent my personal resources.  Some of the members are Dele Ogunsola, Wale Adele, Bola Ogunlayi, Tawfiq Akinwale, Marouf Yusuf, Femi Popoola and Winlade Adisa,” he claimed.

Mr. Oluwadamilare said on account of Mr. Shittu’s unexpected nomination; the minister told him to liaise with members of the Adebayo Shittu Media Office to nominate one of them to be appointed as Special Assistant (Media).

The group held an emergency meeting, which ended with Mr. Oluwadamilare’s nomination.

He, therefore, wondered why, despite working conscientiously for the minister for over 27 months, he has not been paid “in line with the existing practice.”

He noted that the “existing practice” referred to in his letter of appointment and according to a subsisting Federal Government circular from the Office of the Secretary to the Government of the Federation (Ref. NO.SGF.12/5.6/1.1/23) to Ministers, Head of the Civil Service of the Federation and all Federal Permanent Secretaries, states that Special Assistants to Ministers should be on Grade Level 16 Step 4.  The letter also states other associated allowances.

“In summary, the total emoluments due to me as a duly appointed Special Assistant amounted to N252, 300. 41 per month.  This is inclusive of two Domestic Servants, who are expected to be on Level 3 step 8, according to a Consolidated Public Service Salary Structure (CONPSS), prepared by the National Salaries, Incomes and Wages Commission,” he said.

Mr. Shittu’s failure to pay him emoluments for over two years, he said, has not only made life very uncomfortable for him and his family, but has also made me a laughing stock among his professional colleagues.

Mr. Oluwadamilare said his health has deteriorated because he cannot afford to pay his medical bills and he has been a squatter in Abuja since 2016, having lived in a hotel for many months with outstanding debts till date.

“For close to one year now, there has been an unresolved feud with my wife because of my inability to effectively fulfill my marital responsibilities and family upkeep. My first daughter, from all indications, may not be able to enlist in the NYSC Scheme in April 2018 because of my failure to adequately fund her education. My second daughter had lost one calendar year in the university because of my inability to pay her school fees and other incidentals as at when due. My other children of school age, have been traumatized and discouraged in their educational pursuit because of the irregularity in the payment of their school fees, with its attendant backslash,” said Mr. Oluwadamilare.

He added that the non-payment of his emoluments has left him in debt to the tune of N3million.

“The hope of working with you to properly project you and Oyo State at the Federal Executive Council that came with nostalgic feelings has been dashed.  You did not only mess us up by dashing our hopes and aspirations, but you also inflicted on us injuries that are of permanent nature and of odious dimension.  You bruised our psyche, you rubbished our ego, you wasted our time, you exposed us to hardship, you almost destroyed our humanity, you reduced our worth before our wives, children, and acquaintances and above all, if not for God, you almost turned us to beggars in Abuja,” lamented the aide.

Mr. Oluwadamilare recalled that only two payments, linked to the minister, have been made to him. On 6 February 2018, he said, the sum of N500,000 was transferred to his Access Bank account under the name of Ademola Lawal. The same day, he added, another N500,000 was transferred to the same account one Sa’adu A. Sadiq and Sons. He noted that he has only been paid a total of N1million out of my accumulated emoluments, leaving a balance of N13million at the rate of N500,000 per month.

“To all intents and purposes, my demand for N500,000 monthly payments may seem incongruent to the provisions of the Consolidated Public Service Salary Structure (CONPSS) and the Federal Government Circular, but it subsists when one considers the following: Your body language and subsequent reactions showed that you have a clandestine motive to deny us our entitlements, the letter written to me by your former Special Assistant (Admin), Mr .David A. Awotunde, titled:  Payment of Monthly Emolument to Honourable Minister’s Aides and dated 10th June, 2016 is quite instructive,” said Mr. Oluwadamilare

He said he disregarded the letter because of its inconsistencies. He explained that the letter indicated that he was entitled to N100,000 monthly. Mr. Oluwadamilare said he has kept quiet for long and now, he is ready to do everything to get his emoluments.

“While you have been living in sudden and extremely outrageous opulence as a public servant at the expense of your dutiful and hardworking aides, you seemingly forget your pitiable socio-economic status and experience in Oyo State before you got this job, as you have all of a sudden become insulated to common sense, justice and fairness, the mantra on which many people sheepishly believed in you in your struggling days–including myself.

It is quite bewildering that the fact that you collect your salary every month and regularly does not strike any right cord in you that your aides too deserve a better life by way of their own legitimate emoluments,” said the aide.