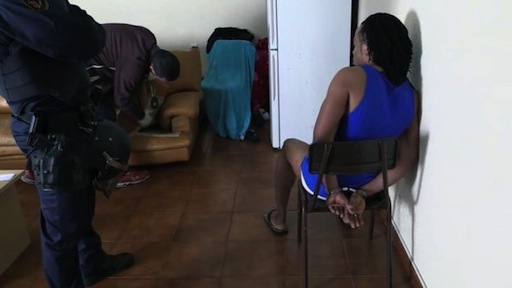 Catalan Police have busted a sex-trafficking group in Spain known as the Supreme Eiye Confraternity (SEC), or the Air Lords following a raid on their residential building.

BBC’s Sam Piranty was given access by the Catalan police, Mossos D’Esquadra, to an investigation into a Nigerian sex-trafficking gang. He spoke to traffickers and women rescued from sexual slavery before filming an early morning raid in November, which led to 23 arrests. He also discovered that the gang is now using London as a gateway into Europe.

Here’s Piranty’s report on the raid and activities of the group:

It’s 08:00 in the Catalan Police Headquarters on the outskirts of Barcelona and Xavi Cortes, head of the anti-trafficking unit, waits patiently for his 22 teams to confirm they are in position. Finally, he gives the order.

Two-hundred-and-fifty officers quietly climb out of their police vans. Single file, each team approaches a residential building watched by a few surprised neighbours.

On reaching the door, one of the masked police officers uses his fingers to count down. Three, two, one. The door is knocked down, the silence shattered, the officers rush inside.

The raid results in the arrest of the leaders of a Nigerian-based group running an international sex-trafficking ring in Barcelona.

It’s known as the Supreme Eiye Confraternity (SEC), or the Air Lords, and 23 people are now behind bars, with European Arrest Warrants issued for those who have left the country.

This operation was 18 months in the planning and involved monitoring more than a million phone calls, tapping dozens of mobile phones and months of surveillance.

Cortes and his team first came across the group in 2011 during a forgery investigation, but quickly discovered it was a huge network trafficking women and drugs.

He asks me to look at his screen. On it is a map detailing all the locations they have identified where members of the SEC operate. Cities are marked in Europe, North, West and East Africa, North and South America, the Middle East and Asia.

Eiye in Yoruba, the main language of south-western Nigeria means “bird”. The group’s insignia is an eagle and each city containing members is called a “nest”, with the “mother nest” in Ibadan, about 100km (60 miles) north-east of Lagos.

The group was started at the University of Ibadan in the 1970s, and the original intention was to make a positive contribution to society. Over time, however, many members went astray, committing violence in Nigeria and delving into crime abroad.

The group now traffics human beings and narcotics (cocaine and marijuana) and forges passports. It has also facilitated the transport of stolen crude oil into Europe.

“They are able to earn money in many ways, but we are focused on human-trafficking and the victims,” says Cortes.

His second-in-command, Alex Escola, then tells me something remarkable.

“You know, one of the tappings showed us that last year, on 7 July, around 400 members of SEC met in Geneva. They had a big meeting, all together.”

Xavi Cortes, Catalan police says Eiye Confraternity uses forged documents and passports from Nigeria to fly into places like Gatwick – these need co-operation of people working in the government

It was an audacious display of arrogance. In a city where many of the world’s global institutions are headquartered, including numerous UN agencies, a global criminal institution held its own parallel international gathering and no-one tried to stop it.

Benin City, Nigeria, is a human-trafficking hub, and a good place to observe how the criminal operation works.

After long negotiations, our team manages to speak to a recruiter, whose job it is to find girls. The recruiter explains that they either approach girls directly or through their families offering fake jobs abroad in a supermarket, or as a cleaner.

However, not everyone is tricked. Many women approach the recruiters themselves, often in full knowledge that they will be working as a prostitute in Europe. Some parents, also aware of this, approach recruiters on behalf of their children.

Destiny, who was 19 when she was trafficked to Spain three years ago, told me she knew sex would be involved but had never imagined she would be turned into a sex slave.

“If you live in Benin, there are many girls who came back from [Spain] with lots of money. They told us they had to have sex sometimes,” she says. “We are not stupid but I did not know I would be beaten and raped and have to have sex every night of the week.”

Day of the raid on the sex trafficking group
Photo: BBC

NGOs in Benin City say many of the recruiters now look outside the major cities in order to find girls who have not heard their warnings about the reality of life for trafficked women, or the stories of those like Destiny who have returned and are now alerting others to the dangers.

Once recruited, the girls are then taken to Lagos or to northern Nigeria where they are picked up by men known as “coyotes” or “trolleys”.

The journey to Europe is perilous. Wire taps reveal how coyotes transporting women were stopped by armed groups in the deserts of Niger or southern Libya demanding thousands of euros for them to pass.

“One phone call from a coyote to SEC showed how a coyote was saying, ‘I have a gun on my head and they want money,’” says Cortes.

A woman who was herself trafficked tells me about other horrors.

“The journey took weeks,” says Sarah, who arrived in Spain in 2013 at the age of 21. “One of the girls kept asking for water. The men did not like it so they threw her out in the desert in Libya. They left her and we continued the journey. They told the boss on the phone that she was killed by terrorists. We were not human beings. We were animals.”

Once girls are trafficked across the desert, they are then taken to “keepers”, who often rape them before they cross to Europe.

“When we got to Libya they put us in a house,” says Sarah. “This is when I knew we would not be working in a supermarket. One man was taking care of us. He would have sex with us, rape us. Then I became pregnant.”

Women who insist they will not work as prostitutes are tied up in a position called “the crocodile”. Their hands tied to their feet, they are left for days with no food or water. Some are left to die as an example to others.

Keepers often get the women pregnant prior to making the crossing to Spain. With a child or pregnant, they stand a better chance of not being deported, and the men can use access to the child as a form of blackmail to keep the women under control.

Two years ago, at a time when the coyotes reported Libya had become too dangerous, recorded phone calls show that the girls were taken instead to Greece, via Yemen, Iran and Turkey. And today, as the Mediterranean becomes more difficult to cross – and the authorities try harder to detect traffickers – the SEC has begun to use airports in the UK more frequently.

Like many migrants, trafficked women are often taken across the Sahara Desert
Photo: BBC

“This is a more expensive option for the group,” Cortes tells me. “They use forged documents and passports from Nigeria to fly into places like Gatwick. The language is also easier for them. These documents are expensive though and need co-operation of people working in the government to get.”

One evening in Barcelona, I head out with the undercover surveillance team. At around 10pm, plain-clothes officers in an unmarked car drive me to Badalona on the edge of the city.

We are taken to a top-floor flat where police have spent hundreds of hours watching the house opposite. A light is on in the window and shadows move between the curtains, before someone appears on the balcony – a madame.

There are two ranks of madame. Lower-ranking madames prowl the streets – many on la Rambla, the main tourist strip in the centre of Barcelona – constantly texting and calling their girls to check on their whereabouts. Girls are told to earn about 500 euros (£370) a night to stay in the madame’s good books.

BBC’s Sam Piranty gives us an insight into the raid
Photo: BBC

But clients, mostly tourists, may pay as little as 20 euros (£15) for sex, so this is often impossible.

After a night’s work, girls return home and divide their earnings into three. One part goes to pay for the flat, the second to pay for food and the third goes to the SEC. If they are not earning enough or refuse to work, the madames may beat them.

Higher-ranking madames collect money from their subordinates to pass on to local SEC leaders known as ibakkas. Always men, the ibakkas run the whole operation. They facilitate payment through the hawala system – a form of money transfer based on trust and one that is difficult to trace.

Ibakkas make sure that if any of their girls step out of line, their families back home are threatened. Family members have been known to be abducted and “disappeared” when girls refuse to pay their madames.

One woman, Jessica, who was trafficked to Spain in 2009, says two of her daughters, now in their early 20s, left home in Benin to escape the gang. One is in Dubai, the other in Morocco waiting to cross to Spain.

But in escaping one group of traffickers, they have put themselves in the hands of another.

“In order to pay the debt, they will be prostitutes too,” says Jessica.

Tragically, this is not an isolated case.

It’s a few days after the raid and Cortes seems content. Back in the office, dressed in full uniform, he details the large quantities of phones, computers, fake passports and documents seized at the time of the arrests.

Despite that, there is a hint of frustration in his smile.

“The size of the network means those arrested will be replaced,” he says.

According to recent wire taps, one of the major European co-ordinators of the group is looking to restructure the gang. The ibakka, based in London, was trying to get his 95 other European counterparts together for a meeting.

This kind of organised crime cannot simply be tackled locally. Arresting madames and taking women off the streets merely increases the demand for more women from Nigeria. This is an organised crime group, run by men, operating across the world. This is a network which requires a global police response.

Culled from BBC by PMN