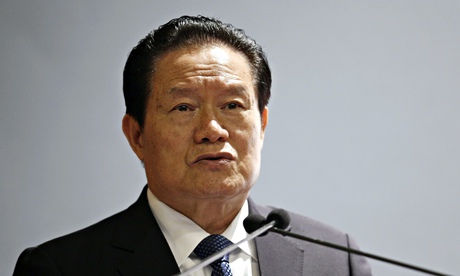 Zhou Yongkang has been under virtual house arrest since December. Photograph: Anindito Mukherjee/EPA

China is investigating former security chief Zhou Yongkang, it announced on Tuesday, in the highest-level corruption inquiry since the Communist party took power in 1949.

Zhou was one of the country’s most powerful leaders, overseeing a huge expansion in the domestic security apparatus before his retirement in 2012. The formal announcement of the investigation – widely known for months – is the most dramatic strike in President Xi Jinping’s anti-corruption campaign and underscores his growing power.

Xi has vowed to take down both lowly and high officials, or “flies” and “tigers”. Fittingly, the case against Zhou, the biggest beast yet, emerged on “international tiger day”.

The state news agency Xinhua said the 71-year-old was suspected of “serious disciplinary violations”. Its brief dispatch said the investigation would be conducted by the Communist party’s central commission for discipline inspection, adding that the decision was made in line with the party’s constitution and anti-corruption regulations. “It is an incredible precedent … The blade is out now,” said Kerry Brown, author of The New Emperors.

A commentary published on the website of the official People’s Daily, under a pen name, warned that ousting Zhou was not the end of the campaign. Unless corrupt people in high ranks were ousted, “we cannot keep the party’s purity and neither can we better rule the country.”

It added: “Zhou Yongkang is a big tiger. If we oust this big tiger, those corrupt people who have the illusion [of evading punishment] should understand that … however high ranking your behind-the-scene backers are, you will not escape the punishment of the party’s discipline and the country’s law.”

Zhou’s case breaks with the tacit agreement of recent years that the most senior figures should not be pursued, to maintain party unity. He is also the first former member of the politburo standing committee, China’s top political body, to be investigated over corruption.

He has not been seen in public since October and is thought to have been placed under effective house arrest not long afterwards. Scores of his aides, associates and family members had been rounded up, with many of the detentions announced publicly.

Zhang Ming, a well-known political scientist, wrote on his microblog account: “The noodle, which has been boiled for such a long time, is finally ready to be served … It’s a milestone event. The anti-corruption campaign has finally realized its vow of no off-limit targets. The fight will be getting more and more intense from now on.”

Earlier this month, Xinhua confirmed that the party was expelling Xu Caihou, the most senior military figure to be investigated for corruption under Communist party rule. He is a former vice-chairman of the central military commission.

Wang Yukai, a professor at the Beijing-based Chinese Academy of Governance said the timing of Tuesday’s announcement – before two important political meetings – was critical, showing the party leadership had a clear idea of the route map and timetable for the anti-corruption campaign.

He said the investigation of such a senior figure showed the leadership was unified against abuse, adding: “It will help enhance the party’s legitimacy and win back critical support from the public.”

But Wu Qiang, a politics scholar at Tsinghua University, suggested the two years between the first rumours that Zhou was in trouble and the announcement showed the fierceness of the power struggle. “The investigation and ousting of Zhou is in fact a mild coup initiated by Xi to challenge the system of collective leadership,” he said.

Brown said of Zhou: “There are other people whose families are even more cashed up. But he built up an independent kingdom and I suppose it all started unravelling when Bo Xilai was felled.”

Zhou’s closeness to the jailed politician – whom he praised publicly just a week before Bo’s ousting – is thought to have been one of the triggers for his own problems. Bo, the flamboyant former Chongqing party secretary and politburo member, was felled in a scandal sparked by claims that his wife killed a British man. She was jailed for murder; Bo was later jailed for bribery and power abuses.

Through his long involvement with the state oil sector, and as party chief of Sichuan province, Zhou built up alliances and handed out favours. Later, as the head of China’s security apparatus, he was well placed to protect himself by gathering information on others. Under him, the domestic security budget soared, overtaking the military budget, reflecting the leadership’s growing concerns about stability.

But his former patronage networks have been turned against him by investigators. Speculation about his fate built as allies and former staff began to disappear. No one could miss the pattern of detentions across oil companies, in Sichuan and then in the security sphere. Nor the investigation of his wife, son, brother and other close family relatives.

The Xinhua announcement followed months of speculation and increasingly blatant references to Zhou’s case in Chinese media, with some reports identifying him by his relationship to other individuals – particularly his 42-year-old businessman son – albeit not by name.

Analysts predict that Zhou will be expelled from the party in due course, so that his case can be transferred to the criminal justice system, leading to a trial and jail. “After a few months I am sure there will be some kind of prosecution announcement,” said Jean-Pierre Cabestan, of Hong Kong Baptist University, citing the way that previous cases involving senior leaders had been handled. All the logic is that he should end up with a trial, a bit à la Bo Xilai, focusing on corruption and neglecting the political dimension of the case. The question is whether and how he will cooperate.”

Brown said it was possible, though unlikely, that the party could “go for even bigger beasts, for the great clans” in future. “It’s quite a thing to be sitting there in their position and thinking: ‘One day this could be me,'” he said.

The removal of so many officials in connection with Zhou’s case has also paved the way for Xi to promote more sympathisers and, some argue, has sent a signal to state-owned enterprises not to resist reform.

Zhou served as security tsar from 2007 to 2012, stepping down as part of the broader leadership transition that brought Xi to power. The position was then downgraded; his successor Meng Jianzhu belongs to only the politburo, not the standing committee.

Anti-corruption activists calling for officials to declare their assets have been harassed and jailed even as Xi has stepped up his drive against malfeasance.