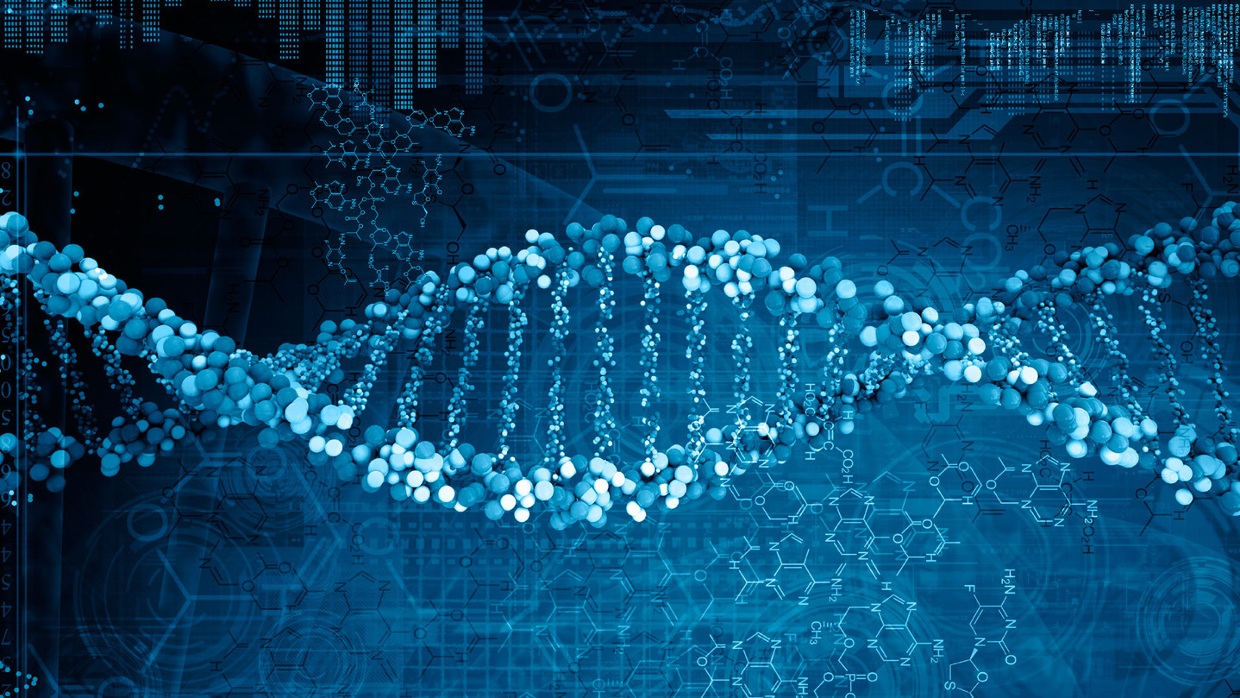 From time to time, various terms are thrown out to advocate on behalf of evolutionary theory.  Typically, these terms are repeatedly used in well-known science journals or websites with no regard to their rationality or scientific validity. The objective is to mold public opinion in order to sustain the evolutionary theory.

“Genetic Drift” is one those imaginary evolutionary mechanisms used for this purpose. The terms “Mutation and Natural Selection” are frequently utilized in a twisted fashion while claims about genetic drift are discussed. Contrary to the scientific facts, these terms are introduced as if there are “processes in nature that work in favor of the evolution and lead to a coincidental acquisition of new genetic data”. However, these processes, which lead to the loss of data rather than acquisition, actually constitute evidence for the invalidity of the evolutionary theory instead of its validity.

What does the alleged Genetic Drift mean?

The word “drift” in English means “to be carried along by currents of air or water,” and “to proceed or move unhurriedly or aimlessly.” Therefore, the intent with the use of the word “drift” which holds connotations of coincidental changes – the fundamental basis of the evolutionary ideology – can clearly be seen here.

What the evolutionists try to implicate by the phrase “Genetic Drift” is as follows:

Darwinists’ assumption which alleges that there is “an extensive randomness in nature and universe,” constitutes the foundation of claims about genetic drift.  Hereunder, “members who will survive or die in a population” or “genes that will be sustained or eliminated in a population” are supposedly determined at random. Thus, the evolutionists called this mechanism, which they think is created as result of random sampling, the “Genetic Drift.”

The allegation of Genetic Drift stands on discourses such as “within a biome, there can be changes in the frequencies of multiple different features of a gene due to artificial or natural events,” and the like. It is claimed that these alleged coincidental changes can cause one particular feature to dominate in an entire population or, alternatively, completely disappear from that population. Now, let’s explain this issue with some examples from evolutionary sources.

Methods put forth as alleged evidence of Genetic Drift:

In the figure above, there are three green and six brown members in the first form of the population shown on the left side. After an event that led to the death of some members of this community, the number of green members has decreased to 1:7. The frequency of a feature within this population has changed as result of the decrease of members without natural selection. This is called “Genetic Drift” in the evolutionary literature. The difference between Genetic Drift and Natural Selection is that while natural selection targets individual members of a population one by one because of a shared common feature, individual members are not targeted in the alleged Genetic Drift. It is assumed that a population would incur cross-sectional losses in Genetic Drift. Darwinists mention some effects and put them forward as evidence for this process in their own way, but these are merely definitions. Now, let’s discuss this issue through some examples:

Expressions such as “the bottleneck hypothesis” and “the Founder effect” do not provide evidence for evolution.

One of the mechanisms of Genetic Drift, as alleged by Darwinists, is the “Bottleneck Effect.” The first bottle in the figure above  (previous generation) represents the first form of the population. Here, it is assumed that a new population is born from the members of a population which survived a natural disaster or disease that killed the majority of the population. Within this population, the frequencies of some features may change as well; for example, let us say that 10 people survived an earthquake that occurred on an island where 100 people resided. When the population is reconstituted by the remaining ten, only the features of the survivors will be seen in the new community. Had the 90 people who died possessed  different features, it would not be seen in the new community. Actually, even if that were the case, it would clearly not be a process of evolution.

Another mechanism that is put forth as evidence of genetic drift is called the “Founder Effect.” According to the “Founder Effect”, changes in the frequency of a population living in a certain region may be observed due to the immigration of a certain part of the population or the isolation of a large proportion of the community and the results of such phenomenon is presented as evidence of evolution.

The claim suggesting that there may be changes within a population through assumptions such as the “Bottleneck Effect” and the “Founder Effect” that are explained briefly herein is true to some extent. Through such events, some members of a population can become prominent or perish: Indeed, history is full of such natural disasters, and the majority of living creatures on earth have perished during these disasters. Of course, a feature of a species may have become prominent during these events, but the impact of such disasters often is the extinction of a species; therefore, what is wrong with this allegation is:

The mechanism of Genetic Drift does not lead to changes in a creature or formation of a new species as alleged. When the explanations above are carefully read through, it can be seen that the Bottleneck and Founder Effects would have led to a decrease in the variation of species, rather than an increase. In the event called Genetic Drift, what happens is “NOTHING but a change in the representation rate of genetic content in a population that already exists at the beginning.” Moreover, once the mentioned feature in the population has perished, contrary to the allegations of evolutionists, the genetic variation at the beginning decreases. As is seen, since  genetic data acquisition does not occur, Genetic Drift cannot be introduced as an evolutionary process.

The fact that epigenetic regulations are introduced as genetic features is a scientific mistake.

In general, Darwinists make a crucial mistake in the examples they give to prove their theories. In their allegations with regards to natural selection or Genetic Drift, they give examples based on phenotype, not genetics. For example, in the first figure above, the example of the color of insects is a difference in phenotypes, and there is no difference among the insects in terms of their genotype or color genes in particular. Genes that code color pigments are determined through epigenetic regulations, which is related to either the openness or closeness of certain genes or the time the gene has remained active for. The same goes for the colors of the flowers as well. In fact, the color regulation, just like we can see  with the wings of butterflies, is not merely a pigment-based phenomenon in some living beings but occurs completely as a physical phenomenon related to differences in light refraction. This is explicit evidence showing us that color determination is not based on genetics. Therefore, in the examples above, it cannot be said that a genetic feature overpowers another one through Genetic Drift.

The siblings born from the same mother and father do not look exactly the same because of the intermixing of genes with different epigenetic layouts. During the formation of sperm and ovum, chromosome pairs exchange genes in a reciprocal manner through a mechanism called “crossing-over.” The different combinations of this gene exchange cause siblings to be quite different from one another. The fact that even those siblings that are considered to be closest to each other genetically have different phenotypes shows that the epigenetic effect is of vital importance, and constitutes another evidence demonstrating that phenotypic differences cannot be introduced as examples of Genetic Drift.

Differences within a species are very little, if any.

The main feature that distinguishes one species from another is that the genetic differences among that species are very little. This difference is smaller than 0.1% in humans, which means that even if you were to compare two humans of different ancestries living far apart from each other, the difference would amount to this ratio at most. Moreover, 85% of this small difference exists among the members of a community who are of the same family. Many of the differences are in areas  not involved in coding genes, which means that the genetic sequence of the proteins functioning within a cell is the same in all humans.

It would not be possible to talk about Genetic Drift within a species consisting of members with the same genetic structure; this is because even if the majority of the members of that population died for different reasons, the remaining members will have the old genetic structure if they keep reproducing.

The Darwinist mindset that attempts to explain the history of life through coincidental changes face many challenges. According to the evolutionist point-of-view, the occurrence of new genetic data and the formation of new species in the long term should be explainable without the existence of a supernatural consciousness (which is unthinkable). Therefore, many irrational and ridiculous stories based on cause and effect relationships that force even the limits of imagination are being written and told. There is one fundamental point that is being overlooked in these stories: Being scientific.

The fundamental basis of science is that it proceeds upon concrete evidence that is acquired through observations and experiments. Evolutionists, who introduce themselves as so-called “unbiased scientists who are free of beliefs,” use these would-be stories without relying on scientific data when they face a roadblock. They try to interpret every issue in favor of evolution, which makes them drift away from science, not to mention being impartial. This is the origin of the problem.

The allegation that Genetic Drift is one of the processes of acquisition of new genetic data is completely unfounded. This allegation, which we have explained with many examples above, is wrong from the very beginning as it is not possible to talk about the existence of a gene drifting. The process that is called Genetic Drift causes the variations in species to narrow down or disappear entirely, not vary, and this contradicts what evolutionary theory argues.

However, the evolutionists, who cannot put forth even a concrete hypothesis on the appearance of life and species, hold on to their imaginary stories of evolution such as Genetic Drift wholeheartedly and try to present them as scientific facts. But when these notions are examined thoroughly, it can easily be seen that they are unfounded and unscientific.

All living species appear in history perfectly and instantaneously. They continue their existence from the moment they appear without changing genetically. This is a fact supported by all scientific evidence. This proves that an evolutionary process has never taken place, and that all living creatures were created by God.