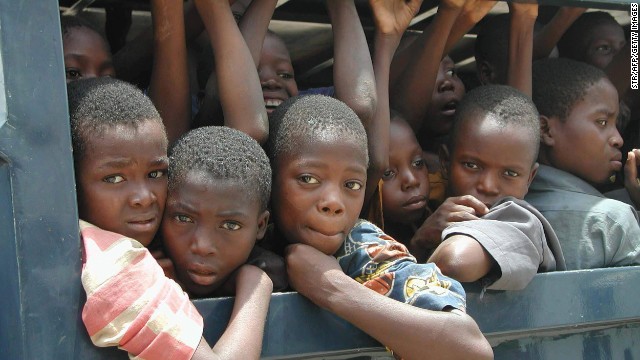 NewsRescue Editor- Many of Nigeria’s house-helps are contract slaves from Togo and other poor neighboring locals.

(CNN) — A new report claiming to be the most comprehensive look at global slavery says 30 million people are living as slaves around the world.

The Global Slavery Index, published by the Australia-based Walk Free Foundation, lists India as the country with by far the most slaves, with an estimated nearly 14 million, followed by China (2.9 million) and Pakistan (2.1 million).

The top 10 countries on its list of shame accounted for more than three quarters of the 29.8 million people living in slavery, with Nigeria, Ethiopia, Russia, Thailand, Democratic Republic of Congo, Myanmar and Bangladesh completing the list.

In terms of countries with the highest of proportion of slaves, Mauritania in West Africa topped the table, with about 4% of its 3.4 million people enslaved, followed by Haiti, Pakistan, India and Nepal.

The index, whose authors claim it contains the most authoritative data on slavery conditions worldwide, is the product of Australian mining magnate and philanthropist Andrew Forrest’s commitment to stamp out global slavery.

Forrest, ranked by Forbes as Australia’s fifth richest man, with an estimated net worth of $5.7 billion, adopted the cause after his daughter volunteered in an orphanage in Nepal in 2008, where she encountered victims of child sex trafficking. Forrest is a signatory to the Giving Pledge started by billionaire investor Warren Buffett, whose members commit to donating at least half their wealth to philanthropic causes.

The index, which draws on 10 years of research into slavery and was produced by a team of 4 authors supported by 22 other experts, is the inaugural edition of what will be an annual report. It ranks 162 countries according to the number of people living in slavery, the risk of enslavement and the robustness of government responses to the problem. Read full on CNN.