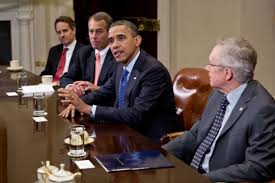 Arabs want US boots to fight their fights. Vice-President Biden, despite his apology was right on. He understood there was no sure bet in sectarian civil war. He ridiculed the claims that Obama could have acted sooner by supplying arms to unreliable rebels in Syria that included ISIS. Those stinger missiles sought could have been used against American planes today.

If Saudi Arabia and other neighboring countries that were funding and arming the Sunni ISIL rebels in Syria did not realize fanatics are coming back to hunt their interest, who in America knows more? These are militias called moderates yesterday that have turned terrorists today. The best Arabs United States could arm were Iraqis that got trained, with the best American made arms; only to turn it over to ISIL since they were Sunni that Shiite Maliki marginalized.

Obama finds himself in the position of being criticized left, right and center. If Obama feels like everyone has turned against him. There is this consolation for Obama. Take heart, anti-War demonstrators are not out, yet. Even Americans that do not want boots on the ground, gives him little credit for his achievements. Criticism by Jimmy Carter hurts more because he thinks Obama waited too long to attack ISIS but agreed Americans boots should not put on the ground.

The only time people go to war is when we cannot resolve our differences. Conservatives create wars outside and breed more enemies in prisons than in school by oppression of minorities and some majority for Liberals to ameliorate. We resort to force short of exhausting our civilized manners and refused to appease or give a way out of any conflict. Conservatives everywhere are willing to humiliate and exaggerate their prowess on complex problem with simple answers.

Conservatives in the Middle East are no different to Conservatives in America. They both think they can achieve their goals by force. No matter how many times they have been proven wrong, they use force as easy solution to every problem if they cannot get their ways. Liberals clean up their mess after simple solution failed. Conservatives belief in religion is so strong, it’s the cause of mass destruction. They still think of Crusade or Jihad, Catholics or Protestants, Sunni or Shiite.

Shooting from the hip better than Obama’s deliberative and professorial skills on critical issues an albatross? He got chemicals out of Syria without firing shots, critics focused on imaginary red line both sides breached. He got Iraq Prime Minister Maliki to step down for alienating Sunni, a partner during the Surge. If you don’t turn off the gas the fire won’t stop. The same Turkey that wants Assad gone before their soldiers will protect their own border, now allows a base for US.

The koko of the matter as we say in my neck of the hood, is the historical division within Muslim sects. It is the Sunni versus the Shiite sect fighting for political power today. The old differences started with succession of Prophet Mohammed. Sunni wanted any competent leader but Shiite also wanted a competent direct line of the Prophet, son in law. Majority of Iraq as Shiite were ruled by minority Sunni, Hussein. But the majority of Syria is Sunni rule by Shiite affiliated Assad.

Since majority of Iran are Shiite and the majority in Saudi Arabia are Sunni, they varied support for those affiliated to their sects. The majority of world Muslims are Sunni, their affiliations spill out to other Muslims around the region and around the world. Complicating matters more, the Kurds a minority in Turkey are affiliated with their Kurds brothers in Syria. As Sunni ISIS fight   Kurds in Syria, the Kurds in Turkey want to help. But Turkey sees Kurds and Assad as enemies.

Critics claimed if American troops were there, they could have made a difference. Apart from keeping American troops there in perpetuity, the maximum amount of American troops that could have stayed were not enough to prevent the ISIS take over with the support of Iraqi Sunni. Maliki revenged at Sunni backfired. Yet they continue to blame Obama for not using American blood everywhere when their interest is to defend and enjoy their country first.

Each time Britain declines U.S.A invitation to go to war after learning its lesson from Iraq War, America understands. Each time U.K Mr. Cameron echoed President Obama message on how to deal with ISIL, Americans critics praised him but deride their President.  Any country or empire that does not pick and chose its fights and spread itself too thin will spend all its resources on wars. No matter how powerful a lion within hyenas, it will be bitten everywhere until it dies.

Leone Panetta, a former confidant and CIA Director of Obama came out to sell a book against a seating President. CIA officers too have a way of kicking back when they think they have been thrown under the bus by the President, but a Director book is huge. Central Intelligence Agency has lost its most important role in this former Director. This is worse. Another former Director J. Hoover that leaked secrets has turned in his grave when Panetta came out with a tell-all book.

There is a reason most presidents surround themselves with friends and distance themselves from their foes. It takes a courageous man at the top to surround himself with ambitious men and rivals. It has advantages and disadvantages. What is surprising here is that most people have described Obama as too eager to compromise and too quick to let opponents know his stand on issue. It must have been difficult for those critiquing him today to find him resolute.

He was elected precisely because he was against the War. They make Obama look as highly stubborn on this position and principled on historical facts, even after listening to everybody. If he had taken their advice, Americans would be in Libya that spilled to Northern Nigeria as Boko Haram, into Yemen, Iraq, Iran and Syria. Sen. McCain has never seen a war he did not want to fight and he would have gone to Nigeria. See Krugman: Obama a More Consequential President.