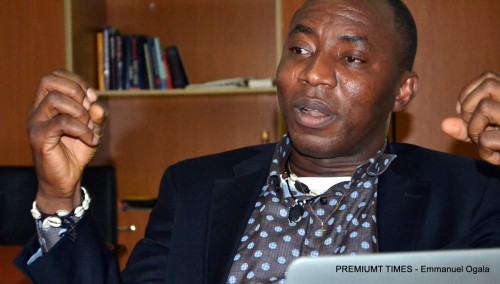 Counsel to the convener of the #RevolutionNow protest, (Omoyele Sowore), Mr Femi Falana (SAN), says despite fulfilling the bail conditions of his client since morning, the Department of State Services (DSS) is yet to release him.

In a telephone conversation with Channels Television, Mr Falana explained that no reason has been given by the agency for its failure to comply with the court order delivered on Tuesday, September 24, 2019.

Justice Taiwo Taiwo had ordered the release of Mr Sowore who is also the publisher of Sahara Reporters.

He was arrested on the eve of his planned protest across Nigeria and detained for 45 days in the DSS custody over allegations of treasonable felony and money laundering.

A day before the 45-day detention was to elapse, the Federal Government filed additional Charges against him.

At the hearing on Tuesday, the Federal Government prosecutor, Godwin Agbadua, stated that Sowore had committed a capital offence and should still be detained in the “interest of justice and national security”.

But Mr Falana argued that his client was charged with insulting the President, money laundering and conspiracy to commit treason, all of which he said are not capital offences.

Consequently, Falana asked the court to order the immediate release of his client.

According to him, there was no longer any competent court order for his further remand.

After hearing arguments from both the prosecuting and defence counsels, the Judge ordered Sowore’s release on the ground that there was no order still in court.

He, however, ordered Sowore to deposit all his travel documents with the court in the next 48 hours and also asked his lawyer (Mr Falana) to present him whenever the court needs him.