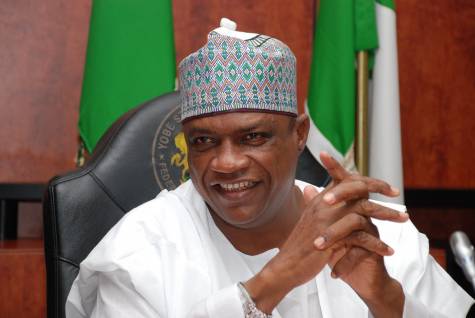 The governor said it was only when that is done that the president’s fight against corruption could enjoy the needed credibility.

“If nothing is done on a case as clear as that of the INEC REC, Nigerians can as well kiss President Buhari anti-corruption fight goodbye,” said the governor in a statement by his spokesman, Lere Olayinka.

Mr. Fayose said it was worrisome that despite the fact that details of the two bank accounts of the INEC REC, which showed that N15 million was lodged into his accounts few days to the April 11 election, was admitted as evidence by the Governorship Election Petition Tribunal in the state, the REC has not been charged to court.

“It is on record that two officials of Diamond Bank Plc and Zenith Bank Plc, tendered exhibits confirming the payment of N15 million into the REC’s accounts by the Aide-de-Camp to Yobe State Governor, Ibrahim Gaidam, Assistant Superintendent of Police, Zakari Deba.

“As at the time the N8 million was paid into the Diamond Bank account, only N28, 000 was in the account.

“Why then is the Yobe INEC REC not being tried yet? Why has he not been charged to court?

“If the Economic and Financial Crimes Commission, EFCC, is foot-dragging on the arraignment of the INEC REC and the governor’s ADC, why hasn’t President Buhari directed the police to commence the prosecution?

“Therefore, in the spirit of President Buhari’s fight against corruption, the Yobe State INEC REC and the ADC that paid the bribe into his bank accounts should be charged to court without further delay.

“This is more so that there are credible evidence(s) lending credence to the fact that the REC actually took bribe to influence the Yobe election.

“This is also important so as to further sanitise the electoral system for more credible elections.

“Anything other than this will mean that the president’s anti-corruption fight is only against some people while others, especially those related to the president either by tribe, religion or political party are sacred cows,” Mr. Fayose said.