President Muhammadu Buhari is not well. It is impossible to deny how severely emaciated, weak and discombobulated he has appeared since returning to Nigeria. This after 51 days supposedly resting in the United Kingdom.

President Buhari’s first address Friday morning when he arrived was anything but coordinated, with the BBC describing parts of it as “rambling.” He missed Friday Jumaah prayers at the villa, which was quite telling. Describing his illness as the “worst ever” in his life, Buhari appeared to mention that he was even given blood while on medical leave.

Convening the federal executive council meeting Wednesday, the president set the house off laughing with perhaps an inappropriate or unexpected remark. While he came early, 5 minutes before the 10 am start time, the meeting which typically lasted till 5 or 6pm under acting president Osinbajo lasted only 2 hours. No more than a few of the planned meeting agenda could possibly have been covered.

Buhari is clearly unable to fulfill the requirements of his office. The question is why the cabal bought him over, seeing how thin and weak he is. SaharaReporters media had severally reported that the cabal had been trying hard to bundle Buhari over against medical advice. Finally they succeeded in bringing him down, giving him immense stress, potentially worsening his condition and putting his life at greater risk.

No one will bring his father or friend over, looking as Buhari does and stress him as they are. These cabal are extraordinarily wicked.

There is clear evidence the cabal are hurrying to use the exhausted and physically stressed president to sign themselves juicy deals and sign off Nigeria’s assets and oil endowment to themselves and their cronies at the expense of Buhari’s health and the nation’s progress. 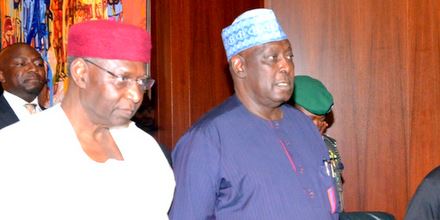 The Senate Should Come To The Rescue

If there is a time Nigeria needs Saraki the most, perhaps this is the time. Fortune and resistance have made and kept publicly indicted, embattled Saraki as Nigeria’s Senate president. It is only the National assembly that can rescue Buhari from these predators and assist him to return to the United Kingdom as soon as possible to receive the health care and rest he deserves, protected from a greedy, insensitive exploitative cabal.

Nigeria is in grave risk as the cabal hurry to manipulate an indisposed, frail Buhari to sign away on documents he is unable to decipher.

The Senate is urged to assist Buhari and Nigeria by ensuring Buhari is protected from the mischievous, corrupt plots and relieved of the daunting task of manning the nation and allowed to rest and hopefully recover as medically advised.