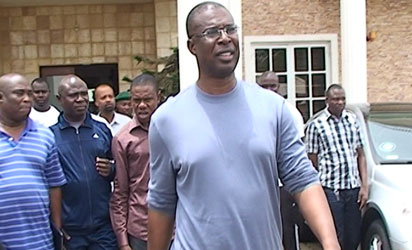 Bayelsa State chapter of the All Progressives Congress (APC) has suspended former governor and gubernatorial candidate Timipre Sylva from the party.

This comes after an alert by the Bayelsa State chapter of the All Progressives Congress (APC), Tiwei Orunimighe, that the former governor Timipre Sylva was selling federal government appointments, including that of a Buhari appointed Minister.

Mr. Orunmighe said Yesterday, “We also want to call on the Minister for Agriculture and Rural Development, Heineken Lokpobiri, to resign his appointment, the reason being that he paid for his ministerial position. I also believe, and those of us standing here know very well, that he is not a member of the party.”

“After due consultations with relevant stake holders and elders in the state, the Bayelsa state executive committee at an emergency meeting today took the painful but necessary decision to suspend our Guber flag bearer in the 2015 elections Chief Timipre Sylva pending the investigation of the following cases brought against him.

“Anti-party activities. We have it on good record Timipre Sylva, last week Tuesday precisely, paid a clandestine visit to one of the south south Governors of the PDP, this is just one of the series of correspondences between them and we find it grossly un becoming.

“This is in direct breach of Article 21, under ‘Offences’ in the party constitution which states in section 2, ‘Anti-Party activities or any conduct, which is likely to embarrass or have adverse effect on the party or bring the party into hatred, contempt, ridicule or disrepute’ Is punishable

“Worse still, is that, members of the opposition who vehemently stood against the change ideal and still do not believe in our party’s course are with him on the bargaining table. This is not in fidelity with the party’s constitution which states in Article 21, section 1, subsection 3 that ‘…Engaging in dishonest practices…’ are punishable by full stretch.

“To save the image of the party and restore confidence among members, the state executive committee hereby suspends Chief Timipre Sylva and his cronies pending the conclusion of investigation. The committee will be inaugurated next week to look into the various allegations.”