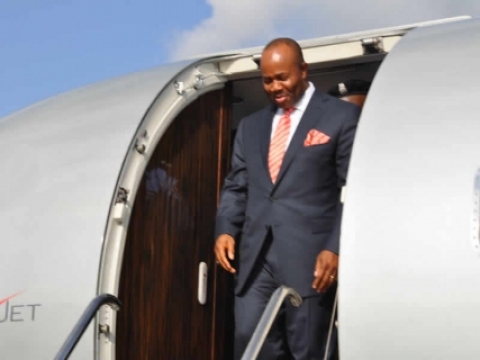 I read with indignation and consternation certain online reports that some “student leaders” in Akwa Ibom State have contributed a whooping sum of # 100,000,000,00 (one hundred million naira ) to the governorship candidate of the Peoples Democratic Party ( PDP ) in Akwa Ibom State, Mr. Udom Gabriel Emmanuel, as their financial support for his electioneering campaigns.

I initially dismissed the reports as a political scam/gimmick aimed at creating a very false sense of popularity and acceptability. However, I was inclined and tempted to take the reports seriously when I read the same report posted on Monday 2nd February, 2015 at 6:37 pm on the official Facebook Page of Mr. Udom Emmanuel.

According to the reports, the donation was announced by one Comrade? Aquila Akpan who I learnt is the current Joint Campus Committee Chairman of the National Association of Nigerian Students (NANS) in Akwa Ibom State. According to Comrade? Aquila, the money is meant to assist the gubernatorial hopeful in his campaigns. He was reported as saying that the student body has a numerical strength of 10,000 students who he claimed are in support of Mr. Udom’s ambition.

I believe that for one to be a ‘student leader’, he must first be a student. So the question is: Who are these students? Where are they schooling? What is their matriculation numbers? What courses are they studying? What level are they? What is their source of revenue and where on earth did or will they sourced such huge funds from?

We keep making a mockery of our so-called democracy when saner climes are ambitiously moving towards digitalisation and global best practices. This donation is the latest proof of what some of us have been saying these past years; that what we have today in Akwa Ibom State is not a government properly so-called, but a grand larceny. It is just a violently organised system of theivery.

Those ragtag, criminally minded and shameless “student leaders” should be invited by the police for questioning immediately. It is either they are robbers, kidnappers or yahoo yahoo fraudsters.

Today, we have lost all modicum of sanity in Akwa Ibom State. I am deeply scandalised as an Akwa Ibom person that such huge sums of money can be donated by so-called “student leaders” in a state where teachers in public primary and secondary schools are currently on strike over unpaid salaries and other entitlements. Where on earth did those buffoons get or intend to get one hundred million naira from in a state without employment opportunities; a state without industries?

When I talk, slave minds, sycophants and yes men of governor Akpabio will lacerate and denigrate me. But can’t we see the incalculable damage that Governor Godswill Obot Akpabio has done to Akwa Ibom State? Can’t we see that there is no future for that state with this prevailing monstrous culture of official banditry and thievery?

Only a governorship candidate with a criminal mind, whose goal is to steal and loot will accept ONE HUNDRED MILLION NAIRA from some unemployed lazy minds? How does Udom Emmanuel Intend to repay them if he emerges the governor? That donation cannot be charitable, it is made with an expectation.

If the so-called “student leaders” are that charitable, they would have raised and used such huge funds to cater for the welfare of those they claim to be “leading” and “representing” through scholarship grants. This donation has gone a long way to unveil the real Udom Emmanuel. We now know that those saying that he is a clean man are talking nonsense. Like I said in a previous article – a product cannot sell beyond the limits of its marketer(s). Illegitimacy can not give birth to legitimacy

To the best of my knowledge, there is no student leader in Akwa Ibom State. Anyone claiming leadership over the students of Akwa Ibom State is a thief. Which of the students are they leading? Is it the same students that have been so unabatably victimised, oppressed and relegated by the state government and the management(s) of their schools? Where were these emergency comrades when 44 innocent students of University of Uyo were unlawfully arrested and detained for months on trump – up charges before the State High Court discharged and acquitted them?

We have degenerated into a soulless society where criminality, thuggery and banditry are elevated to official state policy and the consequences are here with us; cultism, assassinations, robberies, ballot box snatching, joblessness, poverty and other appalling social vices. However, we need to appreciate that nation building is not about the number of citizens that can kill in the name of politics. We cannot continue like this as a state, people and nation.

I weep for Akwa Ibom State!

Inibehe Effiong is a Human Rights Activist based in Lagos, Nigeria and the Convener of the Coalition of Human Rights Defenders ( COHRD ).