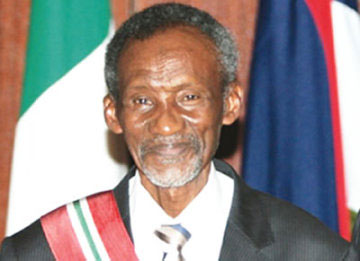 The Supreme court headed by Justice Mahmud Mohammed has explained that it helped the corrupt PDP win all the cases by abandoning the card reader results in favor of the corruptly inflated voters registers. Justice Chima Centus Nweze said on behalf of the court while delivering the judgement:

“With the advantage of hindsight, INEC, pursuant to its powers under the said Electoral Act, authorised the deployment of the said Card Readers. “Even with the introduction of the said device, that is the Card Reader Machine, the National Assembly, in its wisdom, did not deem it necessary to bowdlerise the said analogue procedure in section 49 from the Act so that the Card Reader procedure would be the sole determinant of a valid accreditation process.

“Contrariwise, from the Corrigendum No 2, made on March 28, 2015, amending paragraph 13(b) of the Approved Guidelines, it stands to reason that the Card Reader was meant to supplement the Voter’ Register and was never designed or intended to supplant, displace or supersede it.

“Indeed, since the Guidelines and Manual, which authorised the use and deployment of the electronic Card Reader Machine, were made in exercise of the powers conferred by the Electoral Act, the said Card Reader cannot, logically, depose or dethrone the Voters’ Register whose judicial roots are, firmly, embedded or entrenched in the selfsame Electoral Act from which it )the Voters’ Register). Directly, derives its sustenance and currency.

“Thus, any attempt to invest the Card Reader Machine procedure with such overreaching pre-eminence or superiority over the Voters’ Register is like converting an auxiliary procedure- into the dominant procedure- of proof, that is, proof of accreditation.

“This is a logical impossibility. Indeed, only recently, this court in Shinkafi vs Yari, confirmed the position that the Card Reader Machine has not supplanted the statement of results in appropriate forms; hence, the appellant still had the obligation to prove petition relating to accreditation of voters and over-voting as enunciated in several decisions of this court.”