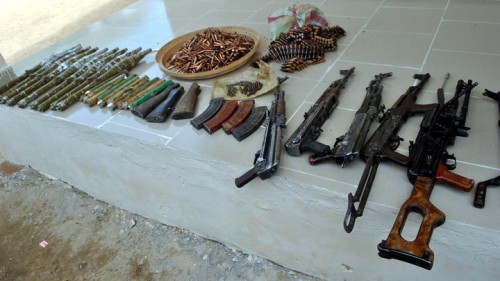 The Ogun State Command of the Nigeria Customs Service (NCS) has intercepted 1,480 cartridges of live ammunition concealed in 15 bags of rice from smugglers along the Abeokuta-Igboora bush path.

Controller of the state command, Comptroller Haruna Mamudu, on Monday said his men got wind of the illegal movement of the ammunition and had laid an ambush for the criminals, who appeared to have got wind of customs’ plan.

Mamudu explained that the smugglers later abandoned the ammunition cleverly stuffed into the bags of rice and fled into the bush.

He said, the command also made a seizure of nine sacks of Indian hemp at the Imeko area of the state.

Mamudu said, “This is one of the tactics being adopted by smugglers, which we are already aware of. Recently we made the same type of seizure of ammunition at the Imeko area.

“Given the security challenges in the country occasioned by insurgency, the command has re-arranged its anti-smuggling strategy and the result is what you are seeing today.”

The area controller said the command would hand over the ammunition to the police, the appropriate government agency concerned with arms and ammunition.