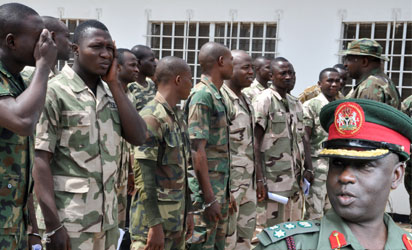 GIVE US 54 SOLDIERS FOR THE NEW YEAR

An Islamic human rights advocacy group has hailed President Muhammadu Buhari for ordering the release of Colonel Sambo Dasuki (rtd) and Omoyele Sowore. Both were released by the Department of State Security (DSS) yesterday. Dasuki was detained three years ago over the $2.1 million arms fraud case while Sowore was incarcerated for leading #Revolutionnow Movement.

MURIC expressed its mind in a press statement distributed to the media on Thursday afternoon by its director, Professor Ishaq Akintola. But while hailing the Nigerian president, the human rights organization demanded the release of the 54 soldiers serving jail term for asking for better weapons to fight Boko Haram.

“We express our profound gratitude to President Muhammadu Buhari for releasing Colonel Sambo Dasuki (rtd) and Omoyele Sowore. It shows that our president is listening. But like Oliver Twist, we ask for more. If it is true that Dasuki was detained over the $2.1 million arms fraud case (and it is), what becomes of the poor soldiers who exposed the fraud but who, paradoxically, are still languishing in jail?

“Nigerians became aware of the poor weaponry among federal troops fighting Boko Haram when the 54 soldiers demanded better arms. They are therefore heroes, not villains and should not be languishing in jail. It was their protest which led to questions regarding the $2.1 million meant for the purchase of sophiscated weapons but which was diverted to fund political campaign.

“President Buhari exhibited magnanimity by releasing Dasuki and Sowore. It is true that those two men have people, including the media, crying out day and night for their release unlike the 54 soldiers who have nobody to agitate for them. We beg the president to show mercy to these young men. ‘The quality of mercy is not strained. It droppeth as the gentle rain from heaven upon the place beneath’.

“We have borrowed the words used by William Shakespeare in the Merchant of Venice to appeal to Mr. President to use his prerogative of mercy in the case of the 54 soldiers. Mercy is ‘twice blest; it blesseth him that gives and him that takes’, Shakespeare added. Dasuki and Sowore were Christmas gifts to Nigerians, MURIC is demanding for the release of the 54 soldiers as New Year hampers.

“Finally, we laud President Buhari for setting Col. Sambo Dasuki (rtd) and Omoyele Sowore free. We congratulate the families of the two men and all those who intervened in their cases. We appeal to the president to exercise his prerogative of mercy by setting the 54 soldiers free.”