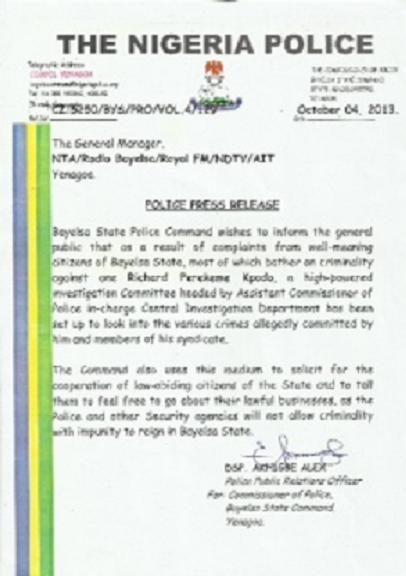 NewsRescue– It has become necessary for us to cry out in view of the war declared on the New Peoples Democratic Party (NPDP) and its members by certain agents and henchmen of the Goodluck Jonathan administration who have embarked on a mission to intimidate and overawe us, using various unconstitutional means to achieve their selfish goals.

The past few weeks in particular have witnessed the implementation of a well coordinated and systematic plot to traumatise, annihilate and cripple us economically and politically in flagrant disregard of Chapter IV Section 33 to 45 of the Nigerian Constitution that guarantees our fundamental human rights as Nigerians. A few examples of the excesses of these agents of confusion and enemies of democracy would suffice:

Contrary to the provisions of Chapter IV Sections 42, 43 and 44 of the Constitution which guarantee our right as Nigerians to acquire and own property in any part of the country, our National Secretariat and most of our State Secretariats have been sealed up by the Police on the orders of those in power. This is despite the fact that we still have a court case against Alhaji Bamanga Tukur and his National Working Committee (NWC).

Two weeks ago, the Federal Capital Territory Administration (FCTA) in its over zealousness to please President Jonathan marked our sealed National Secretariat for demolition on the laughable excuse that it was originally approved as a residential building. Yet this property was being used as the National Secretariat of another political party, the National Democratic Party (NDP), before New PDP acquired it – and the same FCTA kept mute! At that time, the FCTA did not realise that it violated land use but it now wants to demolish the building in a hurry simply because the authorities perceive the new owner (New PDP) to be anti-government! What is more, the Adamawa State Lodge, also in Abuja, which we were using as temporary National Secretariat, has also been sealed off on the flimsy excuse that the area is not for commercial activities!

This invidious crackdown has been extended to individual leaders of the New PDP. The legally acquired Abuja property of His Excellency, Dr. Rabiu Kwankwaso, the Governor of Kano State, has been revoked by the tyrannical Federal Capital Territory (FCT) Minister, Senator Bala Mohammed. The same treatment has been meted to Senator Aisha Al-Hassan from Taraba State, whose event centre, A-Park Gardens, which has been in operation all these years, has suddenly been revoked by the FCTA and slated to be demolished at any time from now. Information available to us indicates that property in Abuja owned by other New PDP leaders may suffer the same fate.

Today, the security details attached to Senators Abubakar Bukola Saraki and Danjuma Goje, former Governors of Kwara and Gombe states respectively, have been withdrawn; so, too, the security details attached to our National Chairman, Alhaji Abubakar Kawu Baraje. Of course, Governor Rotimi Chibuike Amaechi of Rivers State was the first victim and now operates without an ADC and a CSO in order to pave way for his kidnapping or assassination if peaceful ways of removing him from office have fail. The police orderlies of the Rivers State SSG and those of Amaechi’s Chief of Staff have also been similarly withdrawn without any cogent reasons.

The use of the Economic and Financial Crimes Commission (EFCC) to hound our members is no longer news. His Excellency Timipre Sylva, the former Governor of Bayelsa State, and Senator Abubakar Bukola Saraki are two foremost examples. We understand that the worst is yet to come as this unserious organ masquerading as an anti-graft agency would soon be unleashed on all our key members in both the Senate and House of Representatives in an operation code-named “Operation Coerce Them Back to Tukur”.

On its part, the Nigeria Police, which has woefully failed to find a solution to the menace of Boko Haram, kidnapping, assassination and other criminal acts ravaging the country, has been given a fresh mandate to frame up our members and term them criminals in order to keep them at bay. The experiment has already started in Bayelsa, the home state of President Jonathan, where 85% of the citizens have indicated interest to work against his second term ambition due to the total neglect of the state and the entire Niger Delta region by the present administration. The Press release by the Bayelsa Police Command attached and displayed below attests to this evil strategy!

According to the Bayelsa State Police Command in its press release attached and displayed below dated October 4th, 2013 and signed by the Police Relations Officer, DSP Akhigwe Alex, on behalf of the State Police Commissioner, “Bayelsa State Command wishes to inform the general public that as a result of complaints from well-meaning citizens of Bayelsa State most of which bothers on criminality against one Richard Poekene Kpodo, a high powered investigation Committee headed by Assistant Commissioner of Police in-charge of Central Instigation Department has been set up to look into the various crimes allegedly committed by him and members of his syndicates”

But what is the crime of Chief Richard Kpodo? He has suddenly become a criminal by joining and becoming the State Chairman of the Baraje-led faction of the PDP in Bayelsa! Curiously, his present hunters have conveniently forgotten that this was the same man who was in the forefront of the Campaign Team of President Jonathan in 2011. His State Secretary, Sidi D. Godwill, was the Zonal Youth Leader of PDP. These two, together with all other key members of the Baraje-led PDP, can no longer visit Bayelsa State just because of politics!

The crackdown took a new and frightening dimension yesterday morning 26th October, 2013 when Tonye Okio, the Publicity Secretary of the New PDP in Bayelsa State, was abducted by the Bayelsa State Police Command in a commando fashion in his Abuja residence and whisked off to Bayelsa for a possible trail as a criminal just because he speaks against the tyrannical style of leadership of the present leadership in the country.

Few days ago, in a move to root out our people in Gombe State one of the mainstay of our party based on the revolutionary regime of His Excellency Senator Danjuma Goje and his unremarkable feats in areas of road construction, health, education, rural development and provision of portable water which made him the toast of the masses of Gombe and after the Baraje led PDP has overrun both the Government machinery and the aging Tukur’s faction of PDP, our leader in the State, Hon. Barr Mohammed Magaji Doho who was the Commissioner of Water Resources for eight years during the golden tenure of Senator Goje has been arrested. This bulldozer and a ruthless grass-root mobiliser together with 68 of our members were arrested by the Police Command in Gombe State for no cogent reasons.

This ruthless trampling on our fundamental human rights leaves no one in doubt that the Jonathan administration is intolerant of opposing views. Nigerians can now see what we meant when we said that these people are no democrats. They are intent on turning our country into a banana republic where the rights of Nigerians no longer count. Nigerians should prepare for the worst because today it is New PDP but tomorrow it would certainly be somebody else.
We hereby appeal to President Jonathan to be a statesman and call these dogs of war to order before they do irreversible damage to our dear country. We also call on Nigerians to intensify prayers for us and our troubled nation even as we restate our resolve not to go back on our sacred duty to reform the PDP and contribute our quota towards the evolution of a truly democratic Nigeria where the rights of all citizens are respected irrespective of their political affiliations.