The latest press release by the Nigerian government through Minister of information, Lai Mohammed, in defense of the deal struck with Boko Haram is frustratingly misleading.

The information minster renowned for the false claim that “I’ve never been so sick in my entire life, Buhari” was “hale and hearty,” defended a “prisoner swap” with Boko Haram terrorists in a deal that media reports say a massive sum of FOREX was also paid to the terrorists, with two comparisons. I quote:

“Didn’t superpower United States engage in negotiations with the Taliban that led to the exchange of five Taliban fighters for US Army Sgt Bowe Bergdahl in 2014?

The problem with the examples the minister gave that were misleading either by error or intention is that in none of the examples did a sovereign nation pay and release terror masterminds into its own territory. The US released the Taliban fighters into Afghanistan, another country it bombs daily with tens of thousands of civilian casualties; and Israel released Palestinian soldiers to Palestine. I am not even going to discuss whether the Taliban and Hamas are terrorists here, which many say they are not but fighting an external occupation.

If the US ever dared pay and free terror masterminds on US soil, you can expect not just a massive class action law suit from the public, but also immediate Senate impeachment of the US president.

And you can take that sentence to the bank.

I feel sorry that I have to write to point this out. I had earlier written an article explaining why just like I repeatedly advised and warned former President Goodluck Jonathan, it is likewise wrong, treacherous and a violation of Nigeria’s anti-terror bill and the laws of God, for Nigeria to pay and free terrorists with blood and/or rape on their hands. Freeing terrorists and paying them is punishable by life imprisonment. [Ref: The Terrorism (Prevention) Act 2011 and Amendment Bill of 2012 with amendments to Section 17]

When two nations fight wars, yes they swap prisoners. When a nation does not give a damn about another and nor do the others’ leaders care about their people, then it dumps terrorists out to roam free within the other nation’s territory, but no nation that respects its citizens and knows its sworn duties and obligations to protect human life, ever frees terror masterminds onto its soil. Whoever kills shall be killed. This is the law.

I had advised Goodluck Jonathan in the past that he could release wives and children of terrorists in captivity but never convicted killers and rapists who should have already been killed as Cameroon and Somalia do with their apprehended terrorists.

Prisoner swaps read of globally are between waring separate nations or entities within separate nations, never within a sovereign nation with a constitution that binds everyone within its borders. 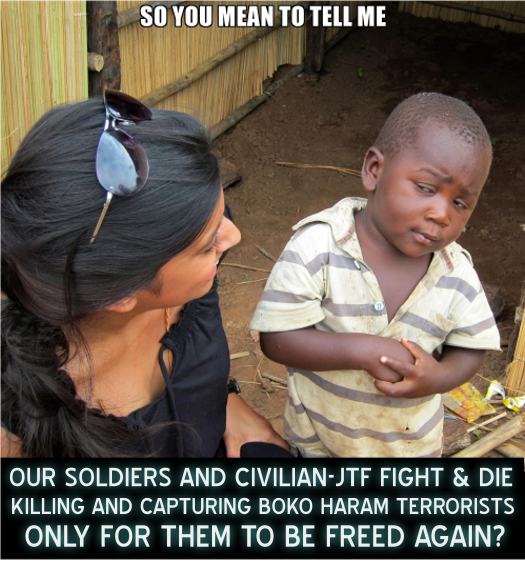 By paying terrorists millions of dollars and freeing terror masterminds, while the sentimental aspect is pleasing – Chibok girls get released– we have funded terrorists who will use the money to buy ammunition to kill in Nigeria, Cameroon, Niger, Chad and even Iraq and Syria where these terrorists have partnerships. They will not use the money to buy denim jeans and Marc Jacobs hand bags.

By freeing terror masterminds within our territory, we are supporting terror as these people are not going home to repent, but are coming back with a vengeance to once again use their commander skills to cause death and abductions of millions.

Again, as I mentioned in my earlier article, the constant cycle of paying terrorists who abduct girls or bomb pipelines is the promotion of a continuous vicious cycle of terror in Nigeria. Many say Boko Haram in the first place was a northern equivalent of MEND, seeking compensation. [See: Mixed Blessings –Funding Boko Haram And Releasing Terror Masterminds To Free Chibok Girls]

Should the minority Islamic movement of Nigeria, IMN, popularly called the Shia Muslim group, take a tip from Lai Mohammed’s gloating and defense of this government action, to decide to abduct 200 innocent girls in order to facilitate the release of some 200 citizens detained in Kaduna since 2015 and their leader and his wife still illegally detained by the FGN? And also expect to make some cool millions of dollars from the proceeds of the post-abduction negotiations? Perhaps this is what Lai Mohammed and the FGN is waiting for before exhuming to investigate Mando mass grave where hundreds of victims were buried…and delivering justice to that massacre incident. On the topic, it is interesting to note that many who feign sympathy for the release of the girls, and say anything can be sacrificed, bat no eyelid over the 200 detained Zaria victims including minors whom the Kaduna government seeks a death sentence for, and raised no alarm when the government massacred 1000. Are we a nation of hypocrites with politically skewed hearts?

Interestingly, the Chibok parents are some of the most exemplary human beings and citizens of Nigeria. At a time when former president Jonathan used their children as an excuse to not properly fight Boko Haram, they told him that “they had already buried their daughters,” and he should go ahead and crush the terrorists. The lives of the Chibok girls were never in our hands but in God’s hands. We must never use the Chibok situation as pawns in political image battles.

There are reasons why there are rules. The repetitive blatant violation and disregard of the laws by the Buhari government is a major wound to our future that will not be repaired for the next 300 years. Everyone including leaders we love or dislike must be held accountable to the law and never operate above and outside the laws.

We must grow beyond political photo shows, sentimental and childish thinking and uphold the laws of the land and God at all times. These laws were laid down by God or carefully thought out by man.