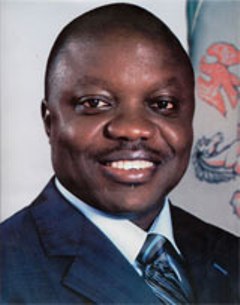 Members of the Delta State House of Assembly were on Tuesday thrown into a state of astonishment when they discovered that one of the seven persons nominated by Governor Emmanuel Uduaghan for appointment into the Delta State Tourism Board had died a while ago.

Last week, Mr. Uduaghan had included the name of James Youmu in a list of nominees for the state’s tourism board that was forwarded to the legislature for screening and confirmation. Mr. Youmu has been dead

The other nominees for the same board are Efe Afe, Peter Okolotu, Hyacinth Iyere, Amah Agbajoh, Abel Eyube and Joe Morg.

There was a mild drama during the screening when Mr. Youmu, the fourth nominee on the list, was called up. Mr. Afe, a former member of the state assembly who was screened as the chairman of the board, immediately told the House that the said James Youmu had died even before the names were sent for screening.

The embarrassing situation raised eyebrows among lawmakers. The strange incident became a new chapter in the governor’s controversial actions regarding the membership of the state-owned agencies and parastatals.

Last week, a prominent member of the Delta State House of Assembly had told SaharaReporters that he was dismayed that the governor sent a list of nominees for the boards of state-owned agencies after the governor had sworn in the nominees into office three months ago. The legislator said that the governor’s belated action was “evidence that Governor Emmanuel Uduaghan has lost focus.”

Other legislators also told SaharaReporters that they were taken aback by the governor’s letter forwarded a letter with the names of nominees after he had inaugurated them, thereby violating the law. “Why did His Excellency send us names of nominees for state boards for screening and confirmation when the boards were inaugurated by the same governor some months ago?” one of the state lawmakers wondered.

Several of the legislators wondered why none of the governor’s aides had warned him against inaugurating boards without first forwarding the names of their members to the state assembly for vetting and approval, as demanded by law.

The latest development, where a dead man’s name appeared on the governor’s list, caused consternation among Deltans who went to the state assembly to witness the screening and confirmation exercise. “Who come put dead man for board?” one of the spectators mused, speaking in pidgin language.