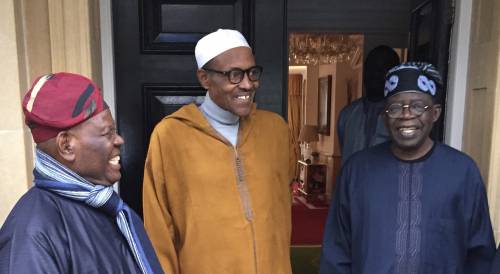 Presidency sources have said that President Muhammadu Buhari plans to return to Nigeria on Saturday after his test results came in “fine.” However, Mr. Buhari’s return remains uncertain as his team of doctors in the United Kingdom has yet to certify him fit to take on the significant burden of his office.

SaharaReporters learned that members of Mr. Buhari’s inner circle were pressuring him to return to Nigeria in order to avoid a power vacuum that could scale down their influence.

President Buhari caused anxiety amongst Nigerians when he abruptly left Nigeria on a 10-day vacation late January. He failed to return to Nigeria last week at the expiration of his vacation, instead writing to the Senate to indicate he was extending his leave in order to receive results from certain medical tests.

A variety of conflicting responses from the president’s aides and associates, including Vice President Yemi Osinbajo, helped deepen the uncertainty about Mr. Buhari’s status. Many Nigerians and other groups accused the Presidency of hiding the true status of President Buhari’s health.

The situation was further worsened by fake news websites that consistently churned out rumors about the president’s hospitalization in a comatose state and even his death.

SaharaReporters learnt that President Buhari remains in frail health and requires treatment for an undisclosed ailment that requires his absence from Nigeria for a prolonged time. However, owing to the volatile political situation in Nigeria, some members of the president’s inner circle have been persuading Mr. Buhari that he cannot afford to take more time off.

Our sources stated that members of the political establishment surrounding Mr. Buhari are persuading him to accept a piecemeal medical treatment plan rather than adopt a plan recommended by his UK doctors that would take several months for treatment and recovery. The president’s associates are reportedly afraid that a prolonged tenure as acting President for Mr. Osinbajo could significantly change the power equation against them.

President Buhari met two top All Progressives Congress (APC) leaders in an undated photo released yesterday by the Presidency. APC national leader, Ahmed Bola Tinubu, and the chairman of the party’s Board of Trustees, Bisi Akande, were seen in photos meeting with a smiling President Buhari.

However, SaharaReporters learned that several APC members, including Governor Nasir El-Rufai of Kaduna State, who had booked their flights to London to see Mr. Buhari were told to stay back in Nigeria and await further instructions from the team of doctors in the UK who would have some say regarding whether the president returns tomorrow or later.

One of our sources disclosed that, even if President Buhari returns to Abuja on Saturday, he would soon have to travel again to the UK to seek further treatment.