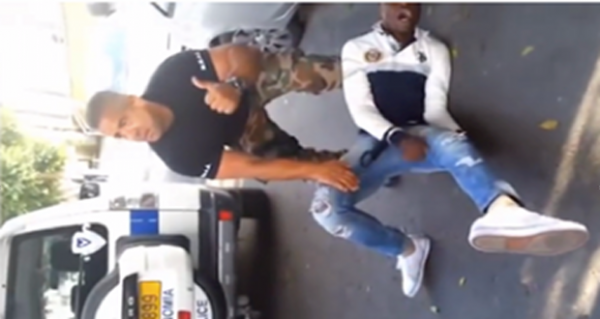 Cyprus police officers reportedly broke the leg of an Ivorian man in the capital city of Nicosia on Wednesday, November 27, 2013.

Police reportedly broke the leg of the Ivorian man while trying to subdue him.

The men presented documents to police showing they were legally residing in Cyprus and one of the men accused the police of racially profiling them.

CyprusMail: KISA said that a police patrol with three police MMAD officers randomly stopped three African men, all black, between Eleftheria square and the Ohi roundabout in the heart of Nicosia on Wednesday, a shortly after 1pm.

All men presented papers showing they were in Cyprus legally.

One of them accused police of racial profiling, choosing to stop them for no reason because of their skin colour, KISA said.

The video shows the man fall on the ground as a police officer tries to handcuff him.

The man is screaming and his leg appears broken. “It’s come apart,” the police officer said as he was handcuffing him.

“I ask you a simple question. Why because I’m black that you control me?” the Ivorian man told police.

KISA said the man has been living in Cyprus for seven years and is married to a Cypriot with whom he has a four-year-old child.

Off camera, another man said in English: “Let the world [see] what is happening. This [is] what blacks go through here.”

“Can you see? This is someone’s leg. It’s broken.”

The independent authority for the investigation of allegations and complaints against the police have confirmed they have received an official complaint and will be appointing a criminal investigator.

Minister of Justice and Public Order, Nicolaou Lonas, said he will investigate the occurrence.

The Ivorian man has been living in Cyprus for seven years and is married to a Cypriot. They have a four-year-old child together.

Below is a video of the incident. This video may be disturbing to some viewers!