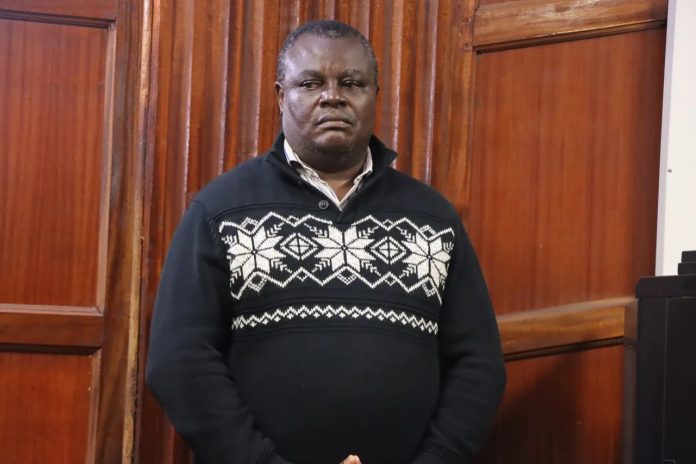 A medical doctor identified as Patrick Eshiwani Amok has been arraigned in court over the attempted murder of his wife, Catherine Njogi Kamau, and her alleged secret lover, Kennedy Ontiriah Momanyi, who is also a medical doctor.

The doctor who works at Aga Khan Hospital, Kisumu branch, appeared before Principal Magistrate Bernard Ochoi at Milimani Law Courts on Friday, November 11, where he faced charges of attempted murder.

It was alleged that he hired two sets of hitmen to execute the job for him. Amok is said to have paid more than Ksh500,000 to have the wife and her new lover killed. One of the hitmen the name Michael Ogola was exposed to the officers by an informer.

Upon interrogation, the informer told police officers that he was told by one of his friends that Dr Amok had contracted hitmen to kill his wife and her alleged secret lover, claiming that the secret lover had snatched his wife.

The informer further said that Amok organized a meeting where they negotiated a price of Ksh1 million for the job.

The figure was later bargained to Ksh700,000 and a down payment of Ksh 400,000 was made at a restaurant within Milimani Area in Kisumu.

“The hitmen namely Micheal Ogola, Meshack Magena and Micheal Oyombe shared the amount amongst themselves and Amok sent an image of his wife to them for identification through WhatsApp. It was agreed the balance of Ksh300,000 was to be paid on the execution of the two murder schemes.”

Dr Amok also sent photographs of his residence and his wife’s motor vehicle to the hitmen.

When summoned for interrogation, he told the police that he was married to Njogi and they have two children. The medical doctor also said they’ve been having marital issues and he suspects their second child was sired by the alleged secret lover.

“He claimed that they have been having marital problems based on suspicion that his wife had extramarital affairs. he said that he had suspected that his second born child was sired by Dr Kennedy Momanyi whom he suspected to be his wife’s secret lover.”

After Amok denied the charges, the magistrate ordered that he be released on a bond of Ksh300,000 with alternative cash bail of Ksh 150,000 pending hearing and determination of the case.