July 30, 2014 NewsRescue– A reader made this serious allegation against the person of Dokubo-Asari: 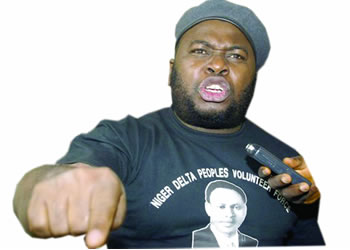 “…Buhari was not using bullet-proof car before. I know Buhari very well. Why did he use bullet-proof car that day? He did not die. None of his aides died…”   – Asari Dokubo speaking at a press conference (page 5, SUNDAY SUN, July 27, 2014)

1. How come Asari Dokubo knows Buhari very well, as claimed by him,considering they are not residential neighbours in any town?2. How and why did he know Buhari doesn’t use bullet-proof cars excepton that particular date?3. Does it mean he knows all the cars General Buhari has?4. If so, why and how did he know all the cars General Buhari uses?5. Does it mean he has been monitoring the movements and personalactivities of the General?6. Why was he interested in the personal details and movements ofGeneral Buhari?7. At what point in time did he generate interest in knowing all thecars and movements of the General?8. Why was he fuming and angry that General Buhari and his aides didnot die so much that he had to call a press conference to express hisanger and frustration?9. And, why is Asari Dokubo angry that General Buhari usesbullet-proof cars? Has it become unlawful to use bullet-proof cars inan insecure country by those who can afford it?10. Finally, hasn’t this same Asari Dokubo threatened General Buharialong with other northern or Hausa/Fulani politicians and leaders inhis previous media interviews?For those who don’t know, Asari Dokubo is a high profile terroristwith direct access to Nigeria’s Presidential Villa, and when thegovernment of Benin Republic arrested him in December 2013 over BokoHaram related activities it was the Jonathan government that pressuredthem to release him. Again, it becomes imperative and compelling for the internationalcommunity to help Nigeria unearth every fact and truth relating to thesecurity crisis in the country, which also makes it compelling thatthe Obasanjo and Nyako letters should be revisited.