Independent- Donald Trump thinks the work ebola doctors are doing to combat the threat of the deadly virus with no cure spreading across African borders is great.

But, he’s said, if they get infected, they’ll have to “suffer the consequences”.

In a spectacular series of tweets posted over the weekend, the American business magnate stunned followers with his cut-throat approach to stopping the virus travelling overseas to American shores.

In short, if you’re from the United States and you get infected, he doesn’t think you should be allowed back.

“Treat them, at the highest level, over there,” he tweeted, before posting the following: 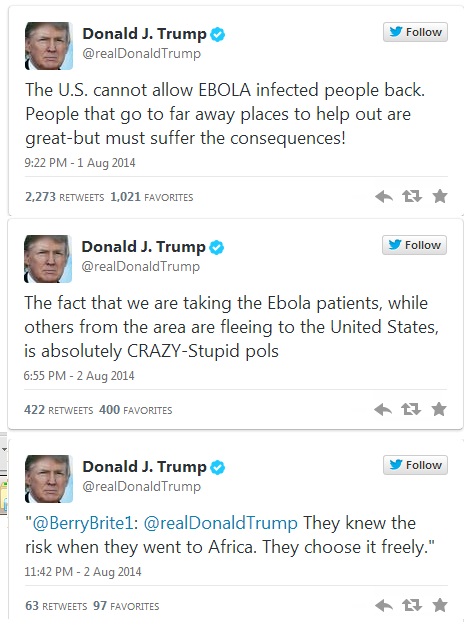 So far, so harsh.

But he continued, imploring the USA to “stop all flights from EBOLA infected countries” otherwise “the plague will start and spread inside our ‘borders’.”

His words come as American Dr. Kent Brantly was struck down with ebola in Africa during an aid mission. He returned to the US on Saturday, and has been receiving treatment at the Emory University Hospital in Atlanta, where is condition is said to be improving.

She is expected to be flown back to the United States to receive treatment later this week.