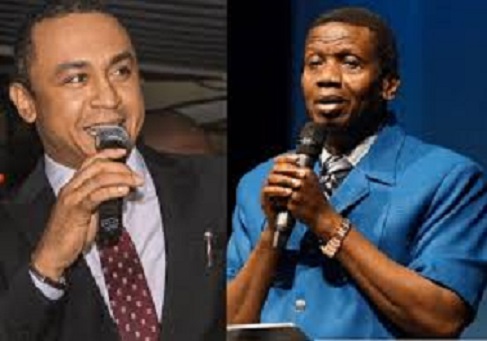 When Daddy Freeze identified tithing as a modern-day scam in a fascinating interview, I was also asked to weigh in on the same issue by SaharaReporters. But I declined because I did not think it was necessary to add anything to what he said. However, I have changed my mind seeing that some church heavyweights have come out swinging at him in the bid to undermine his message and safeguard their illicit financial bottom line.

They have tried to muddy the waters by deriding Daddy Freeze’s assertion that in biblical times, it was scriptural to eat your tithe in the house of God and wash it down with a glass of beer. They also hastened to intimidate Christians by insisting if they don’t tithe, they would be cursed. That is a lot of hogwash. The very attempt to invoke curses in a simple debate about tithing indicates a bankruptcy of reason. Threatening Christians in order to force them to give is witchcraft; it is not the way of Christ. The New Testament position says: “Let each one give as he purposes in his heart, not grudgingly or of necessity; for God loves a cheerful giver.” (II Corinthians 9:7). Giving in order to avoid curses is giving “of necessity;” not cheerful giving. Winebibbers – it is biblical to drink beer in church.

The word of a General Overseer cannot override the scriptures. Moses says take your tithe: “to the place the Lord your God has chosen. When you arrive, you may use the money to buy any kind of food you want—cattle, sheep, goats, wine, or other alcoholic drink. Then feast there in the presence of the Lord your God and celebrate with your household.” (Deuteronomy 14:25-26). Beer is an alcoholic drink; that means you could drink it in the “house of God.”

A General Overseer cannot be holier than Jesus. Jesus drank alcohol. That is why his self-righteous opponents called him a “drunkard.” (Matthew 11:19). In the first miracle he performed, Jesus did not turn water into Ribena or orange juice. He turned water into wine. Don’t buy the lie: biblical wine is fermented and therefore alcoholic. Moses specifically says: “wine or other alcoholic drink.” (Deuteronomy 14:26). That means the tithing wine is alcoholic. Drinking alcohol is not a sin, but drunkenness is. (Romans 13:13).  Paul says: “Do not get drunk on wine.” (Ephesians 5:18). He does not say: “do not drink wine.”

Drink it, but not to the point of drunkenness. The wine used for Holy Communion is alcoholic. When the Corinthians were having Communion in an unruly manner, Paul complained that: “some go hungry while others get drunk.” (I Corinthians 11:21). No-body gets drunk on non-alcoholic wine. Curses and blessings Let no believer be intimidated by vain curses: “Curses will not harm someone who is innocent.” (Proverbs 26:2). Tithe or no tithe, believers are blessed: “with every spiritual blessing in the heavenly places in Christ.” (Ephesians 1:3).  Therefore, God would never curse us. As God said to Balaam concerning Israel, “You must not put a curse on those people, because they are blessed.” (Numbers 22:12). Pastors and General Overseers should desist from manipulating Christians with threats of curses.  God says to Abraham: “I will curse whoever curses you.” (Genesis 12:3). Therefore, if your General Overseer curses you, the curse will only fall on his head. If these curses were not vain, I would be a dead man already.  But I dare anyone to curse a prophet of God for doing his work. Moreover, tell the eminent General Overseer, there is nothing special about a church building.

The church is not the house of God. If it ever was, it no longer is. “The Most High does not dwell in temples made with hands.” (Acts7:48). It is morally wrong, in any case, to prescribe one conduct for the church and another outside the church. Believers don’t worship God in churches. Jesus says we worship God “in Spirit and truth.” (John 4:23). Fleecing the flock The only people authorized to receive tithes were the Levites. (Hebrews 7:5). Therefore, Daddy Freeze is right: no Nigerian prophet, so-called pastor or highfalutin General Overseer is qualified to receive tithes from members of his or her congregation. Even Jesus could not have received the tithe because he was not from the tribe of Levi but from Judah. Today, Jewish rabbis who still follow the Mosaic Code no longer receive tithes because Levi is one of the lost tribes of Israel. All Jewish genealogical records were lost with the destruction of the temple in AD 70. How then can Nigerian pastors who are not even Jewish, how much more Levites, receive tithes? In any case, God did not accept money as tithe. The tithe was tied to the land, which was God’s gift to Israel. Therefore, it was a tenth of the seed and fruit of the land and of the animals which ate of the land. (Leviticus 27:30-32).  That is why God says: “Bring all the tithes into the storehouse, that there may be FOOD in my house.” (Malachi 3:10). He does not say “that there may be MONEY in my house.” If you bring money, you must convert it to foodstuff. Your tithe is then eaten in the presence of the Lord, and given to the Levites, strangers, widows and the fatherless. (Deuteronomy 14:24-26).

However, pastors today only accept money as tithe, showing they are nothing but money-grubbers who fleece the flock. Servants who worked on the land did not tithe because the land did not belong to them. Since only agricultural resources were tithe-able, only farmers and keepers of livestock gave tithes. So if you are neither, tell your 419 pastor tithing is scripturally inapplicable to you. Law and grace John says: “The law was given through Moses; grace and truth came through Jesus Christ.” (John 1:17). Tithing belongs to the Law of Moses. But Christians are not under the law but under grace. (Romans 6:14). The law was not given to Nigerians, it was given to Jews. (Psalms 147:19-20; Malachi 4:4).

Therefore, the law on tithes is inapplicable to Nigerians. Tithing was primarily applicable to Jews in Israel. When Jewish populations grew in Babylon, Ammon, Moab and Syria, these lands also became tithe-able lands. However, tithes were unacceptable from strictly Gentile lands. So it makes no sense to tithe in Nigeria. Levites were not given any land in Israel. God says: “Instead, I give to the Levites as their inheritance the tithes that the Israelites present as an offering to the Lord.” (Numbers 18:24). But today’s pastors own lands and houses. Therefore, they do not live as Levites and should stop pretending to be Levites. You cannot cherry-pick what to obey in the law: “The person who keeps all of the laws except one is as guilty as a person who has broken all of God’s laws.” (James2:10). Therefore, if Nigerian pastors insist on tithing, they must also insist on all other stringent requirements of the law; including the stoning to death of adulterers, disobedient children, homosexuals and Sabbath violators. They should also restore blood-sacrifices for good measure.

The fact that they don’t attests eloquently to their duplicity.