Seismologists have warned that more tremors should be expected in Nigeria. Tremors are baby earthquakes and sometimes come before or after major quakes.

Kaduna has experienced several disturbing tremors in the last few days and had an earthquake sometime in July. This is quite worrisome. Unfortunately we do not have the measurements of these events on the Richter scale in public domain so our assessments are approximate. Buildings and rocks have cracked and chunks of roads have sunk.

“A seismologist, Professor Alexander Lar of the Department of Geology, University of Jos, said Nigerians should brace up for more earth tremors and probably an earthquake.” –Vanguard 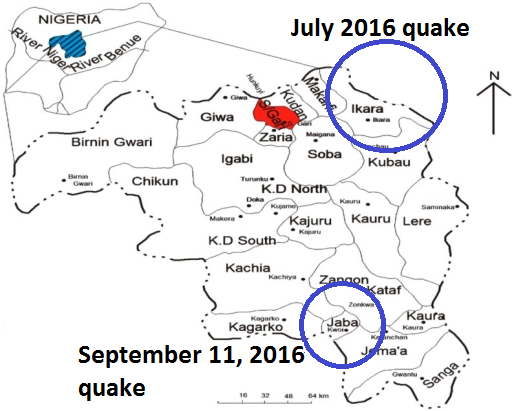 There are many reasons why this should give us serious cause to worry. Kaduna is demolition capital of Nigeria. About this time last year, Kaduna people were woken to feel their homes being demolished on their heads without court order and notice as stipulated by the Nigerian constitution. The exercise was immediately widely condemned for its illegality across the globe. The shock of the demolitions were so heavy on the home owners that at least 3 died. There has been no justice as governors enjoy immunity, and more demolitions without court order have happened since including of several properties of the Islamic movement, and more are again in the pipelines as Amnesty pleads. May the Lord and Master of the Power of Demolition not demolish Kaduna. Join me in prayer.

Again, a major atrocity was perpetuated in Kaduna 9 months back that has since been buried.

At least 370 Nigerians were killed and secretly buried in a single mass grave between December 12th and 14th of 2015. Several were abducted including 50 missing girls and several jailed since. The massacre has consumed at least 1000 victims. These included men, women, boys, girls and infants. These possibly included some saints and the many sinless infants and unborn. Many buried alive.

Nigeria has oppressed the living and  denied the dead a humane burial and justice. The evidence was buried in the grounds and the government has turned its back as have the people. Indeed the atrocities of Kaduna are not limited to soldiers or state administrators but according to accounts, Kaduna civilians participated in the massacre that took place that fateful December of 2015.

Earthquakes are signs of God’s Power and Wrath. God has in the past used earthquakes, volcanic eruptions, floods and other so-called and misnamed as natural disasters to punish people for their atrocities. The Muslim Quran in 42 verse 30 says what is translated to mean, “Whatever of misfortune striketh you, it is what your right hands have earned. And He forgiveth much.”

We must pray for Kaduna for the Almighty to not punish the people for their sins in such a devastating way. The people have turned their backs on the victims who have been extremely patient. There have been no protests to demand justice. The prophet of Islam is said to have said to “fear the prayers of the oppressed, even if he is an unbeliever, for there is no barrier between it and Allah.” Patience is the best weapon of the oppressed…as God fights their wars. The patience of the victims of the Zaria massacre is unrivaled. We should be quite afraid.

The Muslim Quran in 4:135 says what means: “O ye who believe! stand out firmly for justice, as witnesses to Allah, even as against yourselves, or your parents, or your kin, and whether it be (against) rich or poor: for Allah can best protect both. Follow not the lusts (of your hearts), lest ye swerve, and if ye distort (justice) or decline to do justice, verily Allah is well-acquainted with all that ye do.”

The Bible says: Leviticus 19:15 ESV  “You shall do no injustice in court. You shall not be partial to the poor or defer to the great, but in righteousness shall you judge your neighbor.”

Nigerians did not stand for justice. They stood for themselves.

We must pray for Kaduna and pray for Nigeria because we are all implicated. We have all turned our backs on the secretly buried. We have all moved on and embraced the oppressors. Desperate, we are carried away by our problems and have forgotten theirs.

“…And He forgiveth much.”

May the Almighty not slam more Wrath and Calamity on the north. May He not slam more Wrath on Nigeria. May He forgive us our iniquities for we have all sinned and fallen short (Romans 2:23) but it is only by His mercy that we are spared every passing minute.