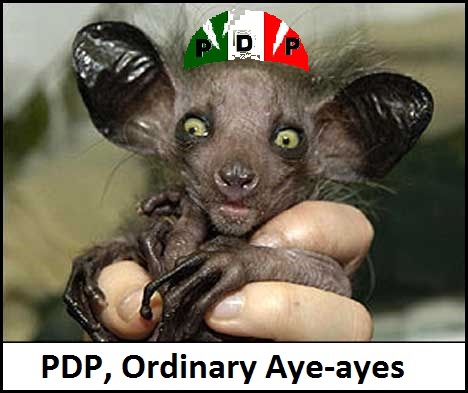 PLANS by the leadership of the Peoples Democratic Party, PDP to reduce their staff strength, slash their salaries and allowances by 50%, yesterday took another dimension as the workers have vowed to fight members of the National Working Committee, NWC with their last blood, alleging corrupt practices in the party they said cost them the 2015 Presidential election.

The workers’ revelations and allegations appeared so strong that party spokesman Olisa Metuh alleged that  the ruling party, APC has infiltrated their party.

The PDP workers have even invited  the Economic and Financial Crimes Commission (EFCC) to focus its attention on the party leadership and probe them for alleged fraudulent practices.

Protesting yesterday, the PDP workers under the aegis of the PDP Workers Welfare Association alleged that the leadership of the Party under the Acting Chairman, Uche Secondus and Secretary Professor Adewale Oladipo have lost relevance and direction to lead the party and should therefore resign and face the Economic and Financial Crimes Commission.

In a press conference statement jointly signed by the chairman of the PDP Staff welfare Association Ngozi Nzeh and Secretary Dan Ochu-Baiye, the aggrieved workers stressed that they were surprised that members of the NWC were still hanging around to kill the party after former chairman of the party, Alhaji Adamu Muazu had  resigned following the failure of the party.

The staff said, “It is curious to observe that a party which once prided itself as the biggest party in Africa could be so liquidated by such executive recklessness of its NWC members so much so that N12,000,000,000 (Twelve Billion Naira) was squandered in 9 months.

“Party members will need to know why delegates were compelled to pay the sum of N10,000 (Ten Thousand Naira) each into a private account of a company called MORUFI NIG. LTD. We are aware that over N1,000,000,000 (One Billion Naira) was realized from this fraudulent exercise. Why did the NWC compel Party members to pay sums into a company account rather than the usual party account in the same Zenith Bank?

“As part of their agenda to ridicule and crumble the party, legitimate bills owed to media houses, contractors and even cleaners have not been paid till date. Most Party members who conducted congresses and primaries that generated these huge sums have also not been paid.

“Will over twelve million members of PDP believe that even as we address this press conference… See more at: http://www.vanguardngr.com/2015/08/pdp-workers-own-up-reveal-high-level-sleaze-in-the-party/#sthash.big9Qu1I.dpuf