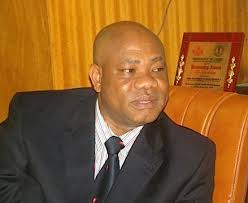 A source at the commission said the EFCC has been on the trail of the former NHIS boss for weeks after a Bureau De Change operator, Ibiteye Bamidele, named him as the owner of a $2,198,900 cash, recovered from him by men of the National Drug Law Enforcement Agency.

Mr. Bamidele was arrested on July 3 at the Murtala Mohammed Airport, Lagos, by officials of the NDLEA.

He was then handed over to the EFCC on July 8, for further investigation.

After Mr. Bamidele named the health insurance boss as the owner of the money, all efforts by the anti-graft agency to locate Mr. Thomas has been futile.

EFCC operatives, our source said, have combed every address associated with the suspect, including his known addresses in Lagos and Abuja.

Efforts were also made to locate him at the Lagos University Teaching Hospital in Lagos but that was also not successful.

The spokesperson for the EFCC, Wilson Uwujaren, confirmed the intensive search for Mr. Thomas, and the plan to declare him wanted.

He also urged…read full on PT