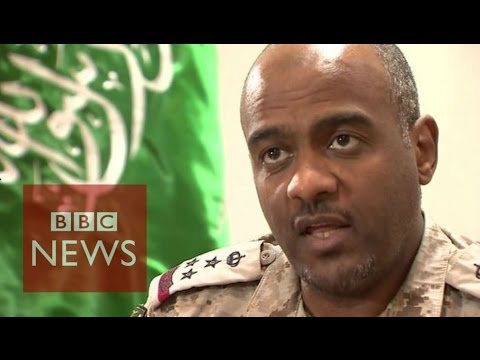 An update from yesterday’s citizen’s arrest in London. From The Guardian:

A peace campaigner tried to put Major General Ahmed al-Asiri of Saudi Arabia under citizen’s arrest for war crimes yesterday as he was entering a seminar by the European Council on Foreign Relations on the conflict in Yemen. One of the protesters outside of the event threw an egg at Asiri leaving stains on the back of his suit.

Inside, Asiri said some humanitarian NGOs were “spreading false information and deceiving people” but doing nothing to help people on the ground. He told the seminar he was delayed by “people who cannot understand the difference between protesting and attacking”.

Demonstrators protest against the visit of Major General Ahmad Hassan Mohammad Asiri a spokesman for the Saudi-led coaltion which is attacking Yemen, to the UK.

Asiri believes that people are being misled by Houthi propaganda that they’ve heard on social media. He also blames the Houthi for the humanitarian crisis in Hodeidah because they’re selling aid supplies on the black market, which is the same position held by Yemen’s ambassador to the US. He has denied that Saudi Arabia has placed a blockade on ports and believes his country’s motives have been misunderstood.

He said the Houthis used the food at the port to “sustain their fight in the ground [and] they generate money by selling the food at 10 times the market rate and then they use it for political leverage”.

Statement by the Saudi Embassy to the UK:

According to the Saudi Embassy’s twitter account, the embassy stressed that Major General was exposed to an attempt of assault by a group of protesters who were trying to disrupt his participation in the European Council Seminar on Foreign Relations to discuss the situation in Yemen. The embassy would like to thank the British police for its cooperation in protecting the place and ensuring the safe exit for the Saudi ambassador and the Major General from the building.”

You can see video of the protest and the egg being thrown in the video below.